Neighborhood near first battle site of the Revolutionary War is first in the state to undergo plant-based, benign chemistry, asphalt rejuvenating fog seal contracted by a municipal government 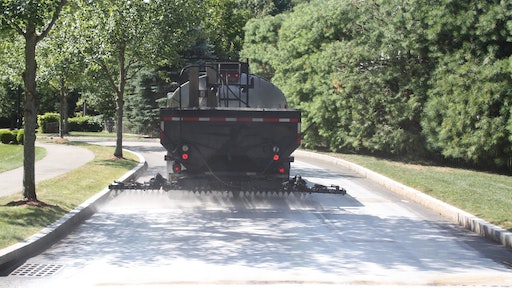 Historic Lexington, MA, has become the state’s first municipal government to commercially contract an organic plant-based product, rather than an asphalt-based product, for preserving asphalt pavements.

Contractor indus of Braintree, MA., recently treated seven streets in a neighborhood less than a mile from the Lexington Battle Green where the first shots of the American Revolutionary War were fired on April 19, 1775.

According to the National Center for Asphalt Technology (NCAT), a fog seal is a type of pavement preservation treatment applied to an existing asphalt pavement surface to preserve its functional and structural integrity and delay a more costly rehabilitation treatment in the near future. Typically, a fog seal consists of applying a slow-setting asphalt emulsion on an existing pavement surface without a cover aggregate. It is intended to penetrate into the surface pores of the pavement to seal very small cracks and surface voids as well as coat surface aggregate particles.  A rejuvenating fog seal contains petroleum or bio-based rejuvenators that restore properties of the aged asphalt binder in the surface layer, reducing the likelihood of cohesive failure within the asphalt binder film and slowing the rate of aging caused by oxidation.

Delta Mist does not require heat or agitation to apply and no cover aggregates are required on the treated pavement. It is manufactured, marketed and sold by Collaborative Aggregates LLC of Wilmington, MA, as an emulsified version of Delta S, allowing it to be spray-applied as a topical rejuvenating seal at ambient temperatures. Reported to penetrate the pavement surface up to a depth of 3/8 in., the new product is designed to soften asphalt binder to restore oxidized asphalt and reduce the loss of fines and aggregates, thus increasing pavement service life. It also aims to improve cohesion while retarding crack propagation of the pavement surface. The manufacturer notes that with proper pavement surface preparation and application rate, the new rejuvenator slows the asphalt oxidation process for up to three years with each application.

According to Lexington town engineer John Livsey, P.E., the neighborhood they chose to fog seal was ideal for comparing the two products.

“The pavements were in good condition and ready for fog seals, and they were all paved five years ago by the same contractor,” Livsey said. “Indus has been applying the petroleum-based seal for several years on our streets and we’ve been happy with its performance. However, we are constantly looking for new products for use in our pavement management program, especially with pavement preservation strategies.”

Livsey heads up the Engineering Division of the Lexington Department of Public Works. The engineering staff oversee water and sewer systems renewal and expansion and the resurfacing of approximately 260 lane miles of streets. They administer the capital budget for the town's infrastructure including water and sewer systems as well as streets and prepare and review plans, specifications and bids for DPW capital construction projects. The Division also provides engineering support for other town departments, boards and committees.

Michael Sprague, senior civil engineer for Lexington, is responsible for coordinating with The Beta Group, providing data on the conditions of town streets which the consultants use to inform the DPW’s pavement management program. This program helps engineering determine what streets need work, choose the kind of treatment and prioritize them for project scheduling.

Specifically, the program incorporates a town-wide inventory of all roadways, providing a description of each including length, width, surface type and estimated average daily traffic. It also provides condition attributes such as the type, severity and extent of distress in terms of percentage of roadway affected. This distress may be manifested by alligator cracking, linear cracking, potholes, patching and rutting. Based on this evaluation, the roadway receives a roadway surface rating and is recommended for a specific repair treatment at an estimated cost.

Preservation treatments employed by engineering, depending on the condition of the pavements, are crack sealing, fog sealing, microsurfacing and Cape Seal. In addition, the town has utilized mill & fill, reclamation and last year for the first time tried cold-in-place recycling.

Livsey and the Lexington engineering staff will carefully monitor the performance of the non-toxic, organic rejuvenating fog seal as a potential addition to the town’s growing list of pavement preservation treatments.

The contractor actually shares this goal for their own expanding list of preservation services.

Indus (formerly Sealcoating Inc. of Hingham, MA) has applied Lexington’s pavement preservation treatments for several years and consulted with Collaborative Aggregates as the new product was being developed. The contractor sought, and received, permission to try out the new product for the Lexington fog seal applications. The company has pursued the development and application of pavement preservation techniques for communities over many years. These efforts are spearheaded by the company’s sales and marketing manager, Dan Patenaude, P.E.

Patenaude spent 11 years in construction management and commercial real estate development, and ten years as Public Works Director for the Town of Wallkill in New York, before joining Sealcoating Inc. in 2012. He and colleagues promote pavement preservation treatments throughout New England and downstate New York.

According to Patenaude, there are two options in improving pavement conditions and longevity: preventive care or reactive care. He notes that traditionally many agencies’ approach is performing reactive road construction, which has a serious negative impact on taxpayers’ bottom line. In contrast, putting the focus on preservation does the opposite. He indicates that performing more frequent, less invasive treatments helps roads last longer and less costly to maintain. He adds that preservation doesn’t just extend the service life of the road being repaired, it raises the overall average quality of an entire network.