Every four years, Fort Myer Construction mills and paves Pennsylvania Avenue to ready it for the President’s Inaugural Procession 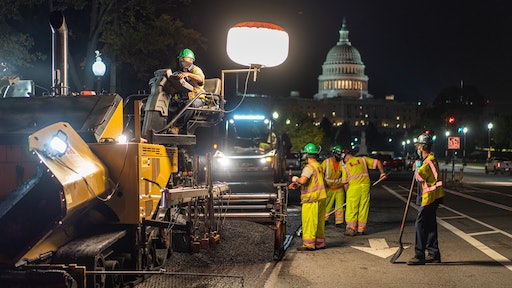 Since 1937, the Presidential inauguration ceremony has taken place at noon  on January 20, the first day of the new term. After the oath of office is taken and the president gives his inaugural address, there is a procession of the new president from our nation's capitol to the White House. Since Thomas Jefferson’s second inaugural on March 4, 1805, it has become a tradition for the president to parade down Pennsylvania Avenue from the Capitol to the White House.

Following the arrival of the presidential entourage to the White House, it’s customary for the president, vice-president, their respective families and leading members of the government and military to watch the Inaugural Parade. This parade proceeds along 1.5 miles of Pennsylvania Avenue and features both military and civilian participants from all 50 states and the District of Columbia.

As the world watches the event unfold, most are unaware of all that has happened behind the scenes to make the procession look flawless. Many are especially unaware of what events have unfolded below their feet in order for the new president to have a nice, smooth ride.

A Facelift for Pennsylvania Avenue

Fort Myer Construction is a leading contractor in the Washington D.C. metropolitan area, focusing on an array of infrastructure construction disciplines. Founded in 1972 as a small masonry and concrete contractor, the company now employees nearly 900 people who proudly help 'Build the American Dream' for the District of Columbia, Maryland and Virginia. The company owns and operates two asphalt plants in the D.C. area and offers customers various federal and state approved mixes.

Every four years, Fort Myer Construction has the opportunity to provide milling and paving work along Pennsylvania Avenue for the District Department of Transportation (DDOT) to prepare the route for Inauguration Day. This past November, they tackled the project again. The opportunity came to the company because Fort Myer is a subcontractor to Capital Paving performing all asphalt operations under the National Highway Systems (NHS) routes contract, which contains a task order to resurface Pennsylvania Avenue every four years.

"When the eyes of the world are on the Nation’s Capitol during presidential inaugurations, for more than three decades, Fort Myer Construction has been called upon to ensure the historic Pennsylvania Avenue corridor looks its best," Mike Rounds, general manager of Asphalt Division at Fort Myer says. "Our paving extends from the U.S. Capitol to the White House."

The team at Fort Myer was tasked with removing the existing pavement and putting down a new surface course. They were to complete the work over a two-week timeframe from October 20, 2020 to November 3, 2020 and perform all work between the hours of 7 p.m. and 5 a.m. to minimize disruption for those who travel along the corridor.

In all, Fort Myer performed 55,000 square yards of milling and paving work, totaling 5,000 tons of asphalt, at a 1.5-in. depth. The asphalt mix type was a District Department of Transportation approved 9.5mm warm mix with 14% RAP and 70-22 binder.

"This 9.5mm surface mix is preferred due to its finer gradation and cosmetic appearance," Rounds says. "All the asphalt came from our asphalt plants located in the District of Columbia and much of it was recycled from local roadways."

To complete the work along this busy corridor, Fort Myer had to ensure their traffic control plans were set in advance and executed precisely to keep their crews safe and help ensure the project proceeded as planned and on schedule.

"Our teams have extensive experience coordinating traffic control in sensitive areas around the US Capitol and White House," Rounds says. "We setup and maintained multiple work zones over 13 blocks of Pennsylvania Avenue to protect our crews and the public and to maintain constant vehicle and pedestrian service while contemporaneously maintaining several key thoroughfare intersections and a 20-ft wide bicycle lane running through the middle of the entire corridor."

Crew members were also cognizant of following all CDC recommended guidelines for keeping their crews safe from COVID-19 exposure.

"As an essential infrastructure contractor, we implemented COVID-19 prevention measures that we continue to practice like wearing face covers, additional sanitization measures and practicing social distancing when possible," Rounds adds.

Then the real work could begin.

To complete the milling work, the crew used used two Wirtgen 200i 7-ft. milling machines supported by two 7-person crews and twelve trucks. Each crew consisted of a milling operator, truck spotter responsible for guiding the trucks and backing them to the milling machine, and a sensor operator monitoring the cutting depth and alerting the milling machine operator of any obstructions in the pavement.

The milling crew was filled out with Caterpillar 262D skid steers and a John Deere 710 backhoe operated with attention to the detailed work around the many utility structures and brick paver crosswalks, as well as a Broce Broom RCT350 and Elgin Broom Bear sweeper and laborers. When milling was completed, the milled sections were swept and the exposed manholes and brick crosswalks were padded with temporary asphalt.

The traffic control team applied temporary pavement markings replicating the original striping before the road was reopened to traffic each morning.

"The work was straightforward, completed much like paving any other road in the region, except for the brick paver crosswalks at each of the 13 intersections along the corridor," Rounds says. "To ensure smoothness through the intersections, we utilized a 10-ft. straightedge when starting operations and tying into each crosswalk. We protected the crosswalks from tracking tack and asphalt truck tire marks using plastic sheets, sand and plywood. Our plant and field quality control technicians continuously communicated with the foreman regarding mix temperature, density numbers, smoothness and core samples thickness to ensure compliance with the specifications."

As you watch the inauguration this year, make sure you pay attention to all the details, especially that smooth asphalt the president will be driving on for the next four years.

"Working on behalf of our partners with the District Department of Transportation in connection with the National Highway System, our crews possess a tremendous feeling of pride that we are able to help our nation celebrate these historic events, and we are grateful to give back to the city and country that has given so much to all of us," Rounds concludes.