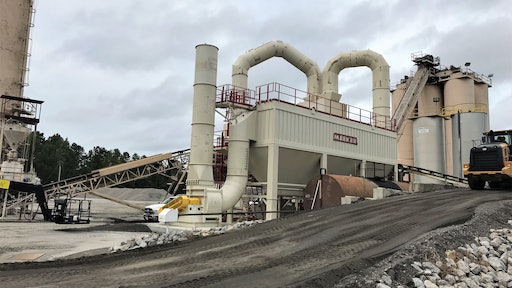 Palmetto Corporation, located in South Carolina, is no stranger to adapting their business in order to grow. Established in 1987, Palmetto is one of the South Carolina's busiest asphalt contractors and suppliers. Quality asphalt production and application is the biggest organizational core competency, but Palmetto provides a full suite of turnkey site work solutions – trucking, reclamation/erosion control, earthwork, crushing, milling, concrete and surveying.

The company started out with 10 trucks and a single 350-tph plant in Conway, SC. In 1999, they added a second 350-tph facility in Florence to meet the area's growing demand. This part of the state had seen a huge upswing in development to accommodate the steady rise in population. The company adapted to meet those demands with a workforce that has increased almost yearly. Today, the company has over 600 employees and operates a fleet of nearly 100 trucks.

With the first two plants, Palmetto's annual volume was approximately 400,000 tons in support of services that include some work for private contractors, but is focused primarily on paving for DOT projects.

The company generally tries to work within a 60-mile radius around each of its plants — initially those in Conway and Florence. Today, the company owns four asphalt plants in South Carolina, which allows them to manufacture over 1 million tons of their own hot mix asphalt at a lower cost for their customers and helps them serve a greater geographic area.

Their oldest plant, located in Conway, SC, a FabSpec Drum Plant, has been in its current location in since 1991 and has recently undergone significant upgrades to better serve their customers and the community.

The plant features six silos, two scale decks and has a storage capacity of approximately 1,500 tons. On an annual basis this location averages 185 days of 24 hour production with the remaining shifts being typical day or night production. They produce 15 different SCDOT Specified mixes and six different NCDOT Specified mixes. They also produce HMA, WMA and use RAP in 19 of the 21 different mix types. In all, this plant produces 300,000 tons each year.

"The freedom air baghouse is a reverse air unit which means we do not need a massive air compressor for operations," Eric Faulk, chief operating officer at Palmetto says. "Because of that, we are able to run higher production rate."

On top of the baghouse are multiple (one to four) stainless steel turrets that turn like a carousel. The turrets are used to clean the bags. As dust collects on the bags, clean air passes through and the dust collects on the outside of the bags. Pressure drop begins across the bags. When the turret moves to the row it wants to clean, the pressure rises as fresh outside air flows from the turret to a row of bags and the reverse air blows down the bags from the inside out (high pressure air flows to low pressure).

Meeker also uses variable frequency drives (VFDs) on the turrets to allow the turrets to move faster or slower depending upon dust loading on the bags. Meeker also allows the turrets to pulse the bags in various configurations. For example, the turrets can pulse in a line 1, 2, and 3 or they can pulse 3, 1, 2 and the system allows to pulse only half of the bags on a turret. This allows for even flow of dust from the baghouse back to the drum or batch processes.

If a turret ever goes offline, the baghouse can still operate. The operator simply takes the selected turret off-line and the plant continues. This is another unique feature of the Meeker Freedom baghouse.

All of this was impressive to Palmetto, who immediately saw benefits of the installation over the previous FabSpec Baghouse unit.

"When it comes to maintenance of the meeker bag house, because it is a reverse air, we do not have to bother with blow bars and Venturis when doing maintenance to the bags which saves time and money." Faulk says.

The company also saw benefits to their community with this new install.

"Producing with less emissions is a huge benefit to us and the communities we serve," Faulk says. "The new baghouse is extremely efficient and not only met the SCDHEC requirements but has greatly exceeded those allowable limits."