Economic impact of union construction in northeastern Illinois provides workers a ladder to the middle-class that stabilize the state’s economy by creating downstream jobs, reducing demand for social services and boosting GDP along with tax revenues 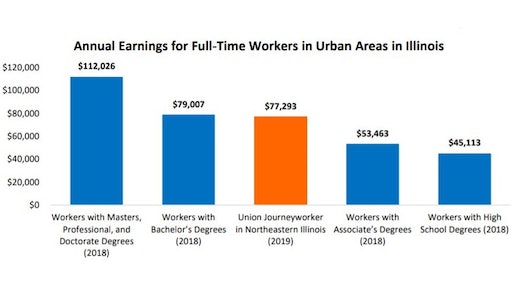 The Economic and Fiscal Impacts of Collective Bargaining Agreements in Construction

New data released by the Bureau of Labor Statistics show that in 2020, 10.8% of American workers belonged to a union, up from 10.3% in 2019. It was the first increase in the rate of unionization in the U.S. in over a decade, driven by the year's 9.6-million worker decline in total wage and salary employment. The previous week, the Illinois Economic Policy Institute had issued a report on the effect of collective bargaining agreements in construction unions in northeast Illinois as the economic impact of the COVID-19 pandemic made clear how important good-paying jobs will be in the entire state’s economic recovery from the pandemic's economic stranglehold.

The report’s authors say the coronavirus pandemic “has revealed structural economic inequities in Illinois, with essential workers and those in ‘face-to-face’ sectors most at risk of being exposed to the virus also earning lower wages, suffering from the highest job volatility, and having the highest likelihoods of losing their employer-sponsored health insurance. The pandemic has also occurred on the heels of rising inequality, with the inflation-adjusted incomes of the top 1% in Illinois growing by 35% since 2000 compared with a 3% drop in annual income for the median household.

“Recovering from the severe economic recession caused by the public health emergency will require rapid growth in good jobs that not only provide family-supporting incomes, but also ensure access to quality health care coverage, paid family and medical leave policies, and retirement plans.”

An essential industry that has consistently provided middle-class jobs is construction, with about 232,000 wage and salary employees in Illinois. In 2019, the construction industry contributed $30.9 billion towards Illinois’ gross domestic product (GDP).

“The primary reason Illinois’ construction industry delivers good middle-class jobs is because it is highly unionized with strong collective bargaining agreements,” according to the report.

Collective bargaining is the process where workers join together in unions and negotiate contracts with their employers that establish terms and conditions of employment such as pay, hours, time off, health insurance benefits, retirement benefits, safety procedures, and other workplace policies.

Collective bargaining is protected by the United States by constitutional law. The 1935 National Labor Relations Act granted collective bargaining and organizing rights in the private sector. But those rights have become increasingly inaccessible to the overwhelming majority of the US workforce in the ensuing 86 years.

Numerous studies have found that collective bargaining boosts wages for workers, specifically for low income employees, for middle-class workers, and for people of color. On average, union households earn between 10% and 20% more than nonunion households – an income premium that has been consistent since the 1930s. In Illinois, for every $1 paid in union dues, more than $6 is returned to union members in after-tax income each year.

The report’s authors applied a comparative model that simulates outcomes if all 97,000 Chicagoland construction workers suddenly worked without collective bargaining agreements. The data reveal that the total incomes of skilled construction workers would decrease by $2.8 billion annually without CBAs. These workers would experience pay cuts that would move them from solidly middle-class into the lower-middle class.

The authors of the report conclude: “Across all of Illinois, collective bargaining agreements promote the American Dream, expand health insurance coverage, decrease poverty, and reduce reliance on government assistance programs among skilled construction workers. In an era when the state is in urgent need of good jobs following the COVID-19 pandemic, elected officials, the media, and the public should look to the example of Illinois’ more heavily unionized construction industry as a way to promote family-sustaining careers and economic growth.”