While an increase in nonbuilding construction starts couldn’t offset a decline in buildings in February, general economic recovery could hold hope for construction growth. 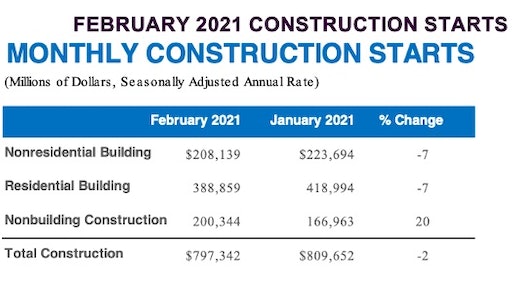 In a forward-looking podcast discussion, Richard Branch, chief economist for Dodge Data & Analytics, acknowledged that the construction sector is struggling to gain traction. “On the nonresidential side, whether that be… commercial properties or schools or even infrastructure, that activity is lagging due to either an overhang in supply and growing budget gaps at the state and local level, or rising material costs,” he noted. Material costs have been accelerating rapidly over the past few months.

Yet, single-family construction and warehouse construction have continued to post solid growth over the past month, showing there are bright spots in certain market sectors. Regionally, starts fell lower in the South Central and West regions but moved higher in the Midwest, Northeast and South Atlantic Regions.

“With spring just around the corner, hope is building for a strong economic recovery fueled by the growing number of vaccinated Americans,“ said Branch in response to February’s data. “But the construction sector will be hard-pressed to take advantage of this resurgence as rapidly escalating materials prices and a supply overhang across many building sectors weigh on starts through the first half of the year." 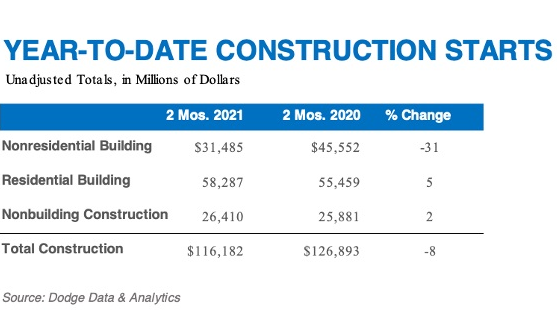 Looking ahead, Branch indicated in the podcast that the industry is likely to see “stability this year” rather than substantial overall growth, with acceleration of activity in 2022.

The largest nonbuilding projects to break ground in February were the:

Nonresidential building starts fell 7% in February to a seasonally adjusted annual rate of $208.1 billion. Institutional starts declined 8% despite a strong growth in healthcare. Warehouse starts fell back following a robust January, offsetting gains in office and hotel starts and dragging down the overall commercial sector by 8%.

The largest nonresidential building projects to break ground in February were:

Both single-family and multifamily starts fell 7% in February, resulting in total residential building starts slipping 7% to a seasonally adjusted annual rate of $388.9 billion.

The largest multifamily structures to break ground in February were: