Profile of contractor Custom Concrete and the project that won them the Concrete Foundation Association’s 2020 Commercial Project of the Year Award. 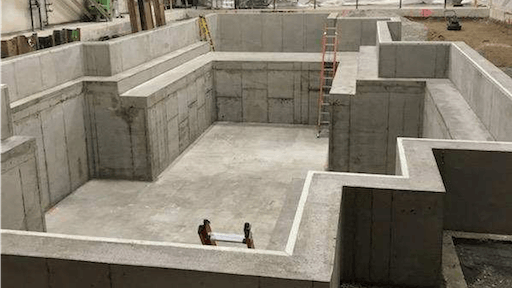 The commercial and residential contractor, Custom Concrete is a family-owned and operated company going on 50 years young. They celebrated their quinquagenarian anniversary in April 2019. For three generations the company focused primarily on residential foundations. To further diversify work offerings, about eight years ago they added a commercial division.

Six years later, it turned to be an advantageous decision and became its own standalone company within the Custom Concrete umbrella. Including the subcontractors, the company is comprised of roughly 250 employees, about 50-55 are in the commercial division.

One of the largest challenges for Custom Concrete has been personnel. They’ve found a short-term solution with subcontracting more, but then discovered that’s a double-edged sword: even the subcontractors are challenged with personnel.

On top of that, COVID. While the business was able to qualify as essential, they discovered like many other concrete contractors around the country, that a number of clients did not. While they experienced some stalled projects or some projects not move forward at all, others ramped up and were able to pivot their strategy to take advantage of those opportunities when they came by. One tactic was to bid more aggressively—or more robustly. They pursued where they could in the opportunities within the commercial market like warehouses for Amazon and Walmart. The pandemic also brought an opportunity in the construction of a laboratory for diagnostic equipment for COVID testing.

It is this Commercial Division that earned the company its recognition from the Concrete Foundations Association (CFA). Its commercial project for Lafayette, Ind., won the CFA’s 2020 Project of the Year Award for Commercial Structure. Where they are typically known for foundations—this project brought them placing a foundation of a different kind.

“Projects of the Year is a program that delivers recognition of the combination of innovation, craftsmanship and creativity of the concrete contractor as well as the vision and creativity of the design professional. Projects submitted annually to this program represent the leading work across the breadth of cast-in-place concrete solutions produced by association members. They demonstrate the technical challenges overcome by the professional craftsmen found throughout North America and continue to set a new standard for quality and technological achievement for the cast-in-place industry.”

Additional recognition programs from the CFA include:

Project submittals for 2021 are now open with a deadline of April 30.

Commercial Project of the Year

Custom Concrete’s 2020 CFA Commercial Project of the Year ended up being an isolation base for stamping press for a major automobile manufacturing plant. Picture a stamp coming down onto a raw piece of plate steel to cut out a part, because it takes so much volume and pressure, the foundation needed to be isolated to not shake the surrounding foundation every time. 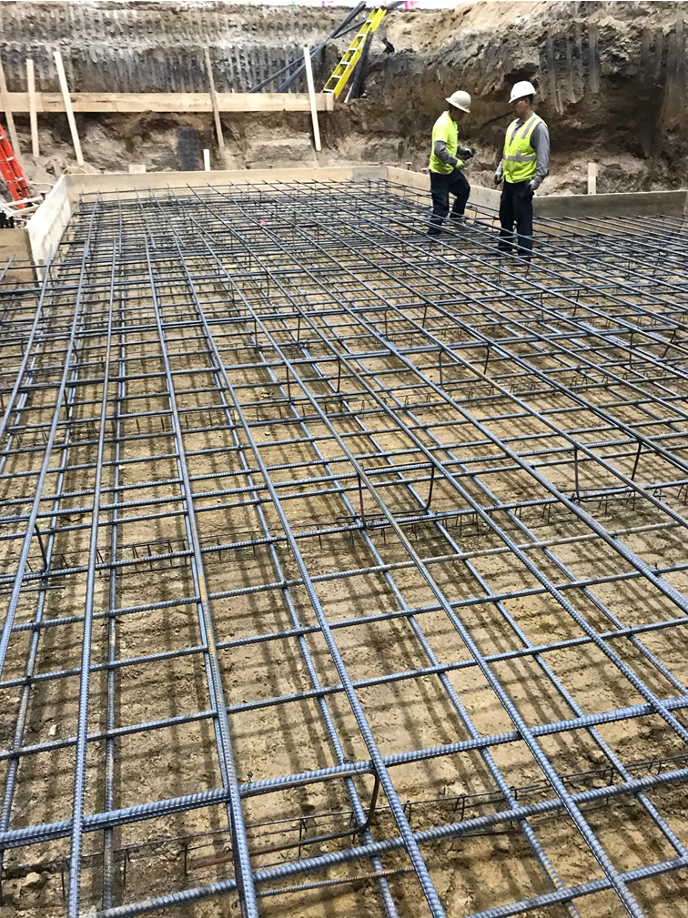 It is here that Custom Concrete had to overcome their first challenge: all work had to be done indoors and while work was ongoing all around them with active employees and processes. High safety standards had to be met without disrupting production which was a logistic challenge all around to balance productivity and safety. On top of the limited indoor space, material and equipment were bottlenecked. Everything needed to travel in and out through a single point of access to the location inside: one overhead door. A 100- by 50-ft. area was made available to them to collaborate, but even then this area wasn’t always available. They installed a dust curtain with an air scrubber around the project itself (also roughly 100 by 50 ft.) to contain airborne particulates and emissions.

In essence, picture a swimming pool with a base featuring a joint around the perimeter with foam insulation as a buffer. Contractors dug a 12-ft. hole in the middle of the existing building next to existing foundations and placed 300 cubic yards of 5,000-mix concrete.

The majority of the concrete needed to be poured at once, but because of its 9-ft. thickness (roughly), it was important to keep the temperature consistent throughout so it cured correctly. The team utilized three battery-operated sensor/thermometers in the concrete to track the temperatures to ensure it cured as needed. The device connected to a phone and synched via wi-fi providing readings and the necessary data. They placed one at the bottom elevation, one mid-elevation and one at the upper to track the curing through the entire slab. 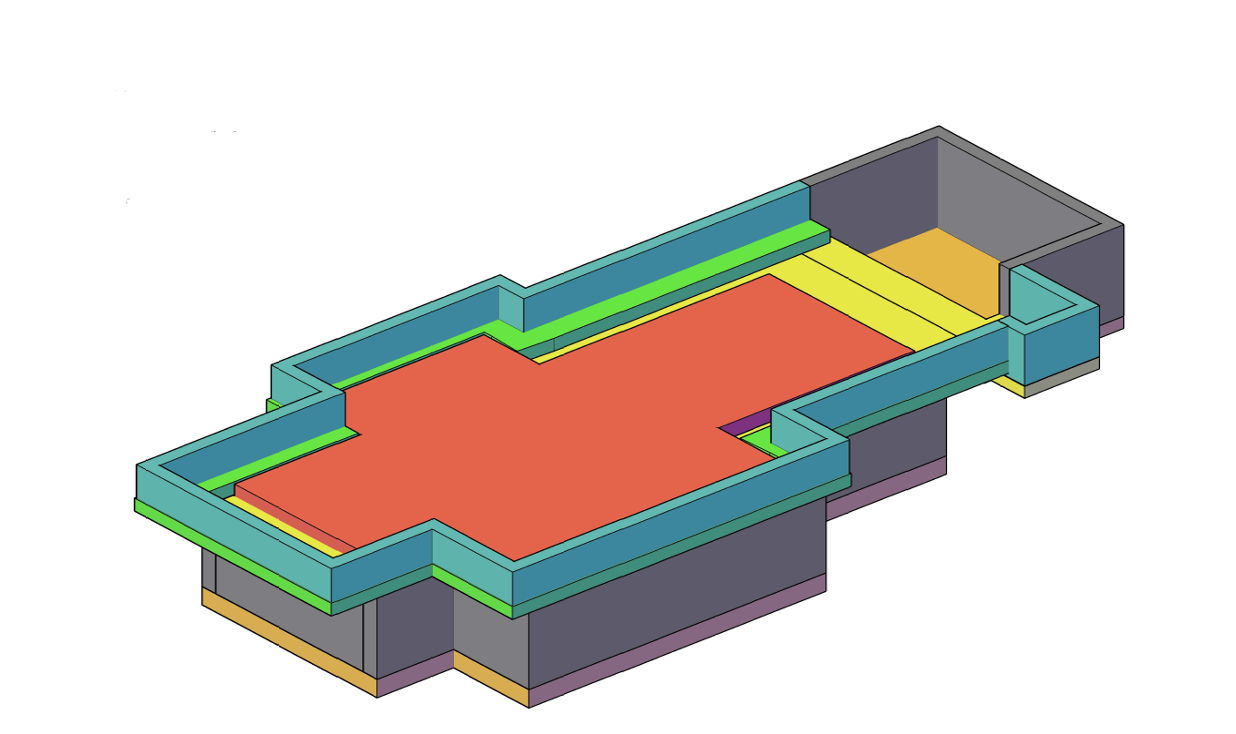 The job required a high level of accuracy and pours were done in phases. The lowest pad was 24-in. thick.Custom Concrete

Plans had to be thought of from the pit bottom and up. Each step carefully planned out. The base was poured then the foam to isolate the block from the rest of the facility. Using 2x4s at the top, the dowels required a specific spacing to support the weight of the concrete—else the plywood would break. Screws from the 2x4s held the dowels in place. Once the seams were taped and a Visqueen barrier was used to keep the concrete from adhering to the plywood—concrete was then ready to be placed. 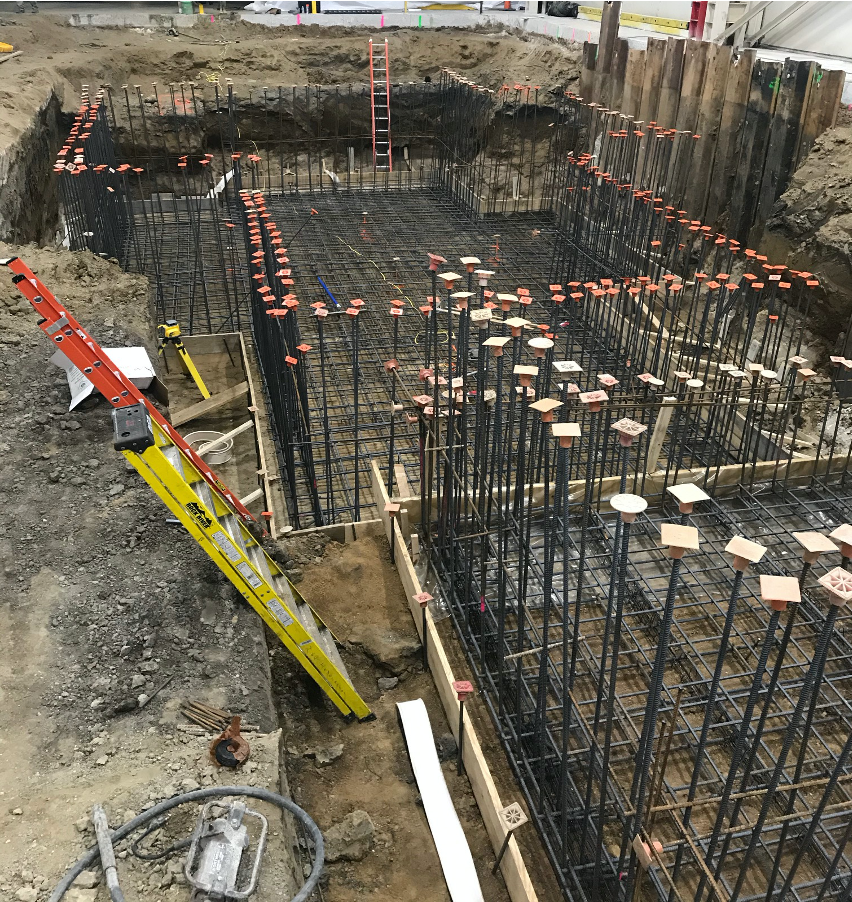 Custom FoundationOne of the special specifications in the job included a vibration isolation foam called Regufoam, which they acquired from Unisorb, which required itself a 1.5-in. air gap. Quick on their feet, they discovered a quite clever solution to overcome this challenge – through the thickness of the form itself. Custom Concrete installed 3/4-in. plywood with 3/4-in. slick dowels. Once cured and the dowels and plywood removed, they had their needed gap space. The experience was a learning curve, but representatives for the Regufoam product were available for any questions regarding the installation. 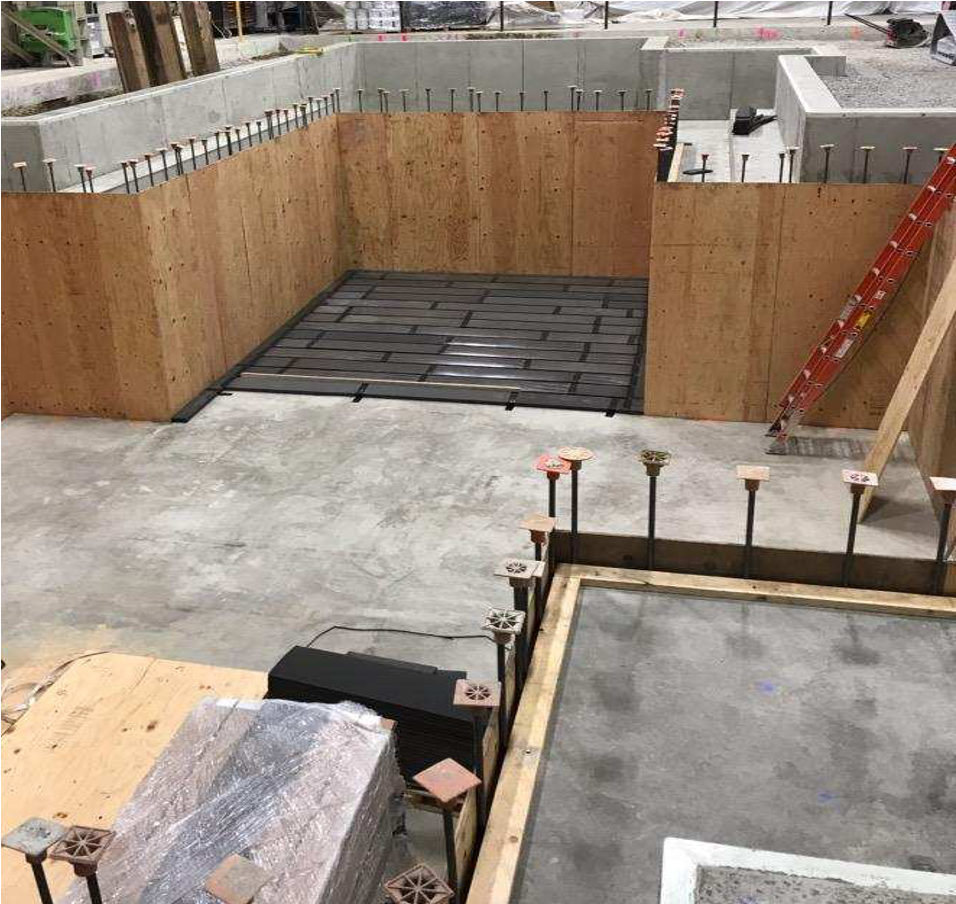 Custom ConcreteThe placement has to be precise. Heavy machinery was planned to be placed at the location and it needed to be level to the rest of the work floor. Custom Concrete needed to accommodate for the pressure of the weight and the absorption in the Regufoam. This required exactly 5/8-in. of concrete to be placed higher than the finished floor.

Besides that, Custom Concrete needed to think on their feet to get the heavy equipment down the 12-ft. deep project area (and then out again) as well as removing the slick dowels themselves. The manufacturing client, allowed them to utilize an overhead crane.

They ended up utilizing a subcontractor for the pump truck and poured during the week of Christmas. At first, they set up a pump inside, but later foot traffic inside the building limited this efficiency. A pump truck with a z-boom was set up outside and connected through the overhead door to the next pump—piggybacking or daisy-chaining pumps together to get material into place. The z-boom design allowed Custom Concrete to use a 30-meter pump accommodating the low clearance.

Custom ConcreteUnique challenges aside, they actually ran ahead of schedule. In fact, they poured the actual base two weeks prior to the original plans. The deadline was at the end of January and wanted to give the block a full 27-day cure.

Since the client was going to place heavy stamping manufacturing equipment on top, no polishing was done. The only finishing that was applied was a slick finish and drilling to set equipment anchors.

CFA Project of the Year Awards