A Vision of the Long Road Ahead 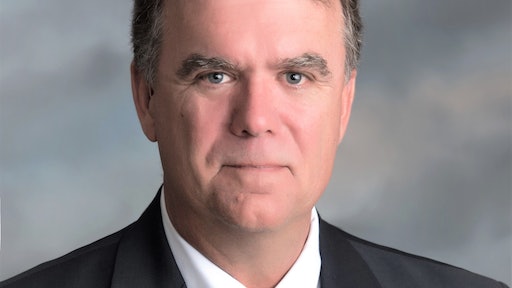 Following the trend of virtual meetings and Zoom calls, the American Concrete Pavement Association (ACPA) had its 57th Annual Meeting online. Amidst an interchange of mute buttons and cameras, on Dec. 3, a white gavel was passed to David Howard, the president and CEO of Kansas-based Koss Construction Co., to mark the start of his new role as the new ACPA Chair of the Board. Howard took over from the previous Chair, James Mack, P.E, Director, Market Development – Infrastructure with CEMEX.

As a volunteer position, the chair supports and sustains the work of the Association and provides governance leadership and strategic support. This is a seat three years in the making; while nominated to the position, one sits as 2nd Vice-Chair and 3rd Vice Chair prior to appointment. This assures a smooth transition each year as the gavel passes from one to the next.

The Board Chair sits as a partner to other board members, the president, and CEO, and communicates with the president and CEO regularly. Responsibilities include presiding over board meetings, leadership on issues, and plans being pursued by the Association. The seat also serves as the ambassador of the association by interacting with members, the network of chapters, research and technology partners, and public officials. Research and technology partners include the National Center for Concrete (National CP Tech Center) at Iowa State University, the International Grooving & Grinding Association, and the Innovative Pavement Research Foundation.

“There’s more”, says Bill Davenport, VP – Communications of ACPA. “Including some strategic oversight, fiduciary responsibilities, but in general, the Chair sets a course of action for our staff, affiliates, and members to follow each year.”

Headquartered in Rosemont, Ill., as well as an office in Washington D.C. supporting its public policy and funding advocacy efforts and federal agency relationships, the ACPA was founded in 1964 with the primary mission to advocate for the use of concrete pavements in surface transportation applications. The association has approximately 400 members with contractors making up about 55% of the membership. Members can range from concrete pavement contractors, cement companies, materials and equipment suppliers, and others.

“On a day-to-day basis we are addressing a wide range of topics, including inter-industry competition, concrete overlay technology, performance-engineered mixtures;  funding and public policy decisions (notably the support of a robust and adequately funded Federal-aid highway bill and Federal-aid airport legislation); research, technology and innovation aimed at pavement quality; sustainability and pavement resilience; downfield issues that may impact transportation-construction 10 to 20 years into the future; and more” explains Davenport. There’s more, but – put simply – it all comes down to providing the best pavements consistently over time.

Howard has been involved with the ACPA early in his career, since the 1990s, and sees this new role as a way of giving back to the association. As the primary trade association for concrete pavement products, “they’ve been the number one advocate for the company and the products that we sell, both on a technical and a relationship basis – especially the federal and state levels,” says Howard. 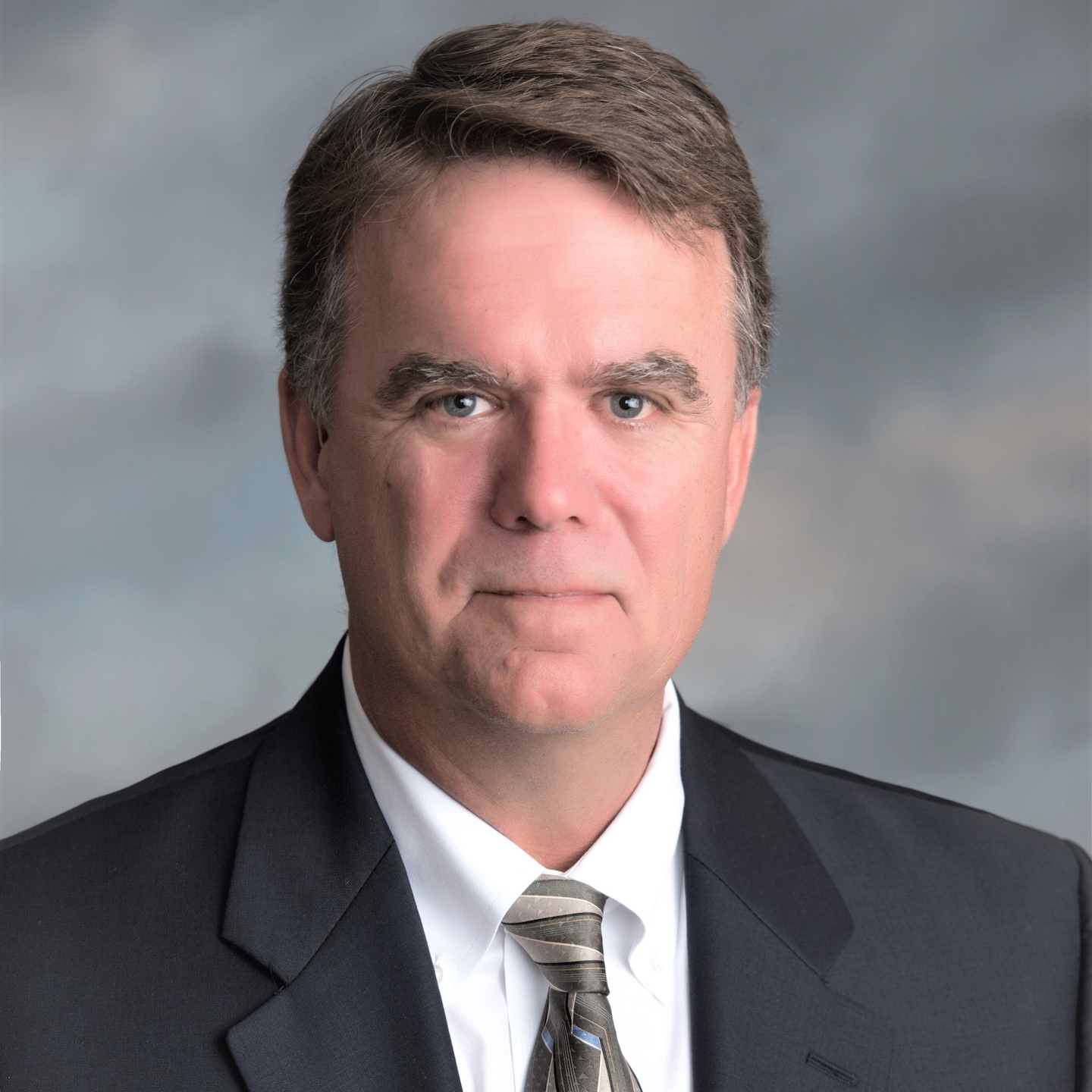 David Howard, CEO of Koss ConstructionKoss ConstructionHe has also had other leadership roles within the ACPA. As the chair of the ACPA Strategic Advisory Committee, a sort of prerequisite to leading the board, he made a significant impact and paved a new path. “He had a vision for taking a different approach with our strategic advisory committee and the task forces that existed at the time,” says Davenport. Howard's vision had taken the existing advisory groups and had them focus on specific areas. The Association recast the model of its groups to create a highways market, permit airport market for streets, roads forum, and an industrial forum.

“These firms and committees are…already making a very dramatic difference that, I think, we're going to see that continue,” says Davenport. “[David] has a vision for carrying the association well into the 21st century.”

The goal or function of the Strategic Advisory Committee, explains Howard, is to engage membership and distill what membership sees where the association has blind spots in marketing, technology, legislative, or membership engagement. The committee provides a mechanism to act on what they need to do. The committee attempted to meet the entire membership once or twice a year – and when new things come up like COVID, Howard found it not the most efficient way to engage.

“The vision was simply to restructure this in kind of a matrix organization chart,” he says. One axis of the matrix being the functional expertise in pavement design, another in communication, in marketing, in legislative affairs, in construction, etc. “Our staff at ACPA, we have all these things – so we split them up in smaller teams.”

He planned a roadmap to create interest-based “focused” forums for members seeking more information on a specific type of project to, hopefully, produce an efficient action out of the experts in the Association.

Founded in 1912 by George Koss, Koss Construction began working with infrastructure. Then, as many businesses had to adjust in response to the post-World War II world, the company’s focus changed to concrete paving – working on a lot of bridges – as well as asphalt.

Of note, the company received the first highway contract back in 1956 with a stretch of I-44 in Missouri. In 1970, they completed the first interstate contract with the I-70 in Kansas. “The company has paved an awful lot of airfields in the Midwest,” says Howard. Interestingly enough, they also did the airfield in Roswell, New Mexico in the 1950s.

“If you drive through the Midwest – Arkansas, Oklahoma, Kansas, Nebraska – you’ll drive through one of our projects,” says Howard. 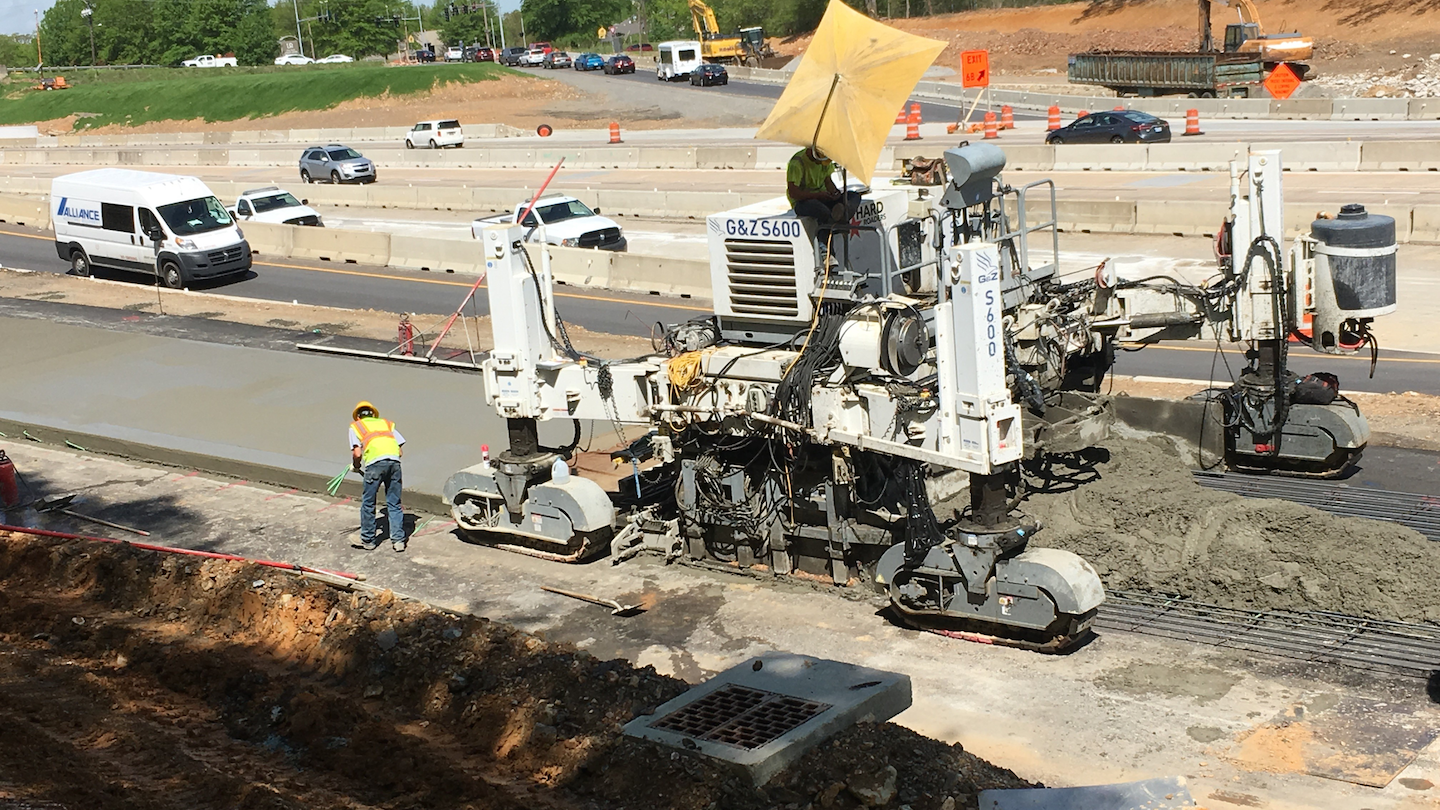 Construction of the I-630 highway in Little Rock, Ark.Koss Construction

Employees are proud of their work and many of the companies wear this on their sleeve, literally, along with the title “hard roader.” As explained on their website, “these men and women, laborers and craftspersons, engineers and foremen who are Hard Roaders are all experienced in their trades and take great pride in recognizing high standards.” Employees earn a small red star per five years with the company. The full-time staff runs about 75, but balloons to 200 during the construction season. 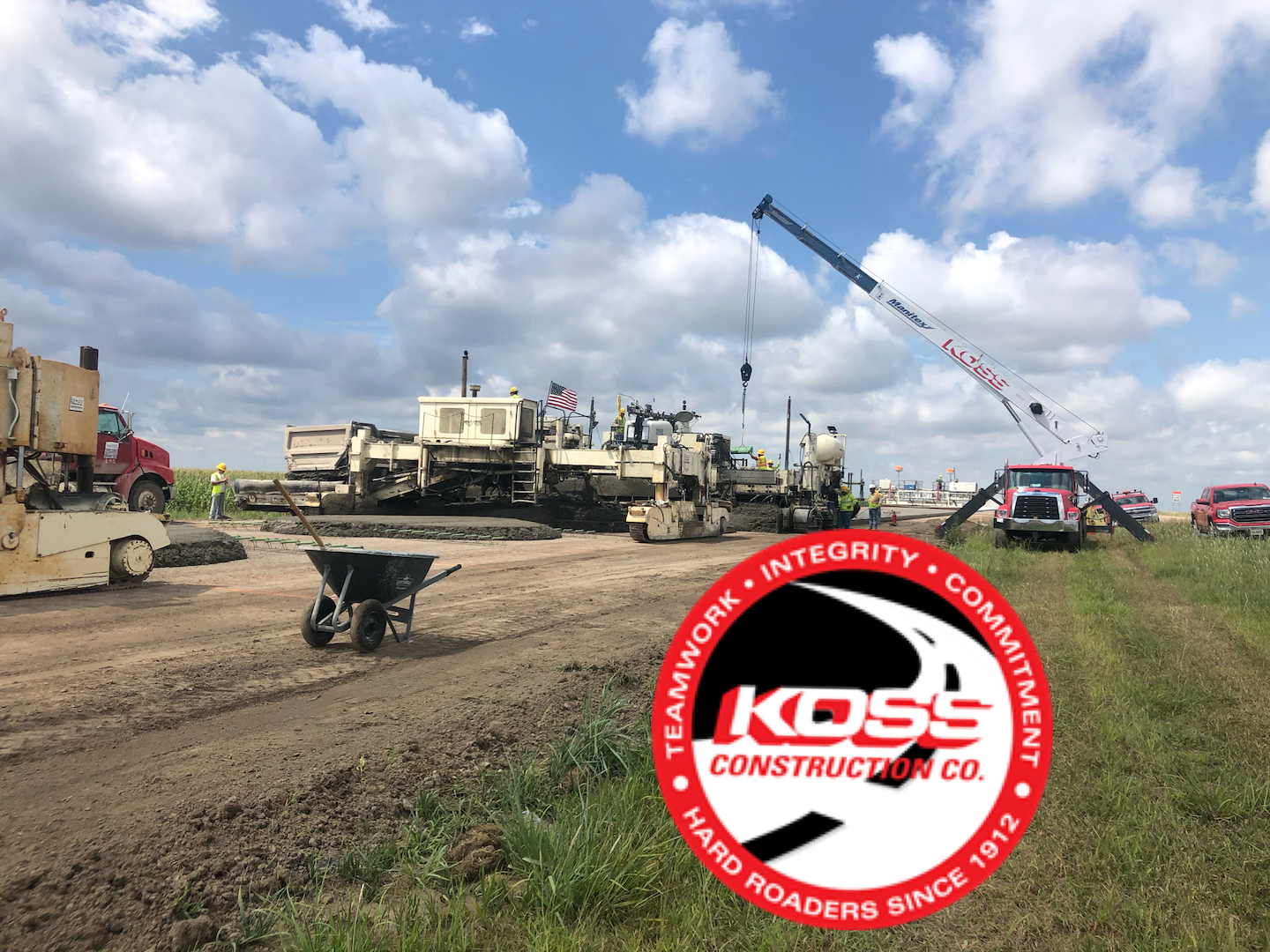 Construction of the I-70 highway in western Kansas.Koss ConstructionWork continues for Koss Construction. Their 2021 includes business as planned with interstate projects through the Midwest: Kansas, Missouri, and Nebraska. They’ve also worked on a number of airfields. At current, they’ve returned to their historic roots. Howard explains that half of the company’s business has been by interstate reconstruction.

With such an area to cover, it’s to their benefit to be as mobile as possible. Shipping heavy materials can be costly so bringing what they need to the site helps them be more effective.  “We only work on highways, and for the most part just the larger projects,” says Howard. “We produce our own concrete and have mobile concrete plants. We mobilize to a project with everything that’s required to do the project – the plant to produce the concrete, the equipment to the old roadway. Production is more cost-effective.”

With each state only doing large interstate projects only two, three, or four times per year, Howard finds it necessary to “cast a wide net.” 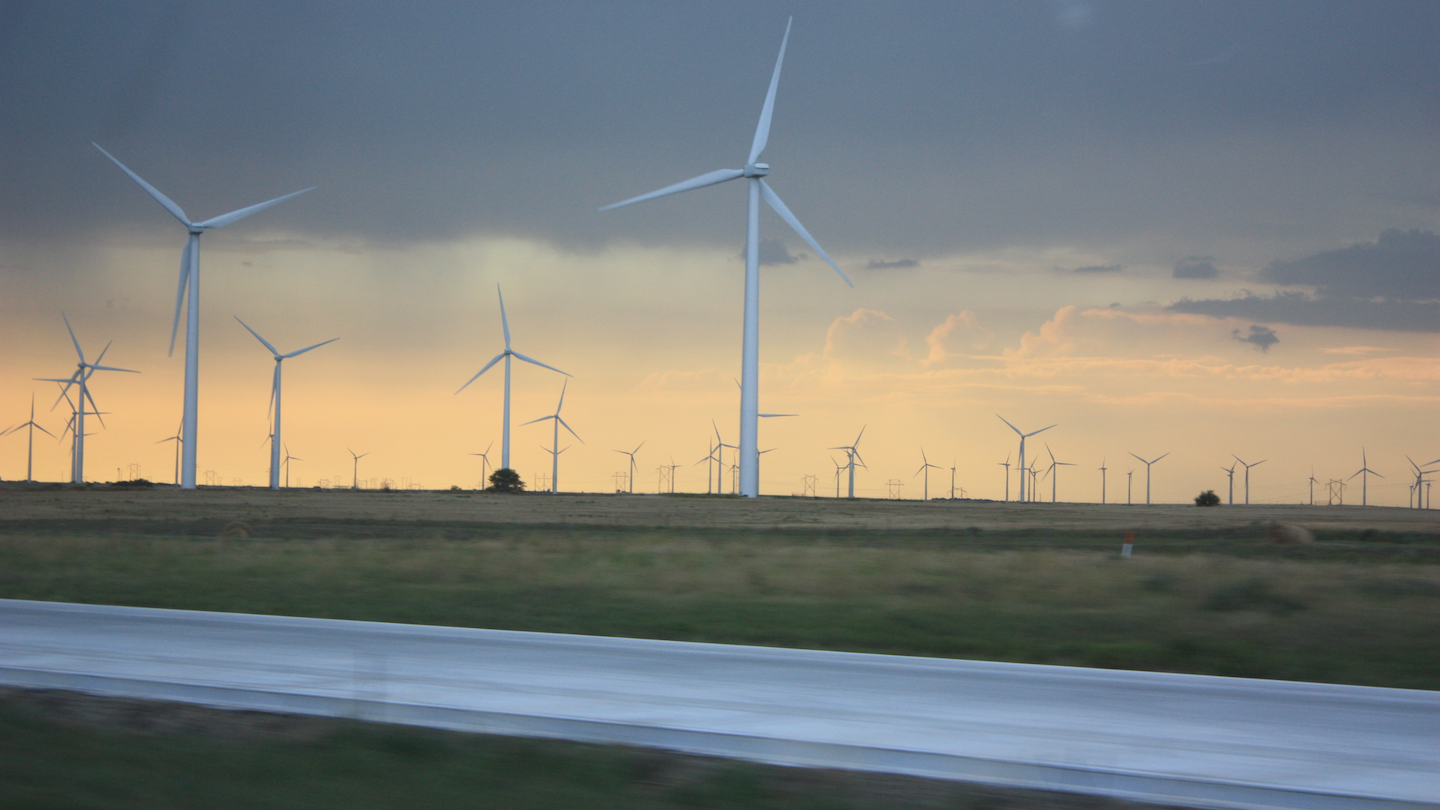 Windmills tower over the horizon with the 6x6x6 pavement slab of the western Kansas I-70.Koss Construction

“The ACPA is very good at what it does,” says Howard. “It has a nice toolbox of resources, both on the technology front…and we have a network of chapter state organizations throughout the country. I think we’re keeping our eyes on the road, looking ahead, and providing stability. Because in a time of change, you don’t want to get caught up in the minutiae – we have things to do, no matter what gets thrown at us.

Through hard work and determination, Howard values focus. He imparts this piece of advice, “Somebody once said to me, when you get into executive-level positions, one of the strongest things you have to lean on is that you have pretty much seen everything before. There may be some nuances and some changes, but it’s the time-tested ability to deal with whatever comes up and maintain focus on the agenda.”

Pushing construction technology further to get real time data from concrete sensors, Purdue researchers have been working on a years-long project to investigate the value of integrating concrete sensors with the internet of things.
Jonathan Kozlowski
February 3, 2021
Follow Us