The Concrete Foundations Association explains the code reference and common misconceptions regarding oil on rebar for residential concrete. 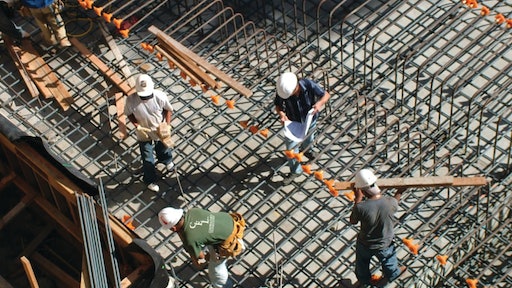 In its Overall Grand Prize winning project in the 2013 Concrete Foundations Association Project of the Year Awards, Ekedal Concrete utilized 191 tons of steel in the foundations and footings of an 11,000-square-foot, seaside home.

Question: On several of our most recent residential projects, the inspector in our area has been complicating our pour schedule when finding form oil over-sprayed on the rebar in our walls. Is it our misunderstanding that form oil on rebar shouldn’t pose a problem to the wall performance or the acceptance of our pre-pour inspection? – Concrete Contractor (Ohio)

Answer: Your question addresses a common problem across the construction industry that is created as codes are modified over time. Regardless of the comparison of residential to commercial work, code edition after code edition presents challenges to professionals throughout the industry to remain current with the latest acceptable practices and minimum requirements. In the specific case of the acceptability of form oil sprayed on rebar for residential applications, this is both a question of appropriate code reference applying more properly to the residential concrete code — ACI 332 — rather than ACI 318, and of referencing the most recent version, ACI 332-10, instead of older versions -04 or -08.

Appropriately referencing ACI 332-10, your inspector and you can develop a common understanding of this issue based on the presented reference. Stated in section 4.2.4 of ACI 332-10, the code provides:

4.2.4 Surface conditions of reinforcement—At the time concrete is placed, deformed bar and welded wire reinforcement shall be free of materials deleterious to development of bond strength between the reinforcement and the concrete.

R4.2.4 Common surface contaminants such as concrete splatter, rust, form oil, or other release agents have been found not to be deleterious to bond.

This version of the residential concrete code presents two issues that are significant to this topic and to the successful resolution of the argument. The first is that during construction, nothing should be found on the reinforcement that would adversely affect the bond strength of the reinforcement in the concrete. The inspector on your project is rightly wanting to make sure the purpose for the steel present in the concrete is successfully achieved, or at the very least, not voided by preventing such a bond. However, the second issue is equally as important even though it occurs in the commentary. Referencing significant industry research, the explanation is given as to what common site conditions found on rebar are not to be considered deleterious to bond. As you might expect, form oil is one such surface contaminant that is not to be considered deleterious to bond.

The obvious next question in your discussion might be why such a surface contaminant is not deleterious to bond. This is the purpose of the reference to the type of reinforcement found in the code section. Deformed bar and welded wire are both designed to achieve a mechanical bond with the concrete rather than a chemical or adhesive bond. The mechanical bond relies on a keying action with the deformations along the length of the reinforcement bar. Therefore, as long as the surface contaminants do not effectively eliminate the presence of those deformations, they would not be considered deleterious to bond.

The presence of this information in the residential concrete code was achieved through a meticulous consensus process through ACI. This included committee work and public review in addition to the required reviews by technical standards committees. Throughout this process, the work Bruce Suprenant and Ward Malisch completed on a series of bond pull out tests was found to be extremely beneficial to ensure the purpose for the presence of steel in concrete was sufficiently maintained. The results, based on 27 tests of bars with nine different surface conditions, show that the contaminants didn’t adversely affect bond. (Surface contaminants included form-release agents, curing compound/bond breakers, cement splatter, motor oil and rust.)

The impact of the research is clear; the performance of steel reinforcement bars in concrete relies on the tension force created from concrete consolidated (or gripping) the bar at the deformation points. This research has been published since 1998 and has been referenced in numerous documents and articles, including industry standards and guides. ACI 332 is currently the only code reference to the acceptability of this issue; however, this document is given jurisdiction by the International Residential Code.

As with any issue between a contractor and an inspector, I want to encourage you to enter into a conversation before the pre-pour inspection and document the acceptable references as indicated. Knowledge is the best way to address differences of opinion and a common ground can be achieved when both parties are given the same tools for making the decision.

ACI 332-10 is available through the bookstore at www.concrete.org.

Show Us the Data