In surface preparation, there are a number of things to consider when selecting a metal-bond diamond abrasive. Start at the concrete floor and figure out what you’re working on. 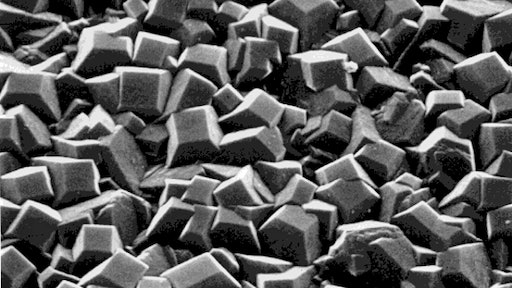 One of the most common mistakes a contractor can do with a new concrete grinder is not take any training for it. There’s a lot you can learn with videos online, but in order to really understand polishing or concrete grinding it’s recommended to get training from the manufacturer of the product you own. Each type of grinder has its own features, its own benefits, its own performance. If you don’t know exactly what your machine can do, you might not get the intended result—which can cost you time and money.

On top of that, making sure you choose the right abrasive tooling for the job can greatly affect how effective you will be. Use the wrong bond on the wrong slab and you’re back to grinding into your deadlines and eating away at your profits. “There’s two sides to it, it either is going to cost you more time, or it’s going to cost you money in tooling,” says Brian Wilson, President of WerkMaster, a manufacturer of concrete surface preparation equipment. WerkMaster conducts regular training sessions for customers and non-customer contractors.

“For example,” he says, “let’s say 1,000 ft. takes an hour to grind. As [the concrete] gets harder, when they get into the seven, eight and nine concrete—that time can change from one hour to two, three, and even up to four hours. Same machine. Same tooling. Wrong bond.” This also applies to using a mismatched tooling on softer concrete.

• Ask your manufacturer about training.

• Know the hardness of your concrete.

• Re-check the hardness of your concrete.

• If you call for help, take photos.

Before rolling out the machine onto the floor, Wilson strongly advises in understanding the concrete floor you’ll be working on first. One such way in doing so is with a Mohs harness test kit. Knowing how hard your concrete is pivotal to choosing the right abrasive for the job at hand.

The Mohs Hardness Scale rates concrete on a scale nine to one and it’s at the high and low extremes where complications arise. Hard concrete (nine, eight, or seven) produces a fine dust. WerkMaster explains, “This dust is not abrasive and does not wear the metal matrix of the diamond segment sufficiently. The result is that the diamond grit soon becomes exposed. The segment stops grinding and the segments can get hot and glaze over. A tool with a soft bond is required in order to stay dressed and expose diamonds in order to keep cutting.

“Grinding soft concrete [rated at three, two, or one] requires ‘hard bond’ tool that resist the metal matrix being eroded to quickly from the abrasiveness of the cement dust. The sandy and abrasive dust will erode tools quickly. Grinding soft concrete is when contractors fail be aware of the signs of rapid grinding and fast wear to their tooling.” Concretes at a six, five, or four hardness are considered medium.

Location matters. Hardness can vary depending on geographic locations although one should only use it as a guideline. For example, Arizona concrete is known to be harder due to the volcanic rock in the concrete. Meanwhile, due to the shells commonly used, the concrete in Florida is typically much softer. Regardless of where you’re working since you don’t know exactly what was done at the batch plant, Wilson stresses the value in continuously scratching your concrete. “It’ll give you an indication of what you’re up against,” he says. 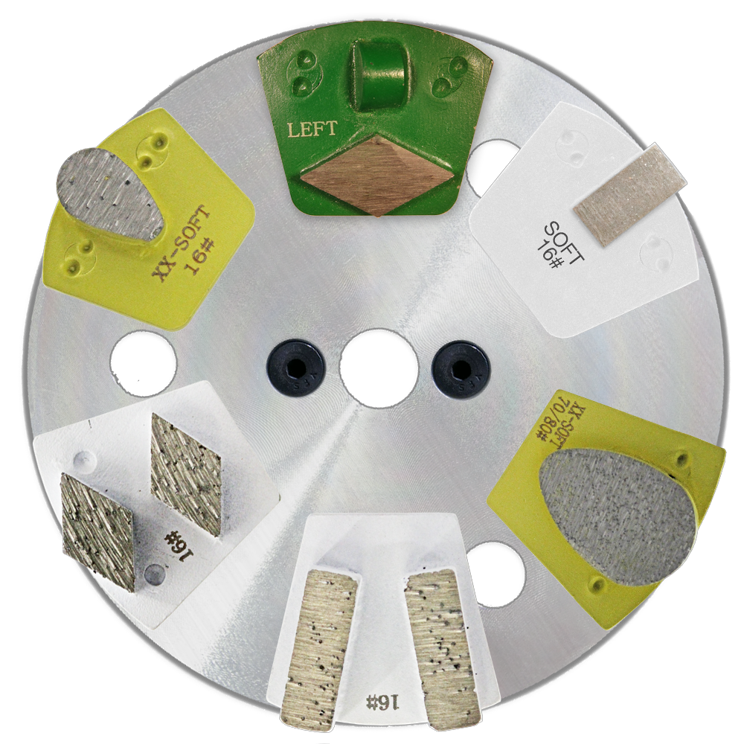 Examples of tooling options.WerkMasterNote the project you’re working on. While residential pours may have been done in one, larger commercial placements might have been done in different times of the day with different temperatures, sitting in a mix-truck longer, a slightly different formulation, etc. “What we recommend is in any commercial retail or industrial site, is to take a piece of paper and lay out a pencil drawing of what the floor plan looks like,” says Wilson. “Cut it into quadrants. If it's 5,000 sq. ft., cut it into four. You want to scratch at least two places in each of those quadrants.”

The Make-up of a Tooling

The rule of thumb: use a hard bond on soft concrete; use a soft bond on hard concrete; and a medium bond on a medium hardness.

“A metal bond diamond abrasive is a formulation of different types of metals,” explains Wilson. It is here where the difference comes in between soft-, medium-, or hard-bond tooling. The metal and diamond mix is then formed into various molds, shapes are specially designed for different uses.

The size of the diamonds suspended in the metal will direct how aggressive the tooling will be. This should be depicted by the tooling’s grit number. “The lower the number, the bigger the diamond,” says Wilson. The higher the grit, the smaller the diamond’s size in the diamond-to-metal bond make-up of the tool. While there are some natural diamonds used in tooling, they are typically man-made. The quality of these man-made diamonds can greatly effect price. Lower quality diamonds may wear quicker and may not cut the same.

While surface preparation can be going swimmingly at 1,000 sq. ft. an hour, this efficiency can significantly drop if you’ve mismatched the bond level. You’ll be burning through tooling quicker than necessary. Not to mention the increased labor-hour cost at the end of the day.

How to Determine an Abrasive’s True Cost