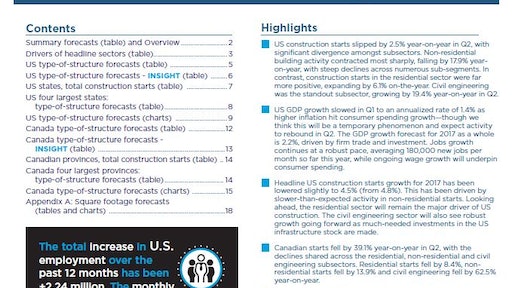 ConstructConnect, a North American provider of construction information and technology solutions, announced the release of its Q3 2017 Forecast Quarterly Report. The U.S. grand total construction starts growth projection for 2017 over 2016 in ConstructConnect’s Q3 report has been revised down slightly to +4.5% from +4.8%. 2018 remains about the same at +5.9% year over year (y/y). Earlier, it had been estimated at +6.0%.

“The outlook for U.S. construction starts, as calculated by ConstructConnect, has diminished slightly in the short term,” according to Chief Economist Alex Carrick. “Prospects for some private sector project initiations (e.g., in retail) have stalled, while high hopes for an early launch of a much-needed super-infrastructure program, to be sponsored, promoted and perhaps largely financed by the new administration in Washington, have been deflated.”

The forecast which combines ConstructConnect's proprietary data with macroeconomic factors and Oxford Economics econometric expertise, shows the type-of-structure sub-categories among non-residential building starts that will have banner years in 2017:

The 2017 forecast for nonresidential building starts was adjusted to -0.8% y/y, versus a flat (0.0%) performance that was expected in Q2’s forecast report. According to the forecast, non-residential building starts in 2018 will rebound to +3.3%, with private office buildings and industrial/manufacturing doing better with  less downward drag being exerted by retail and medical projects. The boom in hotel/motel work will begin to lose steam.

The forecast includes a few notable high points in the 2017 y/y engineering sub-categories:

The report states among major sub-sectors, residential construction’s 2017 y/y increase has been scaled down to +4.8% from +8.1%. The robust multifamily market of the last several years has been pulling back of late, as rental rates in many regions soared. Single-family starts also stalled, despite a need for substantial growth activity, since they declined so horrendously in the Great Recession. Also, new family formations, specifically among millennials, point to a tremendous potential that for the moment is not being realized.

The People, Plants and Paving Digital Conference, March 9-11, features a variety of educational sessions and a live question-and-answer portion with the instructors. Registration opens January 14.
December 10, 2020
Follow Us