Love's Asphalt honored for seal and stripe planning and execution 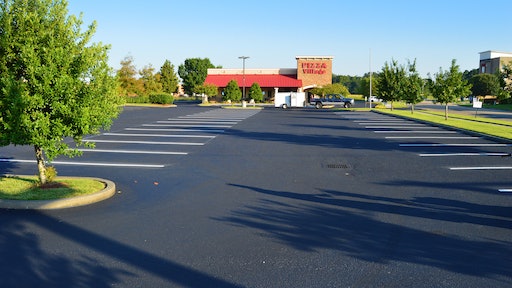 Contractors all work hard pursuing the new clients, and all contractors have the client that, for whatever reason, they can’t seem to land. But often contractors land that job that always got away – and they do a good job on a challenging project. That’s what happened with Love’s Asphalt Solutions, Lafayette, LA, and it’s why Love’s Asphalt Solutions receives Pavement’s Seal & Stripe: Small Job Award for 2020.

The award-winning job was at Pizza Village South, one of two premier pizza restaurants in Lafayette. Kristofer Love, owner, says the company has done work on the other pizza property but wasn’t able to break through to work for Pizza Village South until 2019.

“We worked the last two years to get the work and to get them to do something on their parking lot, and when we finally got the call, they wanted it done right away,” Love says.

The work they wanted done included more than 1,100 linear ft. of crack repair, 428 linear ft. of striping, striping of five handicap parking spaces and 65,360-sq.-ft. of sealcoating. When Love’s bid it they’d planned on doing the work over three days, but because of the timing of the job, Pizza Village South restricted when access to the restaurant could be closed.

“The major challenge was the job was right in the middle of the All-Star Softball season and the place was open seven days a week and couldn’t be closed down,” Love says. So, Love altered the plan to section off 14,000-sq.-ft each day, turning a three-day process into a five-night process. “At one point we had to split one day because we had to make sure people could get in through the front of the restaurant,” he says.

Third Time is the Charm

“The first job I overinvested and underdelivered,” he says. “I had the money, but I lost it because mentally I was too lazy to do the work I needed to do.” In his second business he underinvested and overdelivered. “I got gun shy and didn’t spend the money where I needed it,” he says.

Love says that what he learned from his two prior business efforts that he applies to Love’s Asphalt Solutions is to learn the numbers related to your business, learn to be the best salesman you can be, learn the supply and demand in the market… “And I learned I just didn’t know much about running a business,” he says.

But he’s figured some things out. When he started in this industry, he turned $600 into $1000 on the first job, paid his bills and reinvested the rest. He took that $1,000 and turned it into $6,000 and each time he completed a job, he paid his bills and took the remaining money and reinvested it in the company, buying the equipment he needed to grow including three rollers, a paver, an 800-gal. sealcoating trailer and a skid steer. He says his business is entirely self-funded except for $80,000 in bank loans.

Today Love’s Asphalt Solutions employs seven people, working out of an 8,000-sq-ft. warehouse with a 2,000-sq.-ft. office. The contractor is a full-service pavement contractor, doing everything from demolition and paving to striping. All work is done by the seven-person crew except for national accounts and the company has developed a network of contractors who enable the company to work in North Carolina, Georgia, Mississippi, Texas and Illinois in addition to Louisiana. Almost all Love’s Asphalt Solutions’ work is done on parking lots, private roads and driveways, with some day-work for public agencies patching roads.

The Pizza Village South job used a six-person crew (seven when Love was on site) with three people handling cleaning the pavement and cracksealing and three people sealcoating. One person handled the striping. Each night a new 14,000-sq.-ft. work zone was marked off and traffic was redirected to alternate routes and entrances. Love’s Asphalt crews used barricades and more than 20 cones with tape and string to keep people out of the work zone.

Love’s first step was to clean out a drainage area and install a concrete French drain so the lot would drain like it should. After that crews started behind the building, closed off the back-parking lot entrance, half of the drive-through and three-quarters of the back parking lot. “There was still some parking in the back and people could still access the drive-through, but they couldn’t do it from the back entrance,” Love says.

Each night a three-person crew cleaned the pavement using hydraulic brooms, power heads and blowers, then started cracksealing. The three-person sealcoating crew showed up a bit later to let the cracksealing crew get a head start. They then waited for the sealcoating to cure before going back to apply the second coat. They then waited again for the second coat to cure so they could go back and stripe it. Once they had the area striped, they were off the job until 10:00 the next night when they started the process all over again on another 14,000-sq.-ft. section.