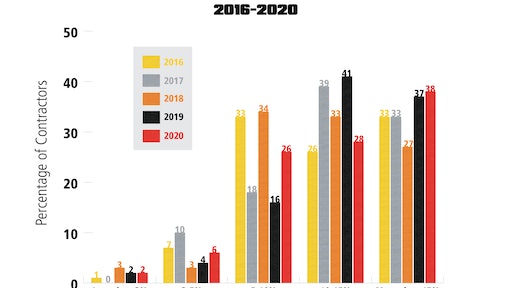 As noted in the Top Contractor overview, the huge increase reflects the welcome addition to some of the industry’s larger companies to the lists. Their addition, however, makes year-to-year sales volume comparisons difficult, as sales volume blew past historical benchmarks.

The remaining 49% of sales come from a broad mix of other pavement maintenance services:

As the chart on this page shows, contractor profit margins within the 2020 Paving 50 continue to fluctuate, with the most dramatic changes coming in the 5-10% and 10-15% ranges. Unfortunately, while those reporting in the largest range of profit margin remained steady, there was a significant decline in margins for more than a quarter of the Paving 50 contractors.

As the right-leaning chart shows, this reverses a trend of contractors reporting, for the most part, higher margins since at least 2016, though the 5-10% range shows more of an up-and-down movement than any of the other margin ranges.

Where the Paving 50 Work

Despite the addition of significantly larger companies to the list, these figures remain consistent with past years.