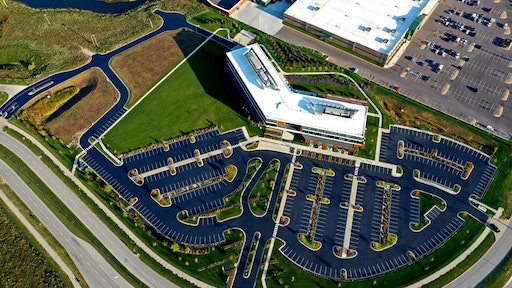 The end of the season is fast approaching, a key employee gets sick, and you have three days to complete the job, and it is no ordinary job. It requires cleaning, crack sealing, applying two coats of asphalt, and striping a 200,000 sq-ft parking lot, all the time keeping the client, Kansas City-based Dairy Farmers of America, operational.

“We received the project go-ahead in late fall, around Halloween, just when our season normally comes to end,” explained Miles Jaben, President of Seal-O-Matic Pavement Solutions in Olathe, KS. “Temperatures were unseasonably cool, but fortunately they still reached the mid-60s during the day and hovered around 50 degrees during the evening hours when crews did the layout and re-striping. Shorter daylight hours added to the challenges.

“To best accommodate the customer, we decided to do the project in three phases. Each phase was completed by 6:00 a.m. in time for me to re-locate the cones for the next section.”

The tight schedule kept the company’s seven employees “hitting on all cylinders,” said Jaben. They started early prepping, cleaning, and filling the cracks, followed by two applications of pavement sealer. The first application was done with a ride-on squeegee, the second was sprayed on again employing the ride-on machine. Adding a trailer and truck, both equipped with spray wands, helped speed up the job.

“We find we get better coverage using a squeegee for the first coat even though it is more time-consuming versus spraying on both layers,” Jaben added. “Wheel stops six to eight inches off the curb line created another challenge. Helping to save some time, team members took four-inch border brushes and worked in the sealer around wheel stops instead of having to remove and replace them.”

He noted for heavy-run areas, crews applied a third coat of sealer. For material, the company used a coal tar-based sealer with latex and dry-lock additives.

The first morning on the job, one of Seal-O-Matic Pavement Solutions’ key employees called in sick. A CDL driver and equipment operator, he would have acted as a supervisor on the job. Instead, he spent a couple weeks in the hospital and the company president donned his work boots to help out.

Another challenge, albeit not directly related this project, was a 2,000-gallon seal coat job on the backside of the parking lot. The job, which required even more precise planning, logistics, and execution, was completed simultaneously with the parking lot sealing and striping.

The ongoing Covid 19 pandemic caused a bit of a squeeze, too. As Jaben related, instead of the season progressing along as planned, business dropped off during the spring and early summer months but picked up later. “By the end of October, thanks to some big projects like the one for the Dairy Farmers of America, we had caught up, but not without our guys doing what they had to do to get this job and others completed in a timely fashion.

“We finished this job on time. In fact, it only took us 2 1/2 days to complete it, and a walk-though by the client indicated they were beyond pleased with the finished product our team delivered.”

In addition to thanking his entire crew for a job well done, Jaben has special recognition for two employees: “Estimator and Project Manager Skyler Stuke, responsible for obtaining the project through the competitive process, and Crew Foreman Michael Bringus, who kept this project rolling along despite unforeseen challenges that arose.”