How does boom placement and engine location affect machine function? 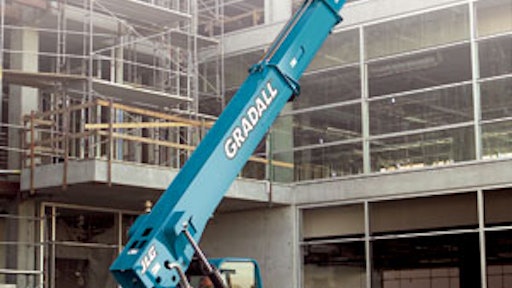 Some manufacturers design their telehandlers with the boom pivot high, while others mount it low. When it comes to engine position, there is also an assortment of locations, with some mounting it in the rear, others on the side and still others smack dab in the middle.

Why so many choices, and does it really make a difference?

Telehandler geometry has little if any affect on the actual mechanics of lifting. But it does affect visibility and how well the machine functions in certain applications and jobsite conditions.

"When telehandlers were first designed, the logical sequence of events was to put the engine inline like a car so all the drive shafts lined up," says Mike Reddick, sales director at Haulotte. "This positioning also provided counterweight so there was no need to add any additional steel, which reduced the overall weight of the machine."

In addition, mounting the engine in the rear provides relatively good accessibility to the engine, which, if necessary, can be removed fairly easily for major repairs or replacement.

With the engine pushed to the rear, it made sense to mount the boom high, Reddick continues. This added a foot or two to the lift height of the machine, and it provided clear visibility to the front and sides in all boom positions. Some telehandlers are still designed with this type of geometry, but over the years new configurations have been introduced that feature various combinations of high/low boom pivots and side/rear/mid-mounted engines.

The most widely accepted and most commonly used configuration in North America is a telehandler with a high boom pivot, says Ky Kuehling, vice president of telehandler products at JLG Industries. "The reason is because of improved visibility when carrying a load," he explains. "In a typical carry position with a large load on the forks, you can see under the boom when it's raised. Consider carrying a 4-ft.-high by 4-ft.-deep by 16-ft.-long bundle of lumber. With a high boom pivot machine, you are able to carry the load lower than you can with a low boom pivot machine and still be able to see under the boom."

The main drawback to this type of configuration is when it is designed in conjunction with a rear-mounted engine. "When the operator turns around, the engine is right in his line of sight," Reddick points out.

Some manufacturers have moved the engine to the center of the machine in order to eliminate this rear visibility issue and improve safety when the operator backs the machine. The drawback to a mid-mount configuration is engine accessibility, which can be restricted if a problem occurs when the boom is in the down position.

According to Kuehling, in the case of Gradall machines, a mid-mount engine provides for a longer wheelbase and more equal weight distribution. In unloaded positions, the machine is much closer to a 50/50 weight distribution, which helps when traversing rough terrain and working on steep slopes. It creates a more compact machine that can fit through overhead obstructions. A mid-mount engine also eliminates the need for a power transfer case to transfer power from the engine to the axle drivelines.

Ingersoll-Rand's center-mounted engine configuration allows for a low, A-frame boom mount, which is commonly referred to as a pick-and-place machine, says Joe Barney, product specialist at Ingersoll-Rand. With the operator's station positioned lower on the telehandler's frame, visibility to the right and right-rear is maintained without sacrificing ground clearance.

"Operators are often required to position building materials of excessive length that require the operator to raise the boom to a position where that person can gain visibility under the load," Barney says. "With our center-mounted engine and boom mounting design, the operator has the line of sight required to carry and place in strategic areas."

While Ingersoll-Rand's pick-and-place telehandler features a mid-mount engine, most low boom pivot machines are configured with side-mount engines. This is a classic European design that, while popular in the agricultural and landscape industries on this side of the ocean, has been somewhat slow in gaining acceptance in the construction industry.

Yet, there are advantages of a side-mount engine that you should consider when determining which design is right for your operation. Most notable is engine accessibility, which makes servicing components such as alternators, starter motors, batteries and fuel and engine oil filters much easier.

A machine with a side-mounted engine and low boom pivot also has a shorter head at the end of the boom for mounting attachments. Barney notes that this shortened boom nose "parapet" enhances ground-engaging performance and gives the machine the ability to function as a tool carrier for buckets, grapples, angle brooms, augers, etc.

With an operator's station positioned higher on the frame, the operator also maintains good line of sight over the boom with the boom at ground level. Plus, the cab is quieter.

From a manufacturer's perspective, a side-mount engine is more cost-efficient to manufacture. "Side-mount engine placement reduces assembly labor costs because the engine pod can be produced away from the assembly line and installed on the chassis at the same station as the cab," Reddick says. "The line moves much faster and more units can be completed per shift." This lower cost of production may ultimately sway market share in favor of the lower cost machines, he indicates.

However, like most configurations, a side-mount engine also has its disadvantages. The most cumbersome is visibility to the right-hand side of the machine, which can be an issue for certain trades such as masons who would carry their loads low.

"But steel erectors and framers tend to be a little more accepting of these machines because they can carry loads higher so they can see underneath the load," says Reddick. "And even for pick-and-carry applications, once an operator gets used to the configuration he appreciates the better rear visibility and full 360° visibility when traveling with no load with the forks positioned low."

Another drawback to side-mount engines is working on space-constrained jobsites. "This design results in the engine compartment protruding to the outside edge of the tires," notes Barney. "The telehandler could come in contact with low-lying objects around the jobsite if operators are not careful."

In the end, considering the pros and cons of boom and engine placement can help you select the right machine for your jobsite and applications. "Each configuration offers very distinctive designs," says Kuehling, "and distinct advantages and disadvantages."

Compared to a skid steer, JLG's SkyTrak 3013 can offer better reach into truck beds and trailers and over obstacles, in addition to better lift height for single story houses and dump trucks.
JLG Industries Inc.
February 12, 2020
Follow Us