Tributes have been paid to two access industry veterans after Dan Kaplan and Denis Ashworth both passed away recently. 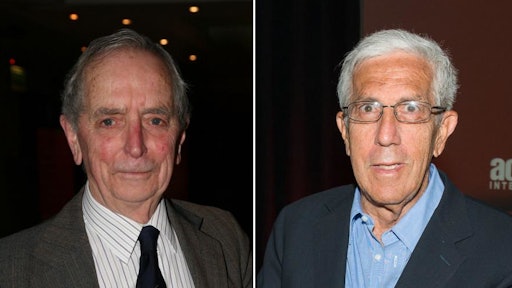 Two pioneers of the powered access rental industry have died. Dan Kaplan and Denis Ashworth were both previous recipients of the Lifetime Achievement Award presented by the International Powered Access Federation (IPAF) as part of previous years' International Awards for Powered Access (IAPAs).

Ashworth passed away on Feb. 28 at the age of 97. A qualified engineer by trade, he joined Simon Engineering in Dudley, West Midlands, United Kingdom, in 1951. Two years later, he was overseeing the first of Simon's aerial work platforms, and over the next few decades, the company became one of the world’s leading aerial lift manufacturers, mainly through acquisitions.

In 1995, he was retained by IPAF as a technical director to represent the association in the development of the new European standards for aerial work platforms and was instrumental in the EN280 standards, which were finally completed in 2004. He was made an MBE in the Queen’s Birthday Honors of 1974 and received a Lifetime Achievement IAPA in 2009.

Fellow access industry veteran, Kaplan, passed at the age of 78 and was often referred to as "the father of the modern rental industry." He was president of Hertz Equipment Rental Corporation, creating the first national rental company in the U.S. He worked as an industry consultant, helping rental companies establish themselves in new territories and develop new models of doing business. He was named a recipient of the Lifetime Achievement IAPA in 2018.

Peter Douglas, CEO of IPAF, said, “It’s very sad to lose two such titanic figures in the realm of powered access rental. Our sincerest condolences go out to their family, friends, and former colleagues. In their own ways, both were absolutely instrumental in helping create the powered access industry as we know it today; having been blessed with extraordinary vision and the conviction to see that vision through to fruition.

“Perhaps what was most remarkable is that both devoted so much time and passion to sharing their incredible knowledge and experience to the benefit of the wider industry – it is hard to think of more deserving recipients of Lifetime Achievement IAPAs. Both men leave a substantial legacy for pioneering positive change in our industry, and here at IPAF, we continue to strive to ensure their ethos lives on as we share safety knowledge and technical expertise for the benefit of all.”

Information provided by IPAF and edited by Alexis Brumm.