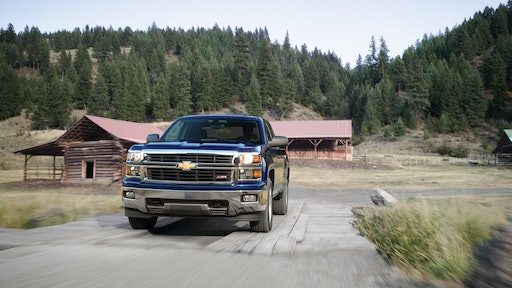 Chevrolet points out that Silverado's EcoTec3 and beats the EPA fuel-economy estimates for the 2013 Ford EcoBoost turbocharged V6 for both two-wheel-drive and 4x4 models.

The two-wheel-drive 2014 Silverado with the 5.3L EcoTec3, double cab and max towing package will have towing ratings of up to 11,500 lb., more than any light duty pickup currently on the market. Maximum available payload rating is 2,102 lb.

GM will add a standard 4.3-liter EcoTec3 V6 andan all-new 6.2-liter EcoTec3 V8 option to the 2014 Silverado and Sierra later this year. All the engine choices are mated to six-speed automatic transmissions.

The EcoTec3 engines provide the power of large displacement when needed, then switch to four-cylinder operation under lighter loads.

Other features that advance the 2014 Silverado and Sierra's capabilities include larger, stronger rear axles for V8 models and an updated suspension with two-stage multi-leaf rear springs.

FCP Video: Check Out the Features of the 2014 Silverado

PickupTrucks.com road tests the 2020 Ford F-250 with the new 7.3L V8 to see how it performs and measure fuel economy towing a load
Ford Motor Company
April 27, 2020
Follow Us