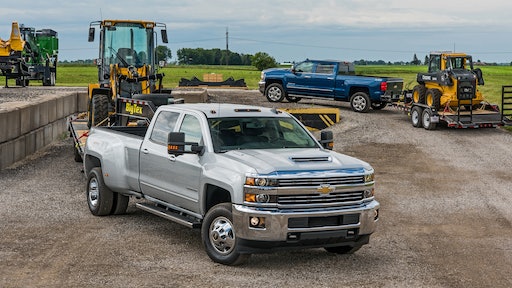 Chevrolet redesigned the 6.6L Duramax V8 turbodiesel offered in the 2017 Silverado HD for a 19% increase in maximum torque, generating an SAE-certified 445 hp and 910 lb.-ft. of torque. Chevrolet says the new Duramax is also quieter and smoother, with engine noise at idle reduced 38%. It shares only the bore and stroke dimensions of the current engine and incorporates a new GM-developed control system. The new Duramax offers 90% of peak torque from 1,550 rpm through 2,850 rpm. The 2017 Silverado HD with Duramax diesel will be easy to identify by the hood scoop, which drives cool, dry air into the engine for sustained performance and cooler engine temperatures during difficult conditions, such as trailering on steep grades. Integrated oil cooler with 50% greater capacity than the current engine’s ensures more consistent temperatures at higher engine loads. Microprocessor-controlled glow plugs are capable of automatic temperature compensation, assessing and adjusting the current to each glow plug for every use to deliver gas-engine-like starting performance in fewer than 3 seconds in temperatures as low as -20 degrees F without a block heater.

PickupTrucks.com road tests the 2020 Ford F-250 with the new 7.3L V8 to see how it performs and measure fuel economy towing a load
Ford Motor Company
April 27, 2020
Follow Us