Bridging the gap on Interstate 40

Twenty years after reconstructing a section of this road, Meadow Valley Contractors returns with today's technologies. 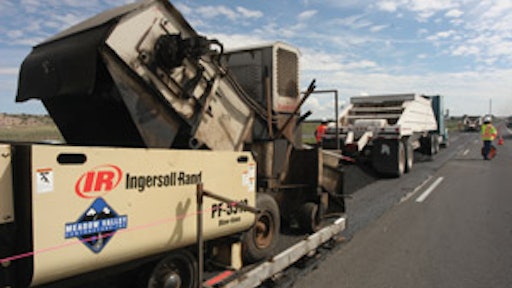 Cutting across the northern third of the state, Interstate 40 in Arizona is 360 miles long. In northeast Arizona, Interstate 40 is under a heavy load, serving between 20,750 to 27,600 vehicles per day, according to the Arizona Department of Transportation (ADOT). A high percentage of that traffic is trucks and tractor-trailers.

Under this strain, Interstate 40 has reached the point of needing repair. "We had a serious problem because of bad weather in the winter of 2004," says Ed Wilson, senior resident engineer with the ADOT Holbrook District. "The Department of Public Safety had to close sections of the road because there were so many potholes."

These sections of road are located between McCarroll and Querino, and Querino and Hawthorne. In the fall of 2005, the Querino to Hawthorne project was in design but was accelerated because of the urgent need to fix the road. Spot milling and filling was done on the McCarroll to Querino section of the road that had potholes to allow time to obtain funding and design the corrective project. The Querino to Hawthorne project covered 11 miles of eastbound and westbound traffic.

A second previous mill-and-fill project was a 12-mile stretch between Pinta and McCarroll. Meadow Valley Contractors Inc. has now been contracted by ADOT to mill and fill an 11.7-mile section between McCarroll and Querino, bridging the previous projects together.

Wilson says sections of roadway renovations are scheduled based on need, not years in service. These three sections happened to be in need of repair and connected to each other. "State materials personnel come to the Holbrook district, where these projects are located, every year and go out with the district engineer and drive all of our routes," says Wilson. "They prioritize what roads need to be repaired. There's only so much money allocated every year to pavement preservation and then roads are monitored to see where they can get the best use of that money."

A familiar project
Harry Camptell, project manager with Meadow Valley Contractors, is familiar with the section of Interstate 40 now under reconstruction. "About 20 years ago, I was on the crew that rebuilt this section of road," says Camptell.

Asphalt technology has changed dramatically since then. Camptell says the approach to creating an asphalt mix was much different. "In those days, there was a lot of experimenting with using sand and rounded particulates. We looked for sand and gravel sources. Today, we look for rock sources. The quest now is to find particulates that are angular, and to use less rounded sand particulates," says Camptell. "We know that the round aggregates in the mix didn't make asphalt pavements as stable as they should be. The mixes today are highly stable because of the angular rock."

When the road was last rebuilt, Superpave had not yet been invented. On the current project, when the old asphalt is milled out, it is replaced with a Superpave mix. The current rehabilitation of the road contains two phases. The first phase includes the mill and replacement of the deteriorated asphalt, replacement of 14,000 feet of guardrail and some concrete work on three bridges in each direction. The second phase involves the placement of a rubber friction course on the new asphalt. The second phase will be completed in the summer of 2007.

The crew from Meadow Valley Contractors begins each work day at 2 a.m., with milling operations continuing until 11 a.m. At 8 a.m., the paving crew starts their 9- or 10-hour shift. Asphalt is produced at an asphalt plant on site.

One of the challenges encountered on the project is working around the port of entry, located on the westbound side of the road. The port of entry includes a concrete slab that weighs trucks as they pass by on the roadway. Paving was done around these slabs, and the electronic sensors in the asphalt around the slab were replaced. "We had to replace a series of loop detectors and piezo sensors that are also used in the weighing and truck-handling process," says Wilson. "To accommodate this rehabilitation, port of entry activities were temporarily reduced and relocated to Holbrook."

This rubber friction course will be paved the entire width of the roadway, including the shoulders, because of the snow and ice that accumulate on the road in the winter. "If this course was paved only inside the lanes, the snowplow would catch the friction course and damage the edges when clearing the 10-foot and 4-foot shoulders. That's why we pave the friction course at full width, to keep everything level across the 38 feet and prevent the snowplow from damaging it," says Wilson.

The fact that the rubber friction course can stand up to the rigors of the snowplows and tractor-trailer traffic, laid in thicknesses of just half- or three-quarters of an inch, is a testament to its strength and durability. The rubber friction course is also versatile. It is used in lower elevations in Arizona: in metropolitan areas for sound reduction purposes as well as for friction.

Compaction is also different for rubber friction mixes. The ADOT spec does not allow the rubber friction course to be paved any wider than the width of the breakdown compactors provided, which usually requires a minimum of two breakdown compactors. Compactors work in static mode, since the material is in a thin lift. "The compactors don't work in tandem. They only go forward and never back up because there isn't a density requirement to this material. A second, finish compactor works to get all the marks out," says Camptell.

There is a smoothness bonus associated with the project. To Camptell, there is one thing that his crew does to ensure they achieve the bonus. "The number one thing in paving is consistency. The paving equipment runs consistently with the production of the asphalt. The paver is never stopped and runs at the same speed all day. The hot plant keeps a consistent speed of production," says Camptell.

The new roadway is expected to last 10 to 15 years. After that time, Wilson predicts a more extensive rebuild of the road will need to be undertaken. Now, 30 miles of Interstate 40 in northeast Arizona has been renewed due to the three recent ADOT projects. While 30 miles is a small percentage of the thousands of miles Interstate 40 covers, the rebuilding of the roadway will ensure more efficient transportation of people and goods across this important route.