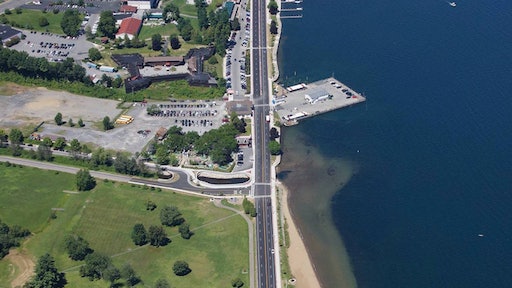 When a mile-long stretch of Warren County’s Beach Road needed to be reconstructed, it presented the opportunity for the county to implement innovative and protective measures to reduce the impacts of polluted stormwater runoff.

“This county reconstruction project is ultimately about maintaining this multi-modal corridor, while at the same time helping to protect Lake George,” says Tom Baird, P.E., Project Manager and Chief Engineer, on the project for design and engineering firm? Barton & Loguidice. “The project began with a plan to repair drainage issues and road conditions on the four-lane road that runs along the beach. The project, headed by Warren County Department of Public Works Superintendent Jeffery E. Tennyson, P.E., evolved over the last five years into an opportunity to improve the quality of the lake water by protecting it from the contaminants that run off the roadway,” he adds.

Protecting the pristine nature of the area as well as the water quality of the lake are of paramount importance to Warren County (the project owners), Lake George and the nearby New York State Department of Environmental Conservation (NYSDEC).

Baird and the project team spent several years studying the Beach Road location, the existing drainage challenges and the science behind the proposed porous pavement solution. The team developed specifications and created a unique design for Beach Road that accounted for its close proximity to Lake George, the existing high water table, and varying lake elevations during significant storm events (hurricanes and tropical storms) and seasonal cold temperatures.

The pluses of porous pavement

“Stormwater runoff is considered to be the No. 1 source of pollutants entering Lake George,” notes Baird. “By using porous asphalt pavement on Beach Road, the amount of salt and other chlorides from Beach Road will be reduced by up to 50%. Road spray and noise will also be reduced, and wet weather traction will be improved. The pores in the asphalt matrix provide an environment where automobile contaminants will  be biologically broken down by anaerobic microorganisms before entering the stone reservoir system below the pavement or the original ground underneath. The stormwater and contaminants are treated within the multiple layers of the system and the earth below.”

The porous pavement system for Beach Road was designed to capture and store 5 inches of rain in a 24-hour period, and then allow the stormwater to infiltrate the subgrade below.

“The underlying soil was considered to be weak because of the water table,” explains Baird. “The stone and asphalt thickness were based on AASHTO pavement design and used low CBR values that required the use of a thick layer of clean, No. 4 base stone 27 inches thick.”

“Porous pavement was laid over the stone in two separate lifts,” explains Michael Speshock, Superintendent with? Kubricky Construction, the contractor that provided a host of construction services for the job. Three inches of porous top course was laid over 6 inches of porous pavement base course, with the base course being laid in one 7.5-inch loose lift.

“There were temperature restrictions and roller patterns to take into consideration as the asphalt surface slowly cooled,” Speshock notes. “We performed four to six passes with a 10- to 13-ton roller (static) and one to three passes with a 3.4- to 5-ton roller to finish ... paying close attention to the design temperatures.”

A few interesting highlights of the project:

Porous pavement was not able to be used on the entire length of Beach Road due to the steep roadway grade on the east end, and at the intersection with Route 9 on the west end due to a high (30 inches from the surface) water table. In those areas and intersections where porous pavement was impractical, traditional asphalt was used in conjunction with vortex separators to treat runoff water.

Baird recommended a proactive approach for improved runoff quality that included a compact system that would meet the water quality volume and peak flow rate requirements, and provide separation of hydrocarbons, floatables and sediment. It would also need to store these contaminants without redispersal during the next storm. Following the county, federal and state bidding and procurement process, it was determined that the Downstream Defender vortex separator from Hydro International met the needs, performance criteria and objectives of the project.

The Downstream Defender is an advanced vortex separator designed to remove hydrocarbons, Total Suspended Solids and their associated pollutants such as metals from stormwater runoff. The Downstream Defender is a low head-loss separator, making it a good fit for this project due to the limited elevation in the drainage profile.
“Water enters the vortex separators at a lower elevation than it exits and this system worked very well with the minimal amount of grade difference in the roadway,” notes Baird.

Beach Road will undergo a three-year monitoring program to measure runoff volumes and quality of the discharge.

The roadway is not susceptible to frost heaving and potholes since there is no moisture trapped just below the surface to freeze and expand. “We also do not seal cracks like in conventional pavement,” says Baird. “Unlike conventional asphalt, we invite the water into this roadway. We don't try to keep it out.

“We anticipate enhanced life with this porous pavement,” concludes Baird. “Minor patchwork is just a fact of the typical life of a roadway, however the porous asphalt on Beach Road should hold up for more than 20 years — twice as long as traditional impervious pavement.”