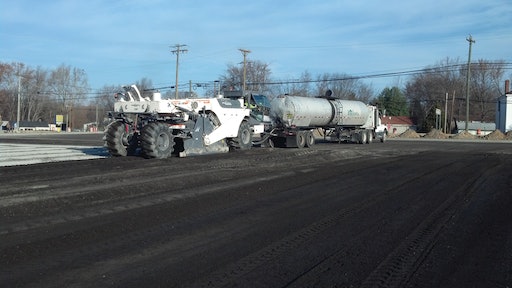 A reclaimer and emulsion tanker introduce emulsion to the RAP, placed on top of a cement-treated subgrade.

Slurry sealing and micro surfacing are increasingly becoming preventive maintenance options for asphalt pavement that is in sound condition. But Slurry Pavers Inc. has taken these technologies a step further by combining them with reclamation – on a parking lot – to construct some of the “greenest” black pavement around.

“Most of our work is on roads with airports increasingly becoming an important niche business,” says David Stowell, business development manager, soil stabilization and reclamation division of Slurry Pavers. “But preventive maintenance on parking lots also is growing.”

In 2012 Slurry Pavers moved into a new facility that had a 4-acre area the contractor planned on using for a parking lot for vehicles and equipment. At their previous location Slurry Pavers parking lot was half paved with hot mix asphalt and half with only aggregate, but the county required the new parking lot be paved. Slurry Pavers’ solution -- combining soil stabilization with Reclaimed Asphalt Pavement (RAP) and micro surfacing -- resulted in a savings of $250,000 over 6 inches of hot mix asphalt.

“At the time all four acres was covered with trees, so the first step was to remove all the trees. Once that was done we stabilized the soil throughout the whole parking lot 12 inches deep with cement at 4%,” he says. “We brought nothing in other than the cement. We used whatever material was there as the base.”

Stowell says the percentage of cement added to base material varies so Slurry Pavers sends soil samples to geo technologists, who run lab tests on the samples. He says the company has already established a rough baseline in Virginia where the range of cement to be added to stabilize the soil is between 3% and 5%, so that’s where the lab begins its tests.

“The goal is to have a compressive strength of 300 psi,” he says. “You want the pavement rigid but not too rigid that it results in reflective cracking. If there’s too much cement in the stabilized soil then it becomes too rigid, so we test it to determine the proper amount.”

Once the percentage of cement is determined a converted cement mixer with the drum removed and spreader bar installed is loaded with 10 tons of cement and the cement is spread at the required rate over the soil. A skirt 2 inches off the ground at the back of the machine around the spreader bar minimizes any dust.

So Slurry Pavers relies on a Wirtgen 750-hp reclaimer with an 8-foot head that can reach as deep as 21 inches in one pass. For their own parking lot Slurry Pavers set the depth at 12 inches because they were going to use a 12-ton pad foot roller that is capable of 97%-98% density at 12 inches, which was the goal. The reclaimer mixed the cement and water into the soil 12 inches deep as it blended in one pass.

“The equipment introduces the water to the soil as it blends it all together. It’s a very quick process,” Stowell says. “When working on asphalt, for example, you can complete one lane mile 24 feet wide in one day.”

Once the soil was stabilized and mixed a pad foot roller in vibratory mode was used to achieve the appropriate soil density. A steel drum roller in vibratory mode followed for an initial pass and then vibration was turned off for any finishing passes. Stowell says Slurry Pavers considers one trip with a roller “down and back” to be one pass, and their lot required three passes with the pad foot roller and three passes with the steel drum roller.

“We don’t operate the pad foot without the vibration because that’s the roller that’s getting the density,” he says. “We run one pass with vibration on the steel drum roller but after that we turn it off because you’re not getting additional density at that point. It’s just finishing the base so it’s ready to accept the hot mix.”

At this point Slurry Pavers has more than 4 acres of treated base on which to construct its parking lot. “The soil is stabilized so we have a platform to build the pavement on,” he says.

Next the Slurry Pavers brought in RAP, placing it 6 inches deep throughout the 4-acre parking lot. Dump trucks hauled the RAP from a job Slurry Pavers milled, and crews used a Caterpillar grader and a John Deere grader outfitted with a GPS system to spread the RAP. After spreading the RAP at the required depth and grade, they apply 1% cement with a truck mount spreader.  A reclaimer, then introduced asphalt emulsion to provide strength and to hold the material together, mixing the RAP, cement and emulsion together. (The cement will add initial strength and wick some of the water out of the emulsion for a faster cure time.)  With pad foot rollers, in vibratory mode, were used to achieve initial density, and once density was achieved a steel roller in static mode was used as a finish roller.

Once the 6 inches of RAP was ready Slurry Pavers used a Bergkamp micro surfacing unit to place a single micro surfacing treatment at a rate of 20 lbs./sq. yd. -- less than a half-inch thick.

“The job was done in December and it was very cool and we had to make sure the material would break,” Stowell says. “We had to let the material break a little before letting traffic on it. We placed micro surfacing on half the parking lot, then waited a day, and placed it in the other half of the parking lot.”

He says the job took less than two weeks, start to finish, and could have been done quicker in better weather. He says a conventional HMA job would have taken two weeks to pave three 2-inch lifts  “And that doesn’t include any of the subgrade issues you have to take care of prior to placing the base and the mix,” Stowell says.

“This is something we do as our business so it was a no brainer to do our new parking lot that way. It’s very cost effective and for all the same reasons we market it to other people, are the reasons we did it.”

“Talk about something that’s green!” Stowell says. “This job took something (RAP) that would have been removed and dumped into a landfill and used it in place of another more costly material. And it can hold equipment that weighs up to about 110,000 lbs. That’s something! I’m not sure you can get much heavier than that in this business.”

“We’ve brought some folks out there to look at it and it’s very difficult to tell our parking lot is not a traditional pavement. So we’ve marketed it to certain select clients and we’ve been successful doing that.

“We also wanted to let it sit for a while to see how well it held up and it’s holding up great. We know it’s great on roads where traffic is moving over it but we weren’t sure how it was going to perform on parking lots. Parking lots are a different game -- the equipment just sits here and we wanted to see how the pavement reacts and so far it’s held up fine.”

So the contractor is incorporating it into its sales efforts and is developing new charts and brochures to show and compare the value both in paving and in full-depth reclamation. He says that when focusing life cycle costs over 20-25 years the cost of reclamation is one-third to two-thirds the cost of what hot mix asphalt construction would be.

“Absolutely we will push the green or sustainable aspect of it,” Stowell says.

Reclaiming for the Competition

Slurry Pavers’ David Stowell says the contractor’s use of reclamation is attracting the attention of some competitors, who are hiring Slurry Pavers as a subcontractor. “We’re even having some of our competition recognize the value,” Stowell says. “Some hot mix guys have called us and asked ‘Can you fix this for us?’”

One recent example is a road paving job where the contractor patched $120,000 worth of pavement before constructing an overlay. The contractor went back a year later to construct the overlay and realized he’d have to spend another $120,000 to patch the pavement again before he could place the overlay.

“They called us and asked if we could fix it, and we did fix it,” Stowell says.

That road was constructed of 8 inches of stone with 5 inches of base asphalt on top. The contractor was hired to place another 2 inches of wearing surface on top of that. He says that to solve the problem Slurry Pavers went down 10 inches, reclaiming 5 inches of asphalt material and 5 inches of aggregate. “They needed that much depth because the soil is so bad,” he says.

“It’s costing them twice what it would have cost us to come in there one time and fix it all. Hot mix guys and developers are really starting to understand the value of what we do.”