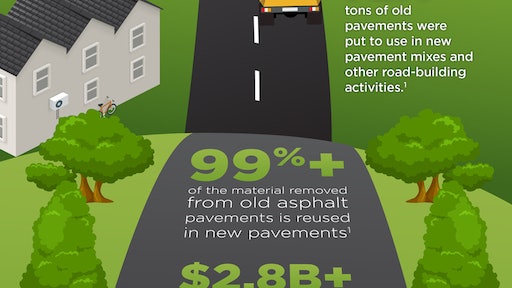 Nationwide, asphalt pavement mix producers continue to improve the sustainability profile of America’s roads through the incorporation of recycled materials and the use of energy-saving warm mix asphalt technologies.

According to the latest survey of asphalt mix producers conducted by the National Asphalt Pavement Association (NAPA) in partnership with the Federal Highway Administration (FHWA), more than 75 million tons of recycled materials — primarily asphalt pavement material reclaimed from old roads and parking lots and recycled asphalt roofing shingles — was put to use in new asphalt pavement mixtures during the 2014 construction season.

“Asphalt pavements are inherently sustainable, because when we pave a road, we are putting in place material that can later be harvested for reuse in new pavements,” states Michael Cote, 2015 NAPA Chairman and Executive Vice President & Chief Development Officer for The Lane Construction Corp. “No other material is recycled at a greater rate than asphalt pavements. Well over 99% of material removed during maintenance or repair activities ends up being put back to use in new pavements.”

The tons of asphalt pavement mixtures produced using recycled and reclaimed materials saw more than a 6% increase from 2013 to 2014, which is a significantly greater increase than the increase in total tons of asphalt mixture produced during the same time period.

Producers were also asked in the survey about ground tire rubber, steel and blast furnace slags, and other waste material repurposed into pavements. Although national estimates of usage were not calculated, survey respondents reported using nearly 1.3 million tons of these materials in 2014 in the production of more than 8 million tons of asphalt pavement mixes.

In addition to increased use of recycled materials, asphalt mix producers continue to increase the use of energy-saving warm mix asphalt technologies. In 2014, 113.8 million tons of warm mix asphalt was produced — about a third of all asphalt pavement mix production. This marks a greater than 577% increase in the use of warm mix since 2009, the first year the survey was conducted.

Warm mix asphalt is produced with a range of technologies that reduce the production and placement temperature of asphalt pavement mixtures. A variety of environmental, worker safety, and construction benefits have been realized through the adoption of warm-mix asphalt. In 2009, FHWA selected warm mix asphalt as one of the first technologies targeted for deployment through its Every Day Counts initiative.

“In 15 states, more than half of all asphalt pavement mixtures were produced as warm mix asphalt, and in six of them, more than 75% was produced as warm mix. This is an incredible rate of adoption for a technology introduced just a decade ago,” says NAPA President Mike Acott. “We are already seeing construction and performance benefits, as well as energy savings, with warm mix asphalt. We continue to focus research and engineering efforts on the use of recycled materials, warm mix, and other innovations to make our long-lasting, high performance asphalt pavements even more sustainable.”

The survey was conducted in mid-2015. Results from 228 companies with 1,185 plants in all 50 states, along with data from State Asphalt Pavement Associations for 35 states were used to compile the report. A copy of the full survey report, including a state-by-state breakdown of the data, is available at www.asphaltpavement.org/recycling.