The National Asphalt Pavement Association (NAPA) announced today that Norris Asphalt Paving Co. of Ottumwa, IA, is the winner of the 2015 Sheldon G. Hayes Award for excellence in construction of an asphalt pavement. The award, bestowed annually since 1971, recognizes the country’s highest quality highway pavements. Norris Asphalt Paving Co. and the Iowa Department of Transportation received their award today (Feb. 10) at a ceremony during the association’s 61st Annual Meeting in La Quinta, CA.

“The asphalt pavement industry is committed to building quality pavements that deliver high performance and drivability to the public,” said Michael Cote, NAPA 2015 Chairman. “All projects earning a Sheldon G. Hayes Award are measured against industry best practices, rated for smoothness a year after construction, and visually inspected to ensure the project lives up to our promise. I’m honored to say that, in earning a 2015 Sheldon G. Hayes Award, Norris Asphalt Paving Co. has exceeded these rigorous standards.”

The award was earned for Norris Asphalt’s work on U.S. 34 in Montgomery and Adams counties. The 15-mile project dealt with variable widths, numerous turning and climbing lanes, and long material hauls. The project also included widening the road, including an almost 2-mile section of roadway that went from two lanes to four lanes and then back down to two lanes. In addition, another Iowa highway, U.S. 71, intersected the middle of the four-lane portion of the project.

“I don’t think there was a flat spot on this project,” said Brady Meldrem, President of Norris Asphalt. “I think there were passing lanes going up every hill.”

The U.S. 34 project used more than 79,000 tons of asphalt. To start, a half inch to 1 inch of the road surface was milled off the east side of the roadway, said Bob Mobley, Norris Asphalt’s Paving Superintendent.

The four-lane section was 1.8 miles long and sitting in the middle of this section was U.S. 71, and its accompanying interchange and ramps. “When you talk about the varying widths, that’s extremely difficult to do,” said Meldrem. “It’s not just put the paver down and measure. The lanes go from side to side, and Bob Mobley and the whole team did a great job of getting it all laid down.”

The road’s owner, the Iowa Department of Transportation, said the company’s experienced personnel were a valuable asset to this project and its ability to juggle the many variables.

“The U.S. 34 project was fairly complex in the fact that it contained nine climbing lanes, five bridges to transition into, two major intersections with turn lanes and variable widths, as well as transitions into and out of a 2-mile long, four-lane section with a major interchange,” said Scott Nixon, Iowa DOT’s Resident Construction Engineer.

Dan Roberts, Norris Asphalt’s Project Manager, said that reclaimed asphalt pavement (RAP) was used in all three of the project’s mixes. “The RAP came from the project as we milled a little over 13 miles,” said Roberts. “The base mix used 21 percent RAP, the intermediate mix used 20 percent RAP, and the surfaced mix used 17 percent RAP.” Putting asphalt pavement material removed from old pavements back into new pavement mixes is a common practice, but the U.S. 34 project was notable for the amount of recycled content in each layer of the pavement structure.

Ray Brown, National Center for Asphalt Technology (NCAT) Emeritus Director and the independent consultant who inspected each project site, said the pavement performed well in every single category to win the top award. “At the time of inspection, the completed surface was very smooth and dense without any cracking, rutting, raveling, or segregation,” Brown said.

The Sheldon G. Hayes Award winner and finalists are determined through a two-year evaluation process. Any highway pavement project using more than 50,000 tons of asphalt is eligible for consideration. Initially, the project must win a Quality in Construction (QIC) Award, which is determined by numerical scores given by pavement engineers at NCAT on the basis of how well the contractor met specifications and achieved density on the finished pavement. All the pavements that meet a benchmark figure earn the QIC Award.

The year after a project wins a QIC Award, it is eligible for consideration for the Sheldon G. Hayes Award. The top-ranked projects from each year are tested for smoothness, and then visually inspected by an independent pavement consultant with many years of experience in the industry. This year, the evaluators praised all the candidates for their high-quality construction practices, which resulted in smooth, safe, and durable pavements.

The award is named for Sheldon G. Hayes, a founder of NAPA and the association’s first chairman. Hayes spent his entire career striving for better construction techniques and improvements in the quality of asphalt pavements. 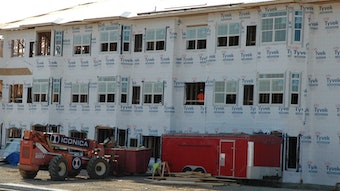 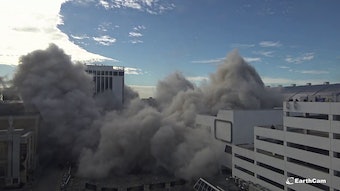