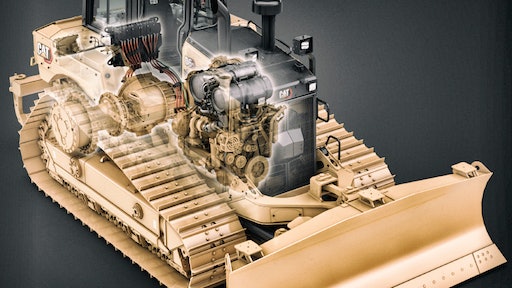 Still getting used to the idea of powershift automatic shifting on your heavy equipment? Now, on some machines, you’ve got another choice: electric drive. What exactly is different? Why would you pick one option versus the other? And what makes either better than a traditional powershift transmission? You’re not the only one asking these questions. We’ve got some answers.

The electric motor can operate at all ground speeds, ensuring the machine is always operating at the most efficient point possible. The drivetrain can vary torque delivery to the final drives with minimal change to engine speed. Both of these factors help reduce fuel consumption and can extend engine life. Another benefit: Electric drive has 90% fewer moving parts than a traditional powershift transmission for simpler, less expensive maintenance.

The easiest way to see the differences is to look at one machine — the Cat D6 Dozer — that’s available with either electric drive or auto shift, then compare it to the previous powershift model (the D6T).

The electric drive next generation Cat D6 XE requires a bit more investment up front, but fuel savings can reach up to 35% versus the three-speed D6T. There are no gears to shift — instead, power to the ground is continuously optimized for forward momentum throughout the push. You also get faster cycle times, thanks to a combination of constant power to the ground, continuous push and greater maneuverability. Work the D6 XE hard, and you could recoup the cost difference in two years or less.

With a four-speed, fully automatic transmission, the D6 is priced lower than the XE model but still delivers fuel savings — up to 20% over the D6T. Fully automatic shifting with an added transmission gear reduces the momentary hesitation felt when a traditional machine shifts, so you maintain more momentum and drawbar power throughout the entire push. And, because auto shift works up and down the entire working range, power to the ground and fuel consumption are optimized for a greater percentage of the time.

Choosing between electric drive and auto shift comes down to your application and goals. Both are easy to operate — just set the ground speed and let the dozer automatically optimize based on load for the greatest productivity and fuel efficiency. That said, if your job requires the highest levels of both productivity AND fuel efficiency, it pays to consider the added benefits of electric drive.

Want to learn more about the differences and benefits? Take a closer look at the D6 XE and D6.

Planning for a Healthy Bottom Line Before, During and After the Job

Poor planning is often the source of construction projects running overbudget or behind schedule; proper project management can help keep you on track and profitable
Caterpillar - Cat
October 1, 2019

Too many workers turn to drugs and alcohol to deal with the pain of injuries, which are all too common in construction
Caterpillar - Cat
August 28, 2019

17% is the average bid-winning percentage for general construction contractors. Here are six things you can do to beat the odds
Caterpillar - Cat
August 28, 2019

Follow these five proactive tips and you’ll be well on your way to reducing repair costs
Caterpillar - Cat
July 2, 2019

Hot, Humid Weather is Coming. Are Your Team and Fleet Ready?

Gearing up to work long hours in the sun, it pays to invest in heat-specific safety training and plans to adapt to the hottest temperatures
Caterpillar - Cat
June 12, 2019

Technical skills can be taught; the intangibles that make a great employee often cannot
Caterpillar - Cat
May 31, 2019

Grade technology can deliver big benefits before your operators take a seat at the controls, and it’s quickly reaching the point where your bids may not be competitive without it
Caterpillar - Cat
May 13, 2019

Trade estimates suggest 15% to 20% of trucks are loaded at incorrect weights and most on-highway loads run 5% to 8% under maximum legal gross vehicle weight
Caterpillar - Cat
May 13, 2019

Bidding Struggles? It Might Be Time to Go Online

Everyone struggles with bidding confidence. Luckily, there are good tools online to help you find projects and target those that are a good fit for your business
Caterpillar - Cat
April 24, 2019

Are These Mistakes Affecting Your Bid-Win Ratio?

Five common errors that can cause your bids to be rejected and your company to miss out on good, profitable jobs
Caterpillar - Cat
April 24, 2019

To get maximum returns from your investment in grade automation, your dozer needs one very simple piece of hardware
Sam Meeker
December 10, 2018

7 Things You May Not Know About Hypothermia

Temperatures don’t even have to be below freezing to get hypothermia – wind and rain can reduce body temperature below 95 degrees F
Lonnie Fritz
November 30, 2018

5 Ways Skilled Operators Can Save You Money

There Is One Upside to the Skilled Operator Shortage

Does Your Equipment Set You Apart?

How important is technology to prospective operators anyway?
October 8, 2018