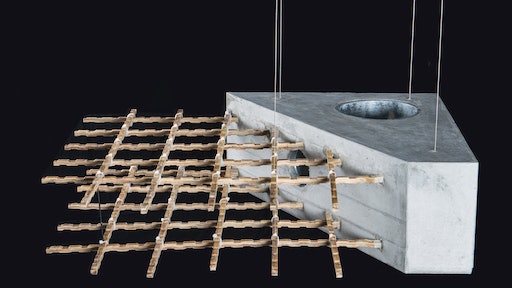 Steel-reinforced concrete is the most common building material in the world, and developing countries use close to 90% of the cement and 80% of the steel consumed by the global construction sector. However, very few developing countries have the ability or resources to produce their own steel or cement. Out of 54 African nations, for instance, only two are producing steel. The other 52 countries all compete in the global marketplace for this ever-more-expensive, seemingly irreplaceable material.

But according to Future Cities Laboratories, steel is not irreplaceable. There’s a material alternative that grows in the tropical zone of our planet, an area that coincides closely with the developing world: bamboo. Bamboo belongs to the botanical family of grasses and is extremely resistant to tensile stress and is therefore one of nature’s most versatile products. This has to do with the way the grass evolved, adapting to natural forces like wind. In contrast to wood, the bamboo culm or haulm, which are botanical terms for the stem of a grass, is thin and hollow. This allows it to move with the wind, unlike a tree, which tries to simply withstand any natural forces it is exposed to. This adaptation for flexible movement required nature to come up with a very light but tension-resistant fiber in the bamboo culm which is able to bend in extreme ways without breaking. In its ability to withstand tensile forces, bamboo is superior to timber and even to reinforcement steel.

Bamboo has been used in construction for many years. Given its outstanding tensile properties, replacing steel reinforcement in reinforced structural concrete with bamboo is of high interest to many architects who are of a sustainable mindset.

However, the natural form of bamboo poses many problems when it is used as reinforcement in concrete. Bamboo, if left untreated, can swell with water and rot. Shrinkage and long-term durability are some of the drawbacks of using natural bamboo in structural concrete, which result in its segregation from concrete matrix. As a result, it hasn’t been used to reinforce concrete with much success—at least not until now

To overcome those issues, a new bamboo composite material has been developed at the Chair of Architecture and Construction Professor Dirk E. Hebel, that has a high tensile capacity and performs well in a concrete matrix in the long-term. The material is strong and highly versatile and could serve as an effective replacement for steel in reinforced concrete.

Instead of using bamboo in its natural tubular state as is traditionally the case, Hebel’s method first extracts the plant’s natural fibres before combining them with an organic resin.This composite material, termed BambooTECH, is highly versatile and lends itself to tooling and manipulation in a manner similar timber once it’s pressed into shape. When fashioned into thin rods, the composite material can be used as the reinforcing structural matrix for concrete in the same way as steel.

Speaking at the World Architecture Festival in Singapore last year, Hebel said the use of bamboo in lieu of steel had the potential to “revolutionize our building industry and finally provide an alternative to the monopoly of reinforced concrete.

"The material’s tensile strength aroused our interest as architects and engineers and inspired us to investigate the possibility of extracting the fiber from the natural bamboo, transforming it into a manageable industrial product, and introducing it as a viable building material, an alternative to steel and timber. Bamboo composite material can be produced in any of the familiar shapes and forms in which steel and timber are produced. Like them, the material can be used to build wall structures for houses or any other buildings. More interestingly, it can be used for specific applications that best take advantage of the material’s tensile strength, such as reinforcement systems in concrete or beams for ceilings and roof structures."

Bamboo possesses some of the same sustainability benefits as timber when employed as a building material, because as a form of plant matter, it’s a completely renewable resource that can be rapidly replenished by means of natural processes. It grows much faster than wood, is usually available in great quantities, and is easy to obtain. It is also known for its unrivalled capacity to capture carbon and could therefore play an important role in reducing carbon emissions worldwide – another advantage for developing nations in light of the trade in carbon emission certificates. Simply from an economic perspective, most developing nations should be interested in the material. It could strengthen local value chains, bring jobs and trade to those countries, and lower their dependency on international markets.

It has its own advantages compared to timber as well, given that it’s harvested from grass plants as opposed to trees. Unlike timber, the harvesting of bamboo does not destroy the plant that produced it, because the root system is left unaffected in the soil.

This means that bamboo does not need to be replanted the way trees are after harvesting, as the root system remains in the soil where it continues to produce new shoots.

The Future Cities Laboratory is also investigating ways to make construction materials from waste and sand.

The Athletic Side of Sustainable Construction

Are Green Retrofits the Future of Construction?

Is it Possible to Grow Sustainable Building Insulation?

While there can be greater risks attributed to sustainable construction projects, there's also huge opportunities for contractors who hold experience with this growing market trend. Opportunities that equaled $145 billion in 2015 alone.
Jessica Lombardo
October 29, 2015

We celebrate Earth Day with the launch of a new blog series which highlights equipment that can help construction contractors reduce their carbon footprint and improve their bottom line.
Jessica Lombardo
April 22, 2015
Sustainable Snippets

What are the next sustainable “shades” of green?

"Green" is all around us

Going green can help contractors avoid being in the red