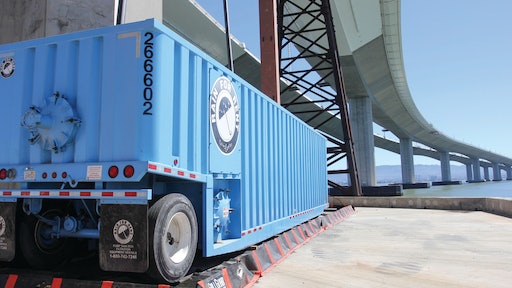 Hampered by delays since the project began in 2002, the San Francisco-Oakland Bay Bridge (the largest self-anchored suspension bridge in the world) is undergoing a seismic retrofit to bring it in line with transportation safety standards after it suffered significant damage in the 1989 Loma Prieta earthquake.

In preparation for a complex bolt repair that required drilling into the concrete structure, the bridge contractor (American Bridge/Fluor - a joint venture between American Bridge Company and Fluor Corporation) needed to find a way to safely disperse the water necessary for cooling during the drilling process. Unable to release this water into the Bay because of its high pH levels and sediment content, the contractor needed a liquid handling solution to capture and transport the water from this confined and uniquely positioned jobsite more than 160 feet in the air. With the clock ticking on a proposed late 2013 opening date, the job had to be planned and completed quickly.

An urgent call from environmental and demolition contractor Eco Bay Services, Inc. brought Rain for Rent’s (rainforrent.com) local engineering team to the site to assess the job requirements. Planning took only about 1.5 weeks to design the solution, prepare estimates and secure the necessary signatures on the contractual documents. The drilling project itself took about eight weeks.

“We were told there was zero margin for error,” recalls Kyle Van Fleet, Rain for Rent Project Engineer. “Every drop of water, concrete slurry and debris had to be captured, contained and diverted off the bridge for transportation,” he explains. “Once the drilling started, stopping was not an option. Failure wasn’t an option. We had to design everything with enough capacity and enough redundancy to work right the first time.”

After constructing a steel gutter to capture the water under the drilling site, Rain for Rent ran a vertical pipe down 160 feet to direct the water into two tanks placed on the floating pier end caps below the bridge. An additional two tanks were placed on land in the harbor area.

For additional protection against leakage, Spillguards – one-piece temporary containment berms – were installed under the tanks. Upon project completion, the water was pumped from the tanks on the bridge to a set of tanks on a barge for transportation to the Port of Oakland for treatment and sanitary disposal.

“Not only did we deliver a watertight solution in a tight jobsite configuration, but we also enabled the contractor to pass the scrutiny of every possible regulatory hurdle,” says Tony De Bellis, Branch Manager, Rain for Rent.

“The actual application of this project wasn’t different from what we do every day,” concludes Van Fleet. “However, the location – in the middle of the Bay – was unusual. The coordination of all involved, American Bridge/Fluor, Eco Bay Services and the Rain for Rent  design and field teams, made this project a success in the tight timeframe and unique working conditions.”

Getting Misty By the Bay