Overall, confidence in the equipment finance market fell to a historic low in April of 22.3, decreasing from the previous low of 46.0 in the March index. 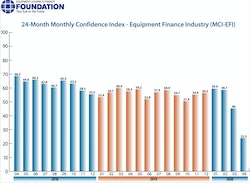 The Equipment Leasing & Finance Foundation (the Foundation) releases the April 2020 Monthly Confidence Index for the Equipment Finance Industry (MCI-EFI). Designed to collect leadership data, the index reports a qualitative assessment of both the prevailing business conditions and expectations for the future as reported by key executives from the $900 billion equipment finance sector. Overall, confidence in the equipment finance market fell to a historic low in April of 22.3, decreasing from the previous low of 46.0 in the March index.

When asked about the outlook for the future, MCI-EFI survey respondent Michael DiCecco, Executive Vice President, Huntington Asset Finance, said, “During these uncertain times, I remain optimistic about the future of the equipment leasing and finance industry. While production is likely to soften in the short term, in many ways we have a great opportunity to affirm our value to our existing clients and demonstrate our value to new ones. It’s an important time to stay close to our clients.”

In terms of demand for leases and loans to fund capital expenditures:

None of the respondents expect more access to capital to fund equipment acquisitions over the next four months, a decrease from 14.8% in March.

When asked, 6.9% of the executives report they expect to hire more employees over the next four months, a decrease from 29.6% in March.

In April, 17.2% of respondents indicate they believe their company will increase spending on business development activities during the next six months, a decrease from 22.2% last month.