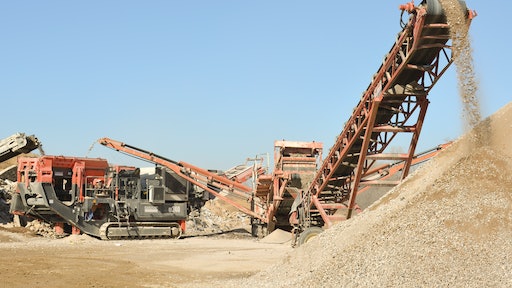 The Sandvik QI240 is a 43-ton crusher that moves on 20-inch-wide tracks and can be transported by trailer.

Concrete products are manufactured to last a long time. So why discard the sturdy material just because the useful life of a concrete building or highway has ended?

The McAfees own and operate DT Specialized Services and manage demolition projects across the southern Midwestern United States. Five years ago, while tearing down a concrete structure that created an unusually large pile of refuse material, the McAfee’s became uncomfortable with hauling it all away to a landfill.

“We realized the sheer volume of concrete debris we created was going to be wasted, rather than recycled. That was the cornerstone of our decision to start the crushing business,” says Terry McAfee. The result is an affiliated company called ReRock Materials Inc., a recycling facility that creates recycled concrete and aggregate products.

Though ReRock is a business and is operated as one, the McAfee’s are committed to recycling as an environmental best practice, even though they live in a region where natural aggregate is in ample supply and landfill fees are low. “We want to recycle a large amount of concrete per project,” David McAfee confirms. “But we are not doing this because this is a windfall. We are doing it as a commitment to the recycling industry.”

From novice to pro

Experienced as David McAfee was in construction and demolition management in 2008, he was a novice recycler. He saw a rock crusher at ConExpo and went shopping for more information. After visiting recycling operations and looking over different brands of crushers, he finally bought a mobile jaw crusher and went to work.

Almost as important was his meeting with Brian Costello, co-founder and sales director of? Crushing Tigers. The company with the vivid name supplies mobile crusher and screen machines and spare parts in the Oklahoma and Arkansas markets. Costello sold McAfee an Extec S-3 screen, currently known as the Sandvik QA140, a tracked unit with a 10-foot by 5-foot screening area and double-deck screen. The crusher exceeded his expectations. When McAfee discovered that along with a reliable product, Costello was knowledgeable and reliable, he began to look to Costello for other industry insight.

He looked to the right person. When Costello and managing director Pat Doab started Crushing Tigers, they did so with the intention of guiding customers toward more efficient crushing and screening operations. In looking critically at DT, the men soon concluded that more efficiency for DT operations would require bringing in a secondary crusher.

The challenge was that David McAfee was not in the market for another crusher. To convince McAfee, the team demonstrated a Sandvik QI240 PriSec mobile impact crusher. The demonstration and subsequent analysis showed that while the overhead of a second machine had been added to the crushing process, the cost per ton of crushed concrete decreased. Costello and Doab repeatedly crunched the numbers with David McAfee until there was no question in his mind.

The result: ReRock Materials increased production way out of proportion to the increase in production cost. “Before adding the Sandvik crusher, we were normally producing 30 to 50 tons of sellable product an hour,” David McAfee says. “Now, if we are not doing 200 tons an hour, there is something wrong.

The massive increase in production makes all the numbers look good. The addition of the Sandvik QI240 reduced the cost per ton to a third of its original value. Furthermore, with the QI240’s four-bar rotor turning irregular chunks into uniform nuggets, reliance on the original jaw crusher was lessened, extending its working life.

At DT Technologies, the QI240 is used primarily, but not exclusively, as a secondary crusher. The only reason the McAfee’s can use the machine in both capacities is because the QI240 is the only impact crusher on the market capable of operating in either a primary or secondary position. This unmatched versatility comes from the patented design of its impactor box.

Besides operating efficiency, what sold McAfee on the QI240 was its portability. The 43-ton crusher moves on 20-inch-wide tracks and can be transported by trailer. The compact machine is just 8 feet wide and 46 feet long — an easy permit to get for companies wanting to operate the crusher at more than one location.

“My bigger motivation in purchasing the QI240, aside from cost savings, was to have a machine I could throw on a trailer, run 500 tons of material through in a day, and then move it off site,” David says. “The mobility of the machine is key, as well as its quick setup.”

These two attributes of the QI240 — the efficiency of the machine’s crushing process and its portability — have led to additional business at DT Specialized Services. First, more rock is being processed by the company for selling and stockpiling against future sales. Second, when work is slow at a demolition site, the QI240 is trailered elsewhere for custom crushing.

Such trusting relationships are precisely what Costello and Doab want to forge with their customers. “The key is working together as a partnership,” says Doab. “The relationship is important for sustainability and the trust creates opportunities for everyone.”

Costello adds that selling and servicing good machinery is gratifying, but becoming trusted partners with customers tops all. “I respect what machines can do, but it is working with people that makes my day,” he concludes.

ReRock Materials, Inc. understands that the bottom line of any site clearance or demolition project is what makes the difference. DT Specialized Services and ReRock consolidates, cleans and palletizes thousands of masonry units from old buildings for re-use in new construction. Examples of products that are extracted for reuse include:

Stewards of the Environment?

Sandvik to Acquire Chinese Supplier of Crushing and Screening Equipment