Using the past as a teacher, Vernox Labs helps contractors mine unstructured data to reduce costs on projects. 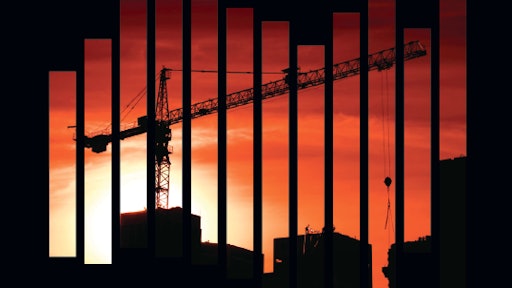 Data is everywhere. When it comes to the construction industry, companies are collecting data from your equipment, your phone, your project designs, building materials and more. But what is the end goal for all this information?

“Every construction project is in its own silo. Every new project is like its own startup. However, similar problems keep resurfacing,” says Vinayak Nagpal, co-founder of Vernox Labs.

What Vernox Labs is hoping to do is eliminate some of the guesswork that comes with a new project by using reams of unstructured data from previous projects to help general contractors, designers and project managers’ figure out how to sidestep common building errors.

“What are the things you haven’t accounted for? Maybe there’s a certain curtain wall system that has been constructed 1,000 times,” says Mike Savaiano, Vernox’s other co-founder. “What has come up in the past that you can learn from? That’s the data we want to compile and share”

Savaiano explained that in a construction process, what will typically happen is that a developer will want to build something, they go to an architect, who will create a design, then a contractor is hired to spec out those designs. That’s where all of this back and forth happens between an architect and builder.

Vernox is applying artificial intelligence techniques to the pile of e-mails, Word documents and Excel files that are traded back and forth between contractors and designers as a residential or commercial project is built. From that data, Vernox Labs produces a predictive checklist or automated design review that project managers can run through with a new proposal.

From there, contractors can access a platform that acts as a Google-like search engine that can be used for all project team members. If sub-contractors or construction workers have questions about specific components or materials, they can get that information instantaneously.

Just where did this desire to compile data for the construction industry come from though and why?

“Vinayak and I have seen how valuable data can be for informing and guiding decision making in other industries that we have worked in, ” Savaiano says, “But neither of us have a direct background in construction. I worked in sales and business development roles for a real estate developer and then an enterprise software company prior to starting Vernox. Vinayak was most recently focused on software and hardware development for wireless systems (cellular networks).

However, in early 2014 Nagpal and Savaiano got their toes into the construction industry due to an early product prototype they had developed.

“The product prototype ended up not being needed by those in construction, but we became exposed to an industry that really fascinated both of us,” Savaiano says. “With this fascination in hand we decided to learn as much as we could and, based on that learning, see what technology solutions we could develop for the industry.”

For the next year and a half, the team developed a few productivity apps for large-scale construction project teams. The apps helped them get in the door with the Engineering News-Record (ENR) Top 100 General Contractors.

“With the Top 100, we really started to understand how contractors operate and think about every phase of a construction project, from pursuit through closeout,” Savaiano says. “Through our close working relationships with a few general contractors, we started seeing that there is lots of data being generated and collected on every construction project, but very little is being done with it.”

In construction they saw a tendency to lean on tacit knowledge of project team members. While leaning on tacit knowledge can work well when you have a very experienced project team and time is taken to get everyone in the same room and plan out in detail key aspects of a project, it’s not always an option; especially on larger projects.

“To exacerbate this, we’re seeing an industry where a large number of the most senior, and therefore knowledgeable, project team members are hitting retirement age,” Savaiano says. “How is their knowledge and understanding of best practices going to trickle down to those just entering the workforce in construction?”

In the long-term, Vernox hopes to help contractors improve project outcomes for all stakeholders of large scale construction projects: owners, architects, engineers, general contractors, trades and anyone else involved on a project.

“Today, we’re focused on helping general contractors learn from past projects and apply those learnings to new or upcoming projects,” Savaiano says. “Our near-term goals are to help general contractors become more efficient, with the goal of helping them to improve upon project delivery timelines, budgets and quality goals.  We think that by focusing on these deliverables will ultimately help with improving general contractor margins on projects.”

“There is a prolific amount of data that has been collected but it currently exists in formats and systems that make it largely unusable for the data owner (general contractor),” Savaiano says. “One of the things that we do at Vernox is take the data and put it into a platform that actually lets the general contractor be able to start leveraging the information that exists.”

Savaiano says this creates two main ways in which Vernox is able to help a general contractor leverage their data to reduce costs and time on a project:

1. Building component and material feedback: Based on building components or material being called for on a new project, Vernox is able to identify if there have been specific issues on past projects and preemptively give feedback to a project team in the design review or pre-construction phase of a project.

2. Creating a searchable question and answer platform for project team members : If an issue comes up on project, it is often something that has been dealt with before. Someone from the project team can search for what has been done in the past or what is a possible solution for the specific issue. Alternatively, a project team member may want to find a solution for an issue before it comes up. Often times this can be around how a contractor can cut schedule or time out of a build if specific issues arise?

"Vernox is really giving a project team member the ability to search for answers to questions based on past projects as it is highly likely that an issue has come up before," Saviano says. “Buildings are so complex now. The designs are more complex. The materials are more complex. The internal systems are more complex, but nothing has been done to help to the delivery of the project. That hasn’t changed in a hundred years. That’s what we’re focused on.”

So far Savaiano says the feedback has been positive for the Vernox program. They are working with The ENR Top 400 and have already given those large contractors access to this data. Savaiano says they are currently keeping it for audit and accounting purposes on projects. Think requests for information (RFI), change orders (CO), budgets, schedules, etc.

“I believe that we are only scratching the surface of how valuable this data and the insight that it can provide for general contractors,” Savaiano says. “We’re hearing from general contractors that having the ability to leverage learnings from past projects has the potential to improve the quality and speed at which they can deliver projects, ultimately helping them to better deliver for their customers (owners) and improve their margins on projects.”

According to second quarter data from the U.S. Chamber of Commerce Commercial Construction, 88% of contractors are having difficulty finding workers forcing them to pull back on projects
June 17, 2021
Latest