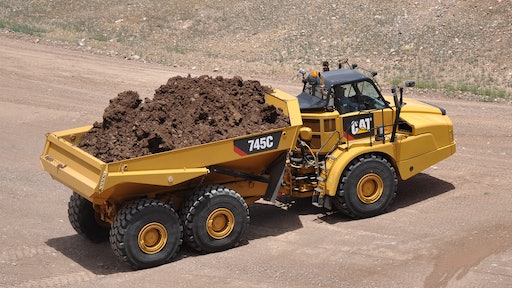 The Cat 745C articulated dump truck is the same width as the 740B, with slightly lower dump-body rails. The bed is 16 in. longer to accommodate a 1.5 tons more payload.

The new Cat C18 engine powering the 740C EJ ejector truck and all-new 745C is 4.2% more powerful than the C15 it replaced, and Caterpillar says it will produce as much as 10% better fuel efficiency.

Caterpillar trimmed a ton from the 740B in making the new flagship 745C. Much of the weight came out of the new high-density powershift CX38 transmission (also in the 740C EJ ejector truck). The CX38 has 18% fewer parts and weighs 50% less than the CX31, cutting 1,800 lbs. of vehicle weight. Cat designers were able to add two gears while reducing clutches and gear trains, and Cat says the 9-speed can deliver up to 10% better fuel efficiency.

Caterpillar says the 740C EJ and 745C, with the C18 mated to the CX38 transmission can accelerate to 80% of maximum speed 21% faster than their B-Series counterparts, their speed on grade is 8% to 15% better, and forward rim pull is 9% greater. Reverse speeds are improved, and reverse torque was increased 35%.