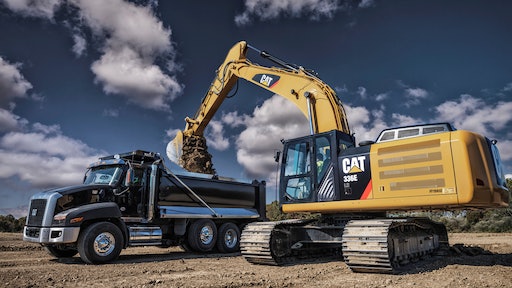 The 336E H reduces fuel consumption by up to 25% which translates up to 66 tons less CO2 produced than the standard 336E over the course of a year and is equivalent to taking 24 hybrid cars off the road.

If you plan on attending the U.S. Open next year in Pinehurst, North Carolina, pay special attention to the newly widened roads. It may not be your main focus if you’re a fan of golf, but as one of 400,000 fans congregating, and needed to get around, at the event, you are sure to appreciate the expanded roadways.

In preparation for the U.S. Open’s 2014 Golf Championships, S.T. Wooten Corporation was selected as the premier contractor by the North Carolina Department of Transportation (NCDOT) to rapidly expand North Carolina Highway 211 (NC 211) and accommodate the thousands of golf fans anticipated at the event.

NC 211 is a primary state highway in North Carolina and traverses mostly through the Sandhills and Coastal Plain regions of the state; connecting the cities of Candor, Aberdeen, Raeford, Lumberton, Bladenboro and Southport. The widening project consists of widening the road to a multi-lane highway with curbs and gutters, sidewalks, as well as installing traffic signals and signs along the upgraded multi-lane highway. Because of streams and wetlands in the area, NCDOT worked closely with the U.S. Army Corps of Engineers.

As a family-owned business headquartered in Wilson, North Carolina, S.T. Wooten’s reputation is built around leveraging cutting-edge technology to ensure the highest levels of safety, quality of work and productivity. The company has a history of developing creative solutions that help protect the environment, reduce disruptions to the public and speed up efficiency in the face of tight deadlines.

When the time came, Wooten decision makers partnered with Caterpillar and selected the Cat 336E H Hybrid Excavator to assist their company’s construction progress on the 7.5-mile-long project. Cat Dealer Gregory Poole helped leverage the sustainable innovation on the job.

The widening of NC 211 began in late 2011 and is expected to be completed in May of 2014 – just in time for the U.S. Open in June of 2014. At the time of this writing, the Cat 336E H had been on the site for about a month, operating approximately 11 hours a day and loading fill material in preparation for the road grading process.

Ricky Riley, Wooten Equipment Manager, says the Cat 336EH is experiencing 4.6 gallons* per hour fuel burn in their specific application. The new technology is proving why a quick payback with uncompromised productivity is no longer a myth as it relates to sustainable hybrids manufactured by Caterpillar.

“It’s a lot faster than I’ve ever run,” Poindexter says after using the new excavator to load one of the trucks that run the fill material from the ball pit where the Cat 336E H operates. Poindexter notes that the machine is “so quiet!” Measured at only 69 decibels, the operator station sound level may be lower than the average household blow dryer or vacuum cleaner.

Mark Wilson, Wooten Site Foreman, commented that he is “pleased with the machine’s performance.”

When will the championships be played?

When was the U.S. Open last played in Pinehurst?

Why do the tournaments have "Open" in their name?

The U.S. Open and U.S. Women's Open are so named because they are open to any golfer who meets the handicap criteria and scores low enough during several qualifying rounds. In 2013, applicants for the U.S. Open had to have a handicap index of 1.4 or less. Those applying for the U.S. Women's Open had to have a handicap of 4.4 or below. A handicap, which is calculated using a complicated formula, generally represents the number of strokes over par that a player would be expected to shoot during an average round on an average course.

How many people will attend the Opens?

What other important golf tournaments have been played in Pinehurst?

Have other notable sporting events been held in Pinehurst?

The total value of US construction put in place rose 1.4% in August on the strength of a substantial jump in spending on single-family housing, while big nonresidential sectors such as power, commercial, office and transportation sank
Larry Stewart
October 1, 2020
Follow Us