Construction Employment Rises in All But 8 States 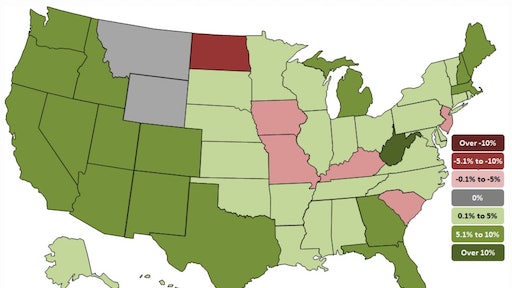 “It is heartening to see such widespread construction job gains,” said chief economist Ken Simonson. “However, unexpected, steep cost increases for many materials may force some contractors to lay off workers, while passing on price hikes will likely cause public agencies and private owners to delay or cancel projects.”

Only six states shed construction jobs between May 2017 and May 2018, while construction employment was unchanged in Montana and Wyoming. New Jersey lost the most jobs (-4,600 jobs, -3%), followed by:

North Dakota added the highest percentage of construction jobs for the month (8.5%, 2,100 jobs), followed by:

Association officials said that rising costs for many construction materials are likely to undermine future employment growth in the sector. They noted that contractors will have a hard time passing the additional costs along to their clients, leaving less money available to invest in new personnel or equipment. And they urged administration officials to reconsider imposing new tariffs that are likely to undermine economic growth.

“Construction employment in many parts of the country could be impacted as firms get caught in the crossfire of the looming trade war,” said Stephen E. Sandherr, the association’s chief executive officer.

View the state employment data by rank, state and peak.