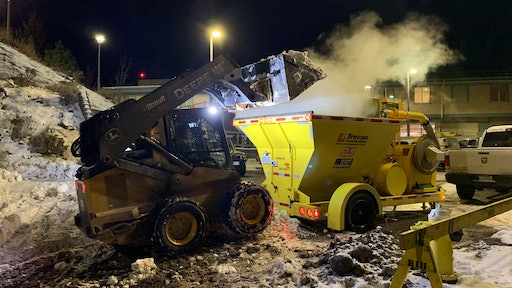 Using the CT-15 Trecan Snowmelter takes three commercial haul trucks off the road for every hour of use. The unit can melt a 2-yd. bucket of snow in less than 50 seconds, up to 15 tons per hour.

But an alternative approach that is gaining traction both in the United States and Canada is to melt the snow in place on the parking lot and deposit it as runoff into the storm system. One Canadian firm that is using this approach with significant success is Lyons Landscaping, headquartered in Kamloops, British Columbia, Canada, with site locations in Salmon Arm, Kelowna and Vernon.

Specializing in landscaping for 20 years, Lyons has been performing snow removal for its off-road customers since 1995, according to Steve Blackmore, co-owner and construction manager. He says the company generates 60% of sales from landscaping including construction; maintenance; “specialty landscaping” such as fencing, irrigation, and bulk sales of rock and gravel; and 20% of sales from a retail store and plant center -- including a market featuring fresh fruits and vegetables. But each November 1 the company refocuses its efforts and switches to snow removal, which Blackmore says accounts for 20% of their revenue.

“Our summer clients wanted someone who would be reliable and do snow removal, so we started with just a pickup truck and a blade and we learned the business,” Blackmore says, adding that the company today services “hundreds and hundreds” of snow removal locations, ranging from private residences to large commercial properties and malls.

“That really helps with employee retention to keep quality workers through the winter,” Blackmore says. The company employs 80 people in the winter and 120 at peak season in the summer. “It enables us to serve clients year-round, which really helps develop and maintain our relationships with our customers.”

Blackmore says Lyons has more than 60 pieces of equipment, many with specialized hydraulic plows to handle its driveway work; a hand-shovel team where each truck and trailer is outfitted the same with ATVs, snowblowers, backpack blowers and salt spreaders to handle sidewalks; and 15 pieces of heavy equipment including skid steers, loaders and tractors, all of which are outfitted with either an hydraulic plow or extended box plow. Many of their snow removal dispatchers are certified in Advanced Snow Management through the Snow & Ice Management Association.

But it’s the company’s approach to snow removal on larger properties that is unique. Blackmore says the company has commercial trucks to haul snow from a property if that’s what the customer wants, but it also uses a snow melter – the only melter he knows of being used on a regular basis in British Columbia.

“It’s exciting because it’s using technology to be more efficient, more effective and safer,” Blackmore says. “No one wants to watch and listen to a bunch of large trucks and machinery work all night moving snow, so we use the melter to get in and get out safer with less impact.”

The melter Lyons Landscaping uses is a CT-15 Trecan Snowmelter, by Trecan Combustion, Nova Scotia, which has been manufacturing both stationary and portable models for 40 years, according to Steve Wheatcroft, managing partner, Spectrum Equipment, which supplies the melter to Lyons Landscaping. The CT-15 is a trailer-mounted portable melter, hauled from site to site by a pickup truck, that is part of Trecan’s line which includes models that can melt up to 350 tons of snow per hour.

Wheatcroft says a Trecan melter is used on almost every major airport in the snow regions of North America, and many cities use them as well. He says Boston, for example, relies on about 50 melters because it takes dump trucks filled with snow 90 minutes to get to a snow dump, “so it’s much more efficient to bring the snow to a melter and get back on the roads.”

The snow melters feature a melting tank into which snow is dumped by a skid steer. A pre-burner melts the snow to create a water bath, and very hot air is blown into the water bringing the melt tank water to a temperature of around 70°F, agitating it.  Wheatcroft says that the hot air blown into the water creates “an almost turbine effect” and the agitation of the water melts the snow as it is dumped into the hopper. The melted snow fills the hopper and when the water level reaches an overflow, much like the overflow in a sink, the water flows out of the tank and onto the ground, into the storm system.

“The melters discharge the water into the storm system at a time when there’s no water in the system, so you’re not creating any extra strain on the system,” Wheatcroft says. “It actually takes the strain off the system because it’s melted in the winter and not as the weather warms and when the system handles other water from melt and rain.”

Blackmore says there was initial concern about the quality of the water being discharged into the storm system, but local officials and public agencies now realize there is no issue. “We have the okay by the city because what ends up going into the catch basin from the melter is the same that would go into it when it melts on the street,” Blackmore says. “In fact, during the melting process garbage, sand and gravel is removed by a skimmer and tray system.”

Built for a smaller parking lot footprint, the diesel-powered CT-15 melts up to 24 tons of snow per hour. Wheatcroft says a tandem axle dump truck carries about 6 tons of snow and the CT-15 model can melt between 2 and 4 truckloads of snow per hour depending on snow density. He says the efficiency of the melters varies depending on how much snow falls, the density of the snow and the distance from the snow removal site to where you have to haul it to dump the snow.

“If you have 1 inch spread over 10 acres and you push that into a pile, that’s a lot of snow you have to haul away,” Wheatcroft says.

Blackmore estimates that melting snow using the CT-15 takes three commercial haul trucks off the road for every hour of use. Blackmore says Lyons typically use a 1- or 2-yd. bucket on a skid steer to dump snow into the melter. He says the speed of melt varies with the type of snow, but he says they can melt a 2-yd. bucket of “typical” snow in 30 to 50 seconds.

Blackmore says the melter is safer than traditional snow removal operations, which often involve trucks hauling snow away from a property and then returning empty for another load. “At a hospital, for example, if they have to run up and down the same road that an ambulance uses, you just increase the chances for an accident,” Blackmore says. “The snow melter can be positioned in a small space, out of the way of traffic and cordoned off.”

He says smaller vehicles such as skid steers deliver snow to the melter, working out of the way of other traffic, and the process is quieter than the standard snow removal operation. He says another advantage of melting snow is that there is less trash left in the dump area, usually a field, when the snow finally melts. Also there are no additional dumping fees charged back to the customer.

“When you haul away snow in the traditional way, you’re picking up whatever is beneath the snow and hauling it to where the snow gets dumped in a field. Then there’s all the trash left after it melts.”

The snow melter, however, screens trash out on the top and any gravel picked up falls to the bottom of the melter.

“All contaminants are screened out,” he says.

“At Lyons we truly care about our culture, our clients and our community,” Blackmore says. “We bought the snow melter because we know it’s better for the environment and because it’s a safer way of removing snow. We’re proud to support our community and be leaders in the industry and this is one way we can do that.”

How to Prepare for Snow Plow Season

How to Plan for Snow Removal Business