Many Denver streets gain new life at a considerable savings through a major preservation program that recycles and paves in one pass. 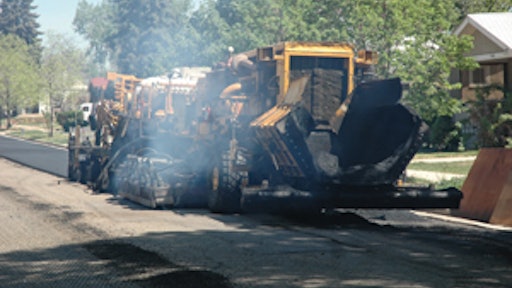 Denver's City and County Department of Public Works' Street Maintenance Division maximizes it budget by allocating over 30 percent of the funds it receives to road preservation — hot in-place recycling and chip seal.

This is the fifth full year the agency has contracted with Lawrence, KS-based Cutler Repaving to rejuvenate many of the city's residential streets using a hot in-place recycling process that turns old pavements into a new base and then tops the structure with a fresh hot mix asphalt layer in one pass.

The 2006 budget earmarks $2.6 million to recycle 390,000 yards of worn pavements. During the first five years of the program, the preservation approach was used to recycle 1.1 million square yards of asphalt, saving the agency over $5 million compared to a conventional mill and overlay approach.

"It's been such a cost-effective way for us to address a lot of the streets we have in our network," says Dan Roberts, P.E., director of the street maintenance division. "Most of the streets we target for hot in-place are aging residential streets that don't have a lot of heavy traffic volume. By recycling the aged pavement surface and then overlaying it with new HMA, we're able to extend the life of that road at a very reasonable cost. And the process allows us to refurbish a street within a day or two from start to finish."

The one-pass hot in-place process heats, scarifies, rejuvenates the existing aged pavement — turning it into a new one-inch leveling course, and then places a new one-inch layer of virgin hot mix directly over the yet-heated recycled course. Since Denver supplies the hot mix used in the process, additional recycling benefits are achieved. Denver incorporates 20 percent reclaimed asphalt pavement (RAP) in the mix it produces. The process works extremely well, according to Roberts, because it not only completes both recycling and new HMA placement in one pass, but it also achieves a stronger thermal bond between the heated recycled leveling course and the new driving surface.

The one-pass recycling process is unique to Cutler Repaving, which fabricates its own double-screed recycling equipment.

Denver tapped into Cutler's road preservation expertise to initiate a hot in-place program several years ago when the agency realized it could not handle the workload required to maintain its street infrastructure with the existing paving crews it uses for its milling and overlay projects. An extensive pavement management program determined that the street maintenance division needed to increase its resurfacing efforts substantially in order to maintain the quality of the 1,800 centerline miles of roads within the network. Adding another paving crew was considered, but that would have taxed the department's asphalt production facility, forcing the department to either purchase asphalt from outside vendors or lobby for additional funds to expand its internal capabilities.

The initial pilot program in 2001 and subsequent projects have proven to be a winning approach to improving more roads without expanding the street maintenance division's operation. Each year the program is expanded, improving roads and saving tax dollars in the process. By working with Cutler Repaving's hot in-place process, Denver initiated yet another strategy to extend the life cycle of many roads which would have been targeted for a mill and overlay at a much higher cost. Roberts estimates a 30 percent savings by using the hot in-place process over the conventional 2-inch mill and overlay approach. That's not to say those streets will never need to be reconstructed or refurbished with a mill and overlay process, but the hot in-place recycling adds years of service and stretches the dollars available to maintain streets within the network.

Cutler's exclusive repaving process heats the existing pavement to 300 degrees F. Once softened, the pavement is scarified to a depth of 1 inch and then a rejuvenating agent is added to restore the viscosity of the aged asphalt.

The rejuvenated pavement is then reapplied and distributed with a screed as a 1-inch leveling course. While remaining at a minimum 225 degree F, a virgin hot mix asphalt mat is placed over the recycled leveling course. Heating, scarifying, applying rejuvenating agent and applying new overlay is done in a one-pass process with the proprietary equipment Cutler uses. The process not only improves bonding between the recycled leveling course and the new driving surface, but it also reduces the construction traffic in and out of a work zone since both aspects of the process are completed simultaneously.

For Roberts and Denver taxpayers, the process delivers a high-quality road with fewer disruptions to homeowners and motorists, and at a cost that's lower than conventional mill and overlay roads.

The efficiency of heating up a road surface to rework the aged material and then using that same heat to bond a new driving surface results in a better engineered structure that will not delaminate because the two layers (recycled leveling course and new HMA driving course) have been compacted into one lift. And additional engineering benefit to the hot in-place process is that all joints and seams are also thermally bonded. When paving and adjacent lane, the recycling train reheats the edge of the completed repaved lane, resulting in a more durable, higher-density seam when compacted together.

Chip seal — the other preservation component

To further extend the life cycle of its streets, Denver also uses a chip seal program to preserve recently paved roads. Chip seal is the first surface treatment applied approximately seven years after a new or mill and overlay road has been constructed. In 2006, over $1 million has been earmarked for the street maintenance division's chip seal program.

Through its street management analysis program, chip seal extends the life of the asphalt another seven years before the road becomes a candidate for the hot in-place process. As a result, the hot in-place strategy is an intermediate maintenance step between chip seal preservation and a full rehabilitation mill and overlay project. That allows the city and county of Denver to get about 20 years out of an average road, generating a substantial reduction in its overall pavement management costs.

"On average, hot in-place has reduced our pavement management costs by 20 percent," Roberts notes. "When you combined that savings with what we're doing with chip seal, you can see how we're maximizing the dollars we spend on building and maintaining good roads. Even with some of the budget cuts we've experienced recently, we're still able to operate a substantial resurfacing program to keep our roads in good condition." 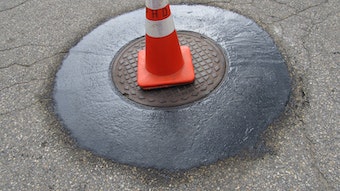 The CSV does not require a permit to transport so the unit can be transported legally at all hours with an 8-ft. 6-in. maximum transport width.
Rosco - A LeeBoy Company
March 8, 2017

The award recognizes the highest quality of workmanship and compliance with the best standards of practice when using asphalt emulsions.
Asphalt Emulsion Manufacturers Association (AEMA)
April 22, 2014

Unsurpassed adherence to pavement and resistance to shoving and cracking, when it comes to long lasting mastics, there’s only Mastic One®
February 2, 2021
Chip Seal Equipment & Materials