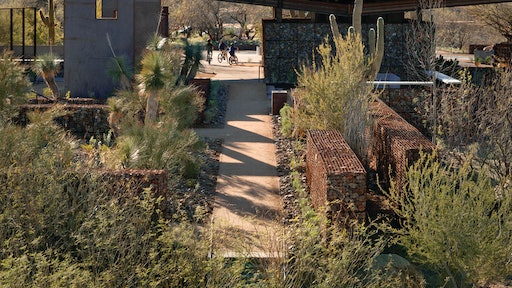 The park is located on a 34-acre site in the middle of the Arizona desert where temperatures can reach 100 degrees F.

Build it and they will come … even in the middle of the Arizona desert. On 34 acres of rugged Sonaran Desert terrain in Scottsdale, Arizona, sits the George “Doc” Cavalliere Park. Master planned and designed as a model of sustainability, the park served as a national pilot project for Sustainable Sites Initiative (SITES) program and earned a three-star certification from the national program that recognizes sustainable landscapes for their exceptional planning, design, construction and maintenance.

The vision for Cavalliere Park was to create a new standard for sustainable public park design in an arid environment. By combining a strong modern design aesthetic with the utilization of regionally appropriate materials, the design successfully integrates SITES program elements into a topographically challenging site. Throughout the process the project team had to balance neighborhood input, the technical demands of stormwater retention and a decreasing operations and maintenance budget.

A masterpiece in the making

Completed in 2012, the $4.3 million community park was already under construction when it was selected to be a SITES Pilot Project. Neither LEED nor SITES certification was initially a goal of the project, since it would not have qualified under LEED, and SITES Guidelines had not yet been released. Even without the certification goals, the project was designed to be a demonstration project for sustainability. When the SITES Pilot Program was announced, the city of Scottsdale elected to pursue certification honoring their commitment to be a leader for sustainability in the valley.

Located on rugged desert terrain, the site had been previously developed as part of north Scottsdale’s regional stormwater management system and included the construction of a large earthen dam and two significant retention basins. Project requirements included the enlargement of the upper basin to accommodate a total of nearly 50 acre-feet of stormwater volume, dramatically influencing the park's layout and design.

A burm on one end holds water in and installed pipe meters how fast that water flows,” he says. “The requirements for the burm are stringent. If it held too much water, it became a dam. If it didn't hold enough water, it didn't meet requirements the city had for flood control.”
The stormwater retention aspects of the site needed to remain in place even after the park was constructed. “Sixty percent of the park is designed to flood,” adds Markham.

As the general contractor, Markham Contracting was responsible for removing 120,000 tons of excess material from the site to prepare for construction of the park. All material was carefully documented to maintain the stormwater retention requirements.

“The material we hauled away from the park site was reused on another city site,” explains Markham. “This allowed even the grading process to be a sustainable feature of the park.”

Sustainable features at Cavalliere Park include:

On-site stormwater management. The shape and design of the 20,000-square-foot central canopy and restrooms took their form directly from the nature of the site, with the roof form closely mirroring the slope and tilt of the adjacent mountainside and the restroom walls utilizing the same gabion construction as the site retaining walls. In addition to providing shade, the canopy roof also functions as a large rainwater collection area, which directs water into a central collection basin where it is then distributed to the native landscape.

Preservation and restoration of native plants and soils. A primary strategy for the park was the preservation and restoration of the site’s natural resources. The project utilizes a 100% native plant palette. All native trees, cacti and plant communities were surveyed as part of the design process. A number of beautiful existing mesquite trees that were too large to salvage were incorporated into the layout of the parking and shade structure through the use of steel retaining wall systems that preserved the existing grade around the trees. All other trees and cacti were salvaged and reused on-site to restore significant areas of desert upland and riparian plant communities.

During the grading process, operators discovered areas of solid rock. “The city asked us not to blast the rock so a new solution was devised,” says Markham. Large outcroppings of rock were left in the landscape, some protruding from retaining walls and some left in their original positions within the wall. “It was a negative turned positive, and it’s one of the first features people notice and comment on in the park,” he adds.

Reuse of materials salvaged on-site. Parking, driveways and paths were paved with stabilized decomposed granite, which utilized only site-salvaged materials and dramatically reduced drainage runoff and the urban heat island effect, while retaining a natural desert character. Sustainable user practices are encouraged by providing designated parking for carpool and low-emission vehicles, as well as connections to the citywide trail system to create access for pedestrians, bicyclists and equestrians.

Elimination of unnecessary paints and finishes. The steel, concrete and rock-filled gabion baskets provide a regionally appropriate and sustainable palette of materials on-site. All site elements were custom designed using either natural steel or concrete to eliminate the use of industrial finishes. The naturally rusted roof panels, structural components, steel planters, bridge and other site elements are all made from high percentage content recycled steel and continue the palette of desert colors and textures found in the paving and gabion structures. The strict use of natural unfinished materials eliminated the on-site release of VOCs and will greatly reduce future maintenance costs. Even the lines of the basketball courts are natural, since they are sandblasted in place instead of being painted on. “There is no paint in the park,” stresses Markham.

Incorporation of sustainable technologies such as PV panels and LED lighting. High-efficiency LED lighting was used throughout the site and all lights are continually monitored through a central Greengate Controlkeeper system. A grid-tied, 24-kW solar photovoltaic system provides 100% of the park’s energy requirements, resulting in net-zero energy consumption.

“This was a magnificent project that we are very proud to have been a part of,” concludes Markham. “I am amazed that even in the middle of the day in the summer, when many Arizona parks remain empty due to the heat, there is always someone in the Doc Cavalliere Park. I believe it’s the most used park in Scottsdale.”

One of the greatest challenges for this site was integrating nearly 50 acre-feet of stormwater detention volume into a sloped site, while minimizing overall site disturbance.

This was accomplished by utilizing more than 4,000 rock-filled, stacked gabion baskets to create vertical retaining walls, which integrate the park into the existing desert landscape and typography. The resulting design provides regional flood-plain protection and increased storage capacity (nearly 50 acre-feet), as well as limited the need to extend grading into undisturbed portions of the site.

Because the site must maintain the functionality of a stormwater detention basin, it was important to program site elements to maintain Cavalliere Park as an active community park even during storm events. Through detailed coordination with the engineering team, and thoughtful selection of materials, many park elements maintain their usefulness during periods of inundation.

Faced with an ever-shrinking operations and maintenance budget, the city of Scottsdale and the design team engaged several design strategies to reduce the cost of long-term park maintenance for Cavalliere Park. A large part of that strategy involves using native species which naturally require little regular pruning, fertilization or watering. Additional strategies, such as the elimination of painted surfaces and installation of artificial turf, reduce the long-term input required for the park. Taking these measures ensures that the city will have the capacity to maintain this park as designed.

For a complete, interactive version of this article, click here to download the Spring 2014 issue of Sustainable Construction.

HeidelbergCement’s subsidiary Ciments Calcia presented the draft terms of its large-scale investment and reorganisation programme for several of its sites in France.
HeidelbergCement AG
November 18, 2020
Follow Us