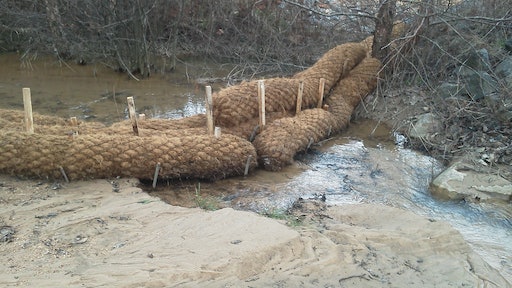 Erosion control products, including coir logs and jute mesh matting, slow erosion in the existing stream. Silt that used to end up in Lake Norman is visible in the foreground of the photo.

Relocating an existing stream during the rainy season in a highly visible area of North Carolina is never an easy task. But it’s one that Clark/Royal Contractors took on with determination.

The Mooresville, North Carolina, general contractor is no stranger to challenging projects. Owners Kevin Clark and Devin Royal started their company in 2010 during the height of the economic downturn. When many companies were closing their doors, Clark and Royal saw the opportunity for success.

And they were right. Today the company is a turnkey site contractor licensed in both North and South Carolina. Clark/Royal also holds Building and Highway classifications, and is a qualified North Carolina Department of Transportation contractor.

“We have experienced the best year since we opened,” explains Devin Royal, Owner. “We’ve gone from eight employees to 35. Our volume of work has increased exponentially and is continuing in that direction. Our goal for this year is to double revenue, and we were nearly half there in the first quarter of the year.”

He attributes this growth to his dynamic team of professionals with years of experience in paving, concrete, earthwork, storm drain, water and sewer projects. “We all work together with our customers and that means everyone, from our administrative group and field professionals to our dealer, Carolina Cat.”

“We set our sights on more than just the bottom line because these are targets that are constantly moving,” he adds. “Rather, we focus on providing our team with a workplace environment that is conducive to positive production by providing the best equipment and training possible.”
Along with field personnel determination and know-how, the equipment is what helped Clark/Royal achieve success with the Talbert Point Stream Restoration project.

The Talbert Point Stream Restoration project began in April of last year and was completed three months later. The scope of work consisted of relocating an existing stream to relieve high-velocity flows and stress on a nearby wetland area that supported a variety of aquatic life.

The stream is located adjacent to the Talbert Point Business Park, which is home to the NASCAR Technical Institute. The high visibility and volume of traffic flowing through the business park meant the project had to be completed on time and with as little interruption to traffic flow as possible.

“The industrial park was originally developed with detention ponds scattered throughout,” explains Peyton Woody, Project Engineer and Manager. “One of the detention ponds backed up directly to the stream and during high water flow events, the creek eroded away at the base of the pond dam and caused excessive erosion within the existing stream bed that flows directly into Lake Norman. This erosion issue was creating high turbidity in the creek, and Lake Norman, which is a source of drinking water and recreational activity for the local community.”

Partnering with local engineers and governing bodies, Clark/Royal, acting as the general contractor, created a bypass channel adjacent to the existing stream. During high flow events, water overflows from the original stream bed into the bypass channel, diverting the stormwater away from the wetland area surrounding the stream. This solution also slows the velocity of the stormwater discharge to Lake Norman, keeping erosion and turbidity within allowable levels.

To create the bypass channel, a diversion structure was designed and constructed with gabion baskets and placed within the existing stream to divert the high flows. A new stream channel was constructed adjacent to the wetlands area to allow the stormwater to bypass the wetlands during peak events.
“Only heavy rainfall events will require the use of the bypass channel,” explains Woody. “Normal rainfall continues into the wetlands to sustain the aquatic plants and wildlife, creating a rich environment for them to thrive.”

The bypass channel is heavily armored with various erosion control products such as coir logs, jute mesh matting and the use of “live stakes” which are small diameter trees found and cut in the field during construction. The live stakes hold the matting in place and over time they grow into larger trees to help stabilize the creek bank.

“Cat equipment provides top-of-the-line fuel efficiency in all of its models,” says Woody. “With the installation of Vision Link on all of our machines, we are able to track run times, idle times and overall fuel consumption on a daily basis. This has allowed us to cut cost and reduce our footprint on the environment.”

We utilized rubber track equipment for low impact to highly sensitive areas within the wetlands and stream,” says Woody. “We found the rubber-tracked machines had the least impact on the silt and sand, and we utilized these machines wherever we could. We performed most of the work in the wetlands by hand to avoid creating more turbidity and erosion than was already there.”

USE THE EQUIPMENT THAT WORKS

“The equipment we utilize on projects like this means just as much as the processes we implement to complete the job,” stresses Woody.

“We’re very particular about our equipment,” agrees Royal. “We use Cat equipment exclusively. The equipment meets all emissions regulations and performs the way we need it to.

“With the addition of three more Cat 320E Hydraulic Excavators next month, they will bring our fleet to a total of 24 pieces of Cat equipment,” says Royal.
“Partnering with our dealer, Carolina Cat has provided us with the support we need; this is truly a team effort,” adds Woody.

“The project was completed flawlessly and is thriving with aquatic life,” concludes Woody. “Erosion control has been properly maintained, and turbidity levels within Lake Norman have returned to normal at the location of stormwater discharge.”

7 Ways to Gain a Competitive Edge in Construction

It was not long ago that most construction companies were experiencing growth year after year. Companies expanded; competition increased and margins shrunk. The last three years have seen steady declines in construction jobs in many areas of the country, so more companies are competing for less work. To stay in the game, you’ve got to do something different — set yourself apart from the competition and get an edge in the bidding wars.

Here are ways you can compete more effectively:

Developing sustainable practices is a way for life for employees at Clark/Royal Contractors.

"Our team continuously strives to develop new ideas and search for areas where we can reduce our environmental footprint," says Payton Woody, Clark/Royal Project Engineer and Manager. "For example, we’ve found that fuel consumption and CO2 emissions are two of our largest areas of impact.  Our sustainable practices may seem small at first glance, but simple things like turning of a machine while not in use and not allowing equipment to idol cuts down of fuel consumption and CO2 emissions into the atmosphere.

"Also, preventing equipment operators from using the air conditioning with the doors open has also cut down on fuel expenses and consumption," he adds. "Making sure that our field crews have all the materials onsite to complete the task at hand each day prevents them from making multiple trips to suppliers and allows us to cut fuel costs and keep our crews working and generating billable time. We utilize VisionLink to track fuel consumption and idol time. The data is provided to field personnel for evaluation each month.

"We also provide incentives to our crews for keeping fuel consumption under budget," he concludes. "We feel that training and awareness is the cornerstone for achieving sustainable growth and development. With these steps we are reducing our footprint on the world and increasing profits."

Results of a new five-year study of recycled concrete show that it performs as well, and in several cases even better, than conventional concrete. Researchers suggest the recycled concrete can be a 100% substitute for non-structural applications.
Gigi Wood
December 3, 2020
Follow Us