Fuel for Thought: Diesel Alternatives for the Non-Road Sector 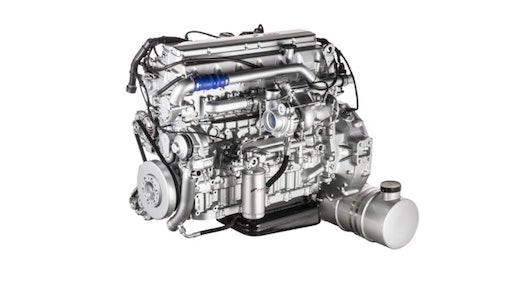 FPT is using what it's learned from its alternatively fueled on-road engines, such as the pictured Cursor 8 CNG engine, to investigate potential alternative fuel options for the off-road sector.

Environmental protection initiatives remain, for FPT Industrial and its competitors, a hot topic with the upcoming introduction of Stage V emission regulations, and future options for diesel fuel alternatives have risen as a result. While environmental improvements are the major catalyst for change, cost and the profitability for machine users will be the deciding factor in determining the viability and success of a mainstream alternative.

When compared to the on-road sector, diesel alternatives that have the potential for acceptance on a large scale are limited for the heavy-duty non-road mobile machinery market, where it is necessary to take into consideration high load factors, on-site fueling and high power density, combined with huge machine variety and low market numbers. FPT Industrial is using what it has learned from the on-road sector as it investigates several alternative fuel options.

Ultimately, the alternative fuel type that is most likely to be accepted on a large scale within the non-road machinery market will be the one that secures profitability for machine-users by minimizing total cost of ownership: a combination of elements such as the fuel’s cost, the fuel’s energy density and the product cost influenced by the synergies with the traditional diesel engine.

Additionally, high power density is required due to the mission and load profile requirements for heavy-duty equipment. Fuel logistics are also a significant consideration as often the machines are operated in remote areas away from the on-road filling station network, or are too large to be driven to a central location for refueling. The filling station is therefore transported to the machine so logistics, the cost of this and safety must be considered thoroughly.

Engine manufacturers must continue to increase validation efforts and investments during development to ensure the safety and environmentally-friendly nature of the product in a cost-effective manner as emission restrictions continue to tighten.

There are a number of alternatives to diesel fuel that have the potential to be successfully integrated with existing machinery. Ether-based substances such as Dimethylenther (DME) or Oxymethylenether (OME) also have oxygen within their chemical structure which supports low soot formation. However, the fuel injection system and the calibration of a current diesel engine would have to be modified to optimize combustion to run with these fuel types.

Ether-based fuels such as these lose their credibility as an heavy-duty non-road alternative to diesel fuel however, when comparing energy density to diesel and Ester-based fuels.

Again, Ester-based fuels such as Fatty Acid Methyl Ester (FAME) result in low soot emissions, but due to the introduction of Stage V this will have little relevance in the future. Additionally, the fuels are produced using food resources, still have low engine power, contain catalyst poisoning substances and lead to higher NOx emissions.

Paraffinic fuels on the other hand, such as Hydro-treated Vegetable Oil (HVO) or Gas to Liquid (GTL), are closer to diesel.

Second generation biofuels such as these will also have little technical impact on current diesel engine systems, the usability of the existing fuel logistics and fueling procedures, while their environmental benefits make these a hugely viable alternative.

Natural Gas (NG) provides an interesting opportunity due to existing on-road heavy duty NG engines, while creation of the right infrastructure offers the potential to switch to biomethane in the future.

During FPT Industrial’s research into different fuel options, NG has shown a positive effect on environmental issues, with CO2 output reduced by about 10% compared to diesel when the NG is taken from a fossil source. Biomethane also could be considered a positive alternative when looking towards a more sustainable agricultural sector where farms have the potential to be energy independent through the generation of alternative energy. There is the potential for them to power both their facilities and their equipment.

However, difficulties arise when reviewing energy density. When NG is in its compressed form (CNG) it is more than five times lower in energy density when compared to diesel. It would also be challenging to refuel on site, as this becomes even more complex when in liquid form (LNG), which has an energy density two to three times lower than diesel.

This does not exclude at all its use, especially in those sectors that can produce their own biomethane, the biological equivalent to natural gas, from by-products and waste.

Ultimately, the cost of developing and validating fuel alternatives will limit the number of different non-road fuel types, with the necessary cost increase needing to be accepted by those in the non-road machinery market. FPT Industrial’s aim during development is always to keep total cost of ownership as low as possible, and recognizes the fuel type that will be accepted in a large scale will be one that secures profitability for machine users.

Second generation biofuels, due to their characteristics and low impact on existing machinery, present themselves as promising options for future non-road fuels. Similarly, although CNG and LNG will cause usage restrictions due to the reduced energy density and therefore reduced operating time with one fuel tank filling, the availability of engines from the on-road sector and the low gas prices in some regions will drive its introduction. The main field of natural gas fueled equipment will be small non-road mobile machines with a relatively low load factor and/or short daily operation times.

Biomethane, in compressed or liquid form, having the same characteristics as NG, is also one of the more promising alternatives for those sectors able to produce their own fuel from by-products and waste.

Contributed from FPT Industrial, a subsidiary of CNH Industrial dedicated to the development, production and sale of powertrains for On-Road, Off-Road, Marine and Power Generation applications.

For contractors, a strategy for saving time and materials can lead to higher profitability and the good feeling of not creating unnecessary waste. Here’s a look at five techniques that are having the greatest impact on sustainable building construction.
May 20, 2020
Follow Us