Jobs in construction, manufacturing, mining and logging maintained their slow upward climb in December, but the pandemic continues to stall recovery.

The blue collar jobs sector continues to be one of the few areas showing steady job improvement, with sustained growth in the fourth quarter 2020. But the latest Blue Collar Jobs Tracker analysis hints at declines ahead, pointing to January’s less than stellar national jobs data.

“Consistent job growth at the end of 2020 shows blue collar industries were finally, albeit slowly, rebounding from the beginning of the pandemic,” noted Matt Sedlar, data analyst, Center for Economic and Policy Research (CEPR). However, he added, “The January numbers that were released last week don’t paint a great picture.”

Blue Collar Jobs Tracker is a project of the Center for Economic and Policy Research (CEPR) created to take a closer look at the path of job growth in four major blue collar industries: manufacturing, mining, construction and logging. The latest report shows employment in these sectors increased by 76,000 jobs in December, or 0.38% over the previous month. The three-month average from October to December was 83,670 jobs, or a 0.42% month-to-month change.

By region, the West saw the most substantial increase, rising 1.92% over the previous month to 36,800 construction jobs and likely led by a 10.2% bump for the month in construction starts for new privately owned housing. California is now only 4,700 jobs below its February pre-pandemic peak. Arizona and Oregon did not share in the gains, however, declining by 4,100 (-2.35%) and 800 (-.74%) jobs, respectively. 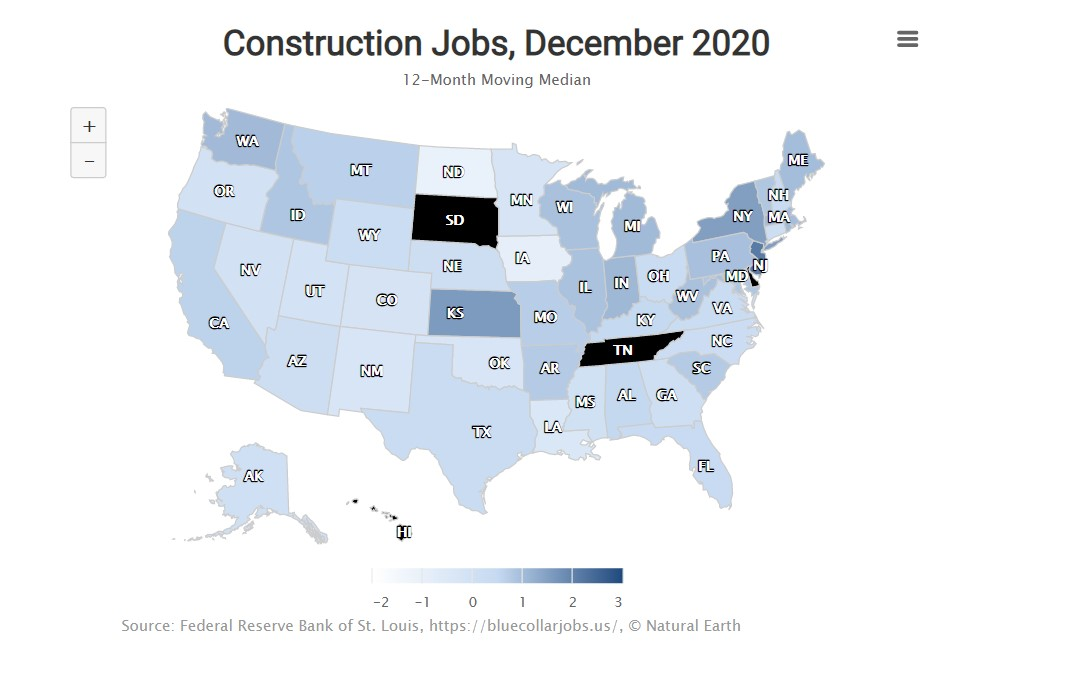 While the Blue Collar Jobs Tracker indicates a slow rebound from pandemic lows, the lower than expected national job growth in January reflects the COVID-19’S ongoing influence. Sedlar believes the winter surge in coronavirus cases could further delay job recovery, including in the blue collar sector.

“The sooner everything is under control,” he stated, “the sooner we can see the blue collar jobs recovery resume.”

Information provided by the Center for Economic and Policy Research and edited by Becky Schultz.