The FHWA has awarded $18.7 million in “Surface Transportation System Funding Alternatives” grants to multiple projects that will test new user-based funding methods for highways and bridges 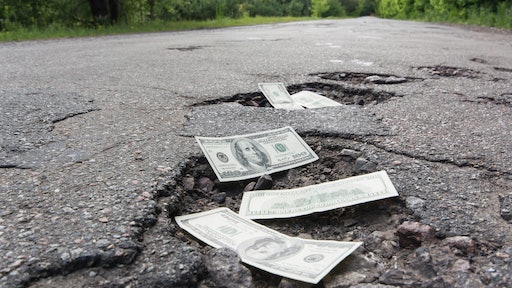 Established in 1956, the Highway Trust Fund (HTF) uses the federally established gas tax to help fund our nation's roads, bridges and highways. Each time you fill up your gas tank, you are helping to pay for the roads you're using. In fact, roughly 51% of road and bridge projects in the United States are funded through the use of the HTF.

The issue with this driver funded program however, is that the current gas tax hasn't been raised since 1993 and the user fee has not been indexed for inflation. Add to that the fact that cars are increasing in fuel economy and consumers are leaning more toward hybrid vehicles, and we're talking big trouble for infrastructure funding.

Congress has transferred roughly $144 billion to the Highway Trust Fund since 2008 to keep it solvent, according to the Congressional Research Service. Last year, Congress provided an additional $13.6 billion in a stopgap spending measure to keep the fund afloat, punting longer-term decisions about the fund’s solvency to this year.

Many states have started to experiment with pilot programs for vehicle miles traveled (VMT) or road usage charges and even Transportation Secretary Pete Buttigieg talked of these fees at his confirmation hearing, acknowledging that privacy and technological concerns accompanying a VMT fee would need to be resolved before being rolled out nationwide.

Since its creation in 2016, the STSFA grant program has provided $73.7 million to 37 projects in states across the nation. It funds projects that test the design, implementation and acceptance of user-based systems, such as a mileage-based fee. They also support outreach by transportation officials to help the public understand these new methods.

The “Fixing America's Surface Transportation” (FAST) Act directs the FHWA to establish the STSFA grant program to let states demonstrate new fee-based revenue mechanisms that could supplement the HTF. Among other things, the STSFA program requires applicants to address equity concerns, such as the fees’ impacts on differing income groups and geographic areas. It recognizes that a mileage-based, road-user charge system may potentially redistribute cost burdens among different users.

Road Charge Pilots Program: Caltrans will test the viability of current global positioning system technology to determine which roads are part of a public network and may be subject to a fee.

Testing Implementation Paths for Mileage Based User Fees (MBUF): The Coalition will demonstrate and test paths for MBUF in the DC metro area and seven states -- DE, MD, ME, NC, NJ, PA and VA.

Digital Mapping Data, Distance-Precision, and Transportation Taxation: Hawaii DOT will investigate the current state and completeness of digital mapping data to determine which roads are part of a public network and may be subject to a fee.

RUC Demonstration Project:  Kansas DOT will lead a joint effort working with Minnesota DOT to explore the impacts of RUC implementation in the Midwest, with focus on rural and agricultural populations and intrastate and interstate commercial freight and supply chain operators.

Alternative User Based Revenue Initiative:  Ohio DOT will obtain data for a large-scale outreach program geared towards educating the public about RUC.

Road Usage Charge Summit:  RUC West will host a conference that will explore opportunities and barriers to interoperability, expand knowledge about RUC and foster new partnerships.

Demonstration of Smartphone-Based Alternative to Current Gas Tax Structure: Dallas-Fort Worth will assess the feasibility and technological capability of utilizing smartphone technology to understand travel patterns and the development of an accounting framework.

UDOT will use 3-D modeling software, e-Construction, drones and other FHWA-supported technologies to improve project delivery.

White House confirms that the first proposal will likely address physical infrastructure such as roads, bridges and efforts to expand rural broadband access…the second will cover issues such as child care and health care.
Jessica Lombardo
March 29, 2021
Follow Us