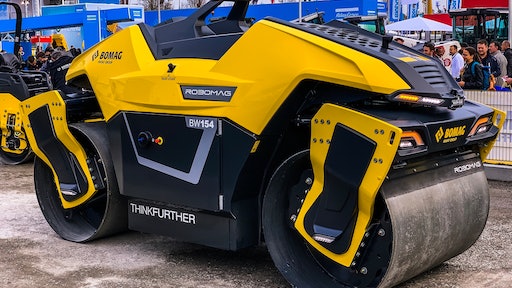 Many asphalt contractors will be quick to tell you that they can't find the workers they need to fill the open jobs they have. It's funny then, that these same contractors are the ones who are strongly opposed to bringing autonomous equipment to their jobsite. Many construction workers don't realize that these "driverless" pieces of equipment will never be designed to take away jobs of construction workers, but are being deployed to help combat the skilled labor shortage and keep workers on the ground safe.

While autonomous technology has existed for many years in mining operations, more and more interest has developed from both customers and manufacturers on autonomous machine concepts for the asphalt industry and equipment designers are started to respond.

“Compactors are a good place to start because they utilize processes with a high level of repetition, which can lead to operators losing concentration and performing inconsistently,” Bryan Downing, global sales consultant for Caterpillar Paving Products says.

“Poor layer durability often can be attributed to inconsistencies in processes, such as rolling pattern variations (poor pass coverage, improper vibratory system on/off variation or incorrect use of amplitude or frequency),” he says. “With the use of autonomous systems and semi-autonomous (operator assist) systems, the roller processes will be more consistent and precisely executed.”

Dynapac has introduced a similar concept with their SEISMIC technology that monitors the soil properties and automatically adjusts the frequency of vibration for optimal compaction and energy efficiency. The Active Bouncing Control System automatically cuts off the vibration of the drum when the material reaches maximum compaction characteristics.

Asphalt Compaction is Next

After seeing success with soil compaction, next up will be adding autonomy to asphalt rollers.

HAMM Compaction Equipment first announced they were working on a self-driving compaction solution in 2017.

“Rollers for asphalt and soil compaction will be among the first vehicles in which such systems will widely establish themselves,”  Stefan Klumpp, chief technology officer at HAMM says. “This is because, in many respects, they are closer to cars than many other types of machine are. This is why we have been dealing with this subject for some time.”

The first step, Klumpp said, is to ensure the machines’ sensors can appropriately measure stiffness to accurately decide frequency and amplitude. According to Klumpp, “the automation of the working process of the machine has to be optimized and further developed. As a result, the driver can concentrate on driving.”

Launched at bauma 2019, BOMAG introduced the ROBOMAG BW154, a fully autonomous tandem roller for asphalt compaction. Based on geo-fencing and GPS data, it can autonomously compact a pre-planned area and contains sensors for obstacle detection to improve safety.

Although manufacturers continue to invest in the possibility of autonomous equipment on the paving train, many manufacturers say that commercially available self-driving equipment is still at least 10 years away and automating more delicate equipment like the paver is even further down the road.

Take heart. Asphalt contractors are still very much valued for their expertise and no equipment can replace their "feel" for the equipment and the passion they have for their jobs.

Past practices of highway trust fund bailouts and an overly broad federal gas tax won't be a good match for what is already under-funded highway infrastructure the coalition says
Jessica Lombardo
April 7, 2021
Follow Us