Semcon has developed an autonomous compactor solution to help increase efficiency and quality during the construction of roads. 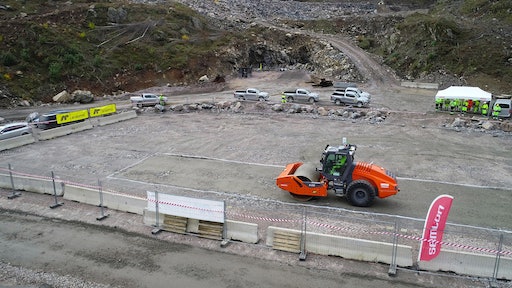 Semcon's autonomous solution establishes the route to be traveled via GPS positioning. This ensures the machine follows the same path for each and every pass to accurately and efficiently complete its task.

Semcon—an international technology company—has developed and validated a system for autonomous operation of a compactor. It developed the autonomous solution as part of a Norwegian innovation project relating to future road construction.

The objective is to eliminate difficult work for staff, reduce the time needed to build new roads and enhance quality, resulting in the longer lifespan of the roadway.

When building roads, compaction of the surface layers is crucial for ensuring high quality, resulting in safer roads that last a long time.

“This work requires a great deal of accuracy and experience, but at the same time it is carried out in a limited amount of space. These are perfect conditions for an autonomous solution, where one operator can control several machines that can work at night, for example,” says Thomas Eriksen, Technical Project Manager at Semcon in Norway.

When constructing roads, a compactor has to complete six passes over the surface with a minimum of 20 cm (0.4 in.) overlap at each passing. Semcon's autonomous solution establishes the route to be traveled via GPS positioning. This ensures the machine follows the same path for each and every pass to accurately and efficiently complete its task.

Optical sensors are used to detect whether there is anyone or anything nearby and stops the machine if necessary. A complete safety solution for safe civil engineering works will be prepared until the system is fully operational.

“This is a good example of how new technology is paving the way for safe, efficient solutions for road construction in the future. In the long run, it will create opportunities to build new roads more quickly and more cost effectively,” says Sebastian Kussel, who is in charge of technology and development at Nya Veier which is partnering with Semcon on the project in Norway.

The system can be used in various applications where operation and maintenance have to be managed safely and with high levels of precision and repeatability. Early applications for the autonomous system have included clearing snow on runways and brushing landing lights at airports.

Work for the project is based on a control system developed by Yeti Snow Technology AS, co-owned by Semcon, Husqvarna Group and Øveraasen.

The next planned step in the project is to perform tasks autonomously under restricted conditions by the end of 2020.