Experts say the highway materials sectors need to push for higher amounts of funding for a robust surface transportation bill and to do that, Congress needs to enact a sustainable and equitable funding mechanism for the Highway Trust Fund 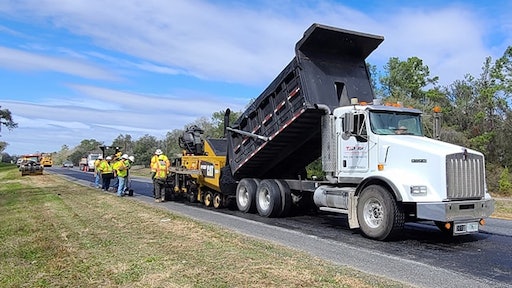 It's no secret that the lack of sustainable highway funding is the biggest challenge in the road building industry. The Biden administration has made it clear that infrastructure funding is a priority on their agenda, but what that funding looks like for highway contractors remains to be seen. For Democrats, infrastructure funding means finding ways to combat climate change and build resilient structures using green initiatives.

Biden is putting these green initiatives front-and-center in his “Build Back Better” infrastructure proposal that calls not only for building roads and bridges, but also for investments in electric vehicle charging stations, zero-emission buses, transit and zero-carbon electricity generation by 2035.

This expansive look at what our infrastructure means to our nation, puts what money we will receive for our roadways on the backburner as Democrats look to add funding for waterways, broadband and more to an infrastructure package.

During the National Asphalt Pavement Association virtual annual meeting, experts weighed in on where they think the industry should focus their efforts.

"Democrats are trying to reduce money for highways, forcing people to get out of cars and into public transportation," Stan Bass, chief growth officer at Vulcan Materials says. "We need to focus on the highway program. When we talk about infrastructure, we can’t assume people on The Hill know we’re talking about highways. We need to make it known that we need a multi-year surface transportation measure. No matter what other infrastructure is captured in these funding packages, we need to focus on a surface transportation package."

Driving green initiatives forward puts the road building industry at risk, especially as vehicles transition to electric and gas tax revenues continue to dwindle. Democrats have not come up with a clear proposal to replace the gas tax, which has been the traditional source of funding for surface transportation infrastructure, leaving the Highway Trust Fund (HTF) in dire need of a new funding mechanism.

"EVs are accelerating in their market share and that’s a challenge for an industry that relies on the gas tax," Jule Smith, chief operating officer at Construction Partners Inc. says and he notes that industry needs to push for a new funding mechanism that's both equitable and sustainable.

Congress has transferred roughly $144 billion to the Highway Trust Fund since 2008 to keep it solvent, according to the Congressional Research Service. Last year, Congress provided an additional $13.6 billion in a stopgap spending measure to keep the fund afloat, punting longer-term decisions about the fund’s solvency to this year.

Democrats have been quick to push an increase to the corporate tax rate to fund infrastructure but experts say that isn't the answer.

"Corporate tax increases head towards eliminating the Highway Trust Fund which won’t give states the visibility to see the money they are going to have to build long term projects," Bass says. "If they don't have visibility to those funds, how will they know what projects to invest in?"

The industry instead should continue to push for new user-based fees that are more sustainable long term than the gas tax.

"When we look at the electric vehicle space today, it represents 1% of vehicles on the road. But when you look at the polices to push EVs, that’s the principle concern from the financing standpoint with the gas tax becoming obsolete and underfunded," John Janes, president & CEO of Associated Asphalt says. "We need a different funding mechanism that balances out at the federal and state level. We need to find mechanisms that are balanced, equitable and sustainable. Something that reflects usage and consumption."

Many states are already experimenting with pilot programs for vehicle miles traveled (VMT) or road usage charges and even Transportation Secretary Pete Buttigieg talked of these fees at his confirmation hearing, acknowledging that privacy and technological concerns accompanying a VMT fee would need to be resolved before being rolled out nationwide.

"As an industry, we are optimistic about a highway bull coming through," Kirk Randolph, senior vice president, strategy & development, at CRH Americas Materials, Inc says. "We need everyone in our industry to mobilize their grass roots efforts. This is the bests opportunity we've seen in 10-15 years to get a substantial bill and even if we don’t see it happen until May or June, the industry should be make their priorities known and be ready."