The Highway Trust Fund was established in 1956 to invest in US highways, roads and bridges. Funded by a user fee on every gallon of gasoline or diesel fuel you buy, it's about to run out. Here's why. 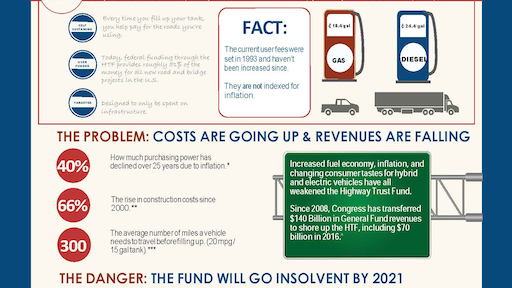 Established in 1956, the Highway Trust Fund (HTF) uses the federally established gas tax to help fund our nation's roads, bridges and highways. Each time you fill up your gas tank, you are helping to pay for the roads you're using. In fact, roughly 51% of road and bridge projects in the United States are funded through the use of the HTF.

The issue with this driver funded program however, is that the current gas tax hasn't been raised since 1993 and the user fee has not been indexed for inflation. Add to that the fact that cars are increasing in fuel economy and consumers are leaning more toward hybrid vehicles, and we're talking big trouble for infrastructure funding.

The Congressional Budget Office (CBO) projects that outlays from the HTF will exceed trust fund reserves by a cumulative $123 billion for the highway account and by $46 billion for the mass transit account by 2029. If no action is taken, the CBO estimates that both those accounts will go broke in FY2021.

In order to guarantee funding for our roadways, Congress must find a way to keep the HTF solvent. This means passing a gas tax increase.

A 15-cent increase in the Federal user fee would ensure HTF solvency and bring it in line with inflation. Thirty states have already taken action into their own hands and increased their user fee for infrastructure improvements in their communities.

The time is now for Congress to follow states' lead and act to ensure our vital roads, highways and bridges are fully funded for years to come.