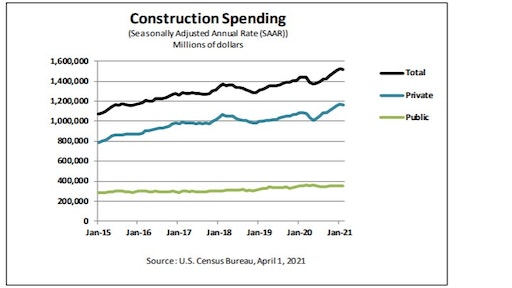 Nonresidential construction took the brunt of the impact, declining 1.3% from the previous month. “The downturn in February reflects both an unfavorable change from mild January weather and an ongoing decline in new nonresidential projects,” said Ken Simonson, chief economist, Associated General Contractors of America (AGC). “Unfortunately, it will take more than mild weather to help nonresidential contractors overcome the multiple challenges of falling demand for many project types, steeply rising costs, and lengthening or uncertain delivery times for key materials.” 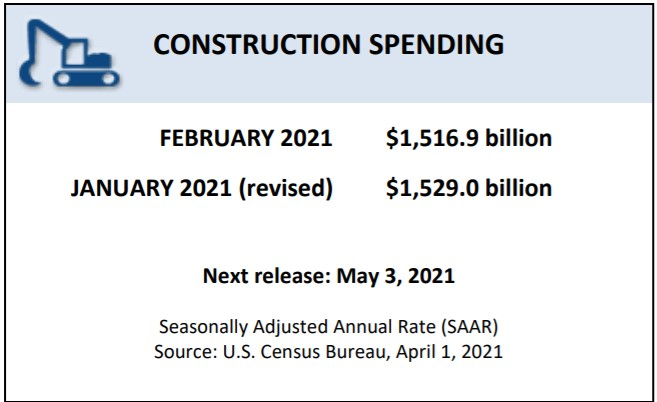 Declines in Both Public and Private Spending

Nonresidential construction came in at $447.8 billion in February, a 1% decline vs. January’s $452.3 billion in January. The only nonresidential segments seeing a modest gain for the month was transportation (+.8%). Segments seeing the greatest declines included lodging (-3.2%), health care (-4.4%) and religious (-2.0%).

Hardest hit was the commercial segment, which fell nearly 10% in February. Conservation and development dropped by 4.4% and educational experienced a 3.2% decline. Transportation experienced a slightly more modest dip of 2.5%, while highway and street was down just 0.6%.

Despite the declines seen in February, total construction spending has made substantial progress year-over-year. February’s $1.52 trillion is 5.3% above February 2020’s estimated $1.44 trillion, a considerable feat considering the industry had yet to feel much of the pandemic’s impact at that point last year. Residential construction spending is up a whopping 21.1% year-over-year vs. the same month in 2020, helping to offset the 6.1% decline in the nonresidential sector.

While nonresidential construction spending continues to struggle, this could shift quickly as the negative effects of the pandemic wane. According to Anirban Basu, chief economist, Associated Builders and Contractors, nonresidential construction spending is “poised to stabilize during the summer and enter 2022 with substantial momentum” as the U.S. sees an economic resurgence as vaccinations continue and the economy reopens.

The recovery in the nonresidential construction sector could be limited, however, by rising materials prices and unreliable delivery schedules, the AGC notes. Such inflationary pressures make it hard for firms to remain profitable as they have difficulty passing raising prices for construction work.

While acknowledging the proposed new infrastructure investment would help boost demand for many types of construction projects, association officials have urged Washington officials to take steps to address supply chain challenges, including ending tariffs on key materials such as lumber and steel.

“Contractors are having a hard time finding work, and when they do, they are getting squeezed by rapidly rising materials prices,” stated Stephen Sandherr, AGC chief executive officer. “New infrastructure investments will certainly help with demand, but the industry also needs Washington to help address supply chain problems and rising costs.”

To increase awareness, the association has posted a Construction Inflation Alert to inform project owners and government officials about the threat that rising materials prices and supply chain disruptions pose to project completion dates and contractors’ financial health.