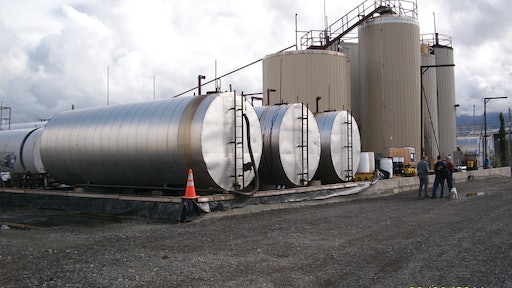 To find a solution, Hayden turned to OMI Industries and its Ecosorb 206A additive. Ecosorb products are environmentally friendly odor eliminators that do not employ harsh reacting chemicals or masking fragrances.

Ecosorb has products that remove odors from all asphalt production, including neat binders, rubberized, and ploymer-modified applications.

"Most asphalt production facilities were built before 'urban sprawl,' and without thought of commercial or residential neighbors," says Timcik. "But like so many others, the asphalt industry's desire to be a good neighbor – and an interest in odor control additives – led OMI Industries to develop liquid additives for asphalt production."

Ecosorb additives are usually introduced when the liquid AC (Bitumen) is delivered to the asphalt production facility and is put into storage. "These additives are easy to use, safe for the environment, offer no detrimental impacts on the physical properties of the asphalt and don't put workers in harm's way with the addition of harmful chemicals," says Timcik.

Denali Materials uses Ecosorb 206A additive during various stages of production and delivery. During a recent visit from an OMI sales engineer, Hayden noted two men standing downwind of a tanker truck into which a 40-ton load of polymer-modified asphalt was being transferred.

"After several minutes, the two men entered the facility and introduced themselves as city health and environmental inspectors, curious to know what was being used to combat the usual odor," says Hayden. "The OMI sales engineer was able to describe the science behind the natural Ecosorb solution."

By accounts from both city inspectors, the asphalt odor was eliminated from the airstream within seconds of the Ecosorb 206A additive being added to the transfer. The product proved to be 100% effective at eliminating – not masking – asphalt odor gases at the Denali Materials transfer station.

"The real question is, 'Who doesn't benefit from the use of Ecosorb products?'" says Timcik. "The surrounding communities near asphalt production plants, plant workers, road crews, motorists – in essence, anyone who comes into even remote contact with the asphalt industry will see - rather, smell - a benefit from the use of odor-eliminating additives."

Road Science is the only chemical supplier of asphalt additives and emulsifiers with an American Association of State Highway and Transportation Officials accredited laboratory, having originally achieved accreditation in 2001
Road Science
March 5, 2019

The ArrTekk 1295 chemistry lengthens the life cycle of micro-surfacing by 30 percent and improves mix control in harsh conditions.
Road Science
May 21, 2015

NIOSH is expected to release in the coming months a best practices document for roadway milling based on the work of the Silica/Milling Machine Partnership.
Occupational Safety & Health Administration
August 26, 2013
Asphalt

Industry stakeholders are strongly encouraged to continue to work together sharing their Superpave experience
Caltrans
August 26, 2013