With nearly half of its 29 plants offering WMA capabilities, Mar-Zane is a leader in progressive Ohio when it comes to producing warm mix asphalt 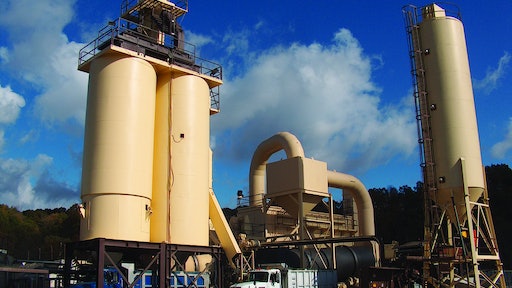 In 1944, Mar-Zane Materials was born as the asphalt division of Shelly & Sands, a vertically integrated road construction company that covers industry segments ranging from aggregate processing to asphalt production and paving. Headquartered in Zanesville, OH, Mar-Zane Materials began life with one asphalt plant in Marietta and one in Zanesville (hence the combined name of Mar-Zane).

Now, over 60 years later, the company has expanded to 29 asphalt plants and serves not only Ohio, but Indiana and West Virginia as well. Tom Jones, general superintendent, notes that the bulk of the asphalt produced by Mar-Zane goes to its biggest customer, Shelly & Sands. While the company produces over three million asphalt tons annually, the reason this asphalt producer is noteworthy is its focus on warm mix asphalt (WMA).

Jones notes that nearly half of Mar-Zane's asphalt plants have WMA capabilities, and his plan for the winter is to outfit up to five more plants with a WMA component.

Ohio seems to be more progressive when it comes to allowing the use of warm mix asphalt on its roads, compared to say Illinois, Michigan or even California. This, says Jones, is one reason he's so fully behind the concept of WMA and feels that in the near future, the federal government may be mandating the use of warm mix over hot mix on road construction projects.

"In Ohio, paving contractors just have to note that they're using warm mix," says Jones. "The state doesn't even blink. In other states, there's a lot of paperwork and gaining permission and proving warm mix is the right mix to use.

"Of course, ODOT doesn't want you going back and forth between warm and hot mixes," he continues. "Once you start a project with warm mix, you need to stay with warm mix."

Mar-Zane's 29 plants range from parallel-flow drums to counterflow drums and include some batch plants. Brands differ like the type of plant, and both depend on the market being served.

Mar-Zane employs the water injection process , but offers no particular loyalty to any one  warm mix manufacturer. Jones points out that the company has three different types of systems - AquaFoam, Terex and Stansteel - in its fleet.

As far as installing a warm mix system, Jones says it's fairly easy. "It's a simple installation process," he says. "Usually one work day."

According to Paul Schwan, with Aquafoam, installation varies slightly from supplier to supplier, but the basics are nearly the same. First, you must have water.  "Most systems have a water reservoir," he explains. "AquaFoam has a 65-gallon poly tank."

The next component is a pump. The plant blend control system usually controls pump output.  There is a pulse counter or flow meter which determines water amount. A VFD is employed to control pump flow. It’s a loop where the components are inter-dependent on the each other.

The final component for adding warm mix capability to your plant is the injector. The injector is installed in the asphalt delivery piping prior to the liquid entry into the mix chamber of the drum. The injector, says Schwan, suspends the water in the liquid asphalt cement – creating the foam that allows you to lower your burner setting, which is the “warm mix asphalt”

"There are some electrical components and some welding," says Jones. "But once I have the component on site, it's typically installed in a day."

For many, the benefits of producing WMA are well-known: less fuel and energy is used during production, less emissions and smell is produced, compactibility of the pavement is improved, etc. Jones says all these benefits are realized and then some.

"When you produce a base mix and drop the temperature an average of 30 to 40 degrees, you're saving energy," he says. "You're burning less fossil fuel and producing fewer emissions. You're being green. You're being a good neighbor.

"The first time we switched a plant over to warm mix, you could immediately see the difference," he continues. "There was no big plume of smoke rising up. The people and communities around your asphalt plant will notice that."

Jones also notes that because most of the flash points of the PG grade liquids are lowered, there is less smell to bother neighbors.

"Even if you're only dropping the temperature of a mix by 20 degrees, you're still making an impact," he says. "It's still 20 degrees, and you'll still see benefits of that temperature drop."

"The WMA gives a good film coat to the aggregate," says Jones. "There's less segregation and better bonds, so ODOT and InDOT allow us to have a higher RAP percentage in the warm mixes."

Jones notes that the high cost of oil a few years ago didn't factor into the company's decision to start outfitting its plants with WMA capabilities.

"Yes, you're saving energy and burning less oil," he says. "But, really, the reason to start switching is that this is the future. The positive of WMA far outweighs the negative. I feel warm mix will be mandated from the federal government back to the states in the next four or five years. That's the way it's going to be, so you might as well get used to it."