Tired of That "Amping-Up" Problem?

When "amping-up" is a persistent problem with your drum-mixer and drag system, foaming the liquid AC can solve the problem … and save money in several different ways 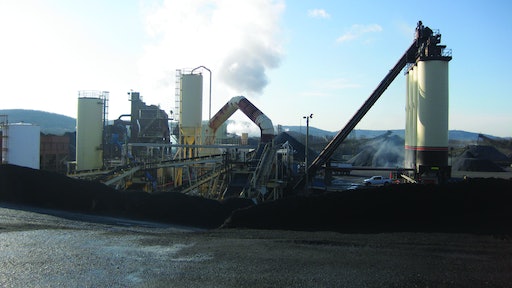 You know the term amping-up (or over-amping), of course…but you won't find it in a normal dictionary. And if you try to Google it on the Internet, you will come up with an explanation that has something to do with the influence of a stimulant such as coffee or increasing the volume of a music playback device. Unfortunately, over-amping is much more serious in asphalt production than a simple coffee high or loud, blaring music.

Until about a year ago, over-amping was an almost daily problem for the plant operator at EJB Paving & Materials Company in Leesport, PA. E. J. Breneman LP (as the parent company is known to most in the industry) traces its history back to 1942 when Earle J. Breneman purchased a construction company located in Pottstown, PA. Over the years, the company continued to grow and diversify.

Today, E. J. Breneman LP operates in about 27 states with a broad range of services including hot mix and warm mix asphalt (HMA and WMA) production, paving, cold in-place recycling, and full-depth reclamation. Asphalt production is done at their Leesport, PA location where they currently have two facilities: a 500-tph dryer-mixer and a 3.5-ton batch plant.

With such a range of technologies and equipment, it was not unusual to encounter problems, large and small. But the over-amping problem was frustrating.

"We had always had a problem with our drum-mixer and our drag system over-amping during start-ups," says EJB's plant manager Jim Marks. "If we hit the redline for the drum or the drag, one or both of them would shut off. Those were two problems we didn't need."

Marks explained that they tried several things to solve their over-amping problem. "We would run the burner pretty high to get the material coming through the drum extra hot," he says. "And that would sometimes help to lower the drum amps. Trying to control high amps on the drag was a little different: We had to get the drag hot in order to keep the amps down. This meant opening a gate and directing the material to our drop-out pit. That usually controlled the over-amping problem…but everything that went into the pit was scrap material and, therefore, it was money lost."

The over-amping problem had to be solved in order to control costs and mix quality. Marks had heard that running a warm-mix product might help solve the problem. "We visited a number of different operations in different states," said Marks.

"The system that really caught my attention was the AQUABlack Warm Mix Asphalt System offered by Maxam Equipment. In meetings with Maxam's technical people, we were told that by using their foaming procedure, we could cut down on our amps. They were right. The very first time we ran it, the amps stayed down in the drum and the drag. It  was the first time in years that a finished product did not have to be dropped into the pit to control the drag amps."

What was causing the over-amping problems on the drag? "As your raw aggregate works its way through the drum, the temperature of the material starts to climb just as it should," says Marks. "Then you kick in your asphalt pump and start adding liquid asphalt cement to the hot aggregate. Suddenly, the drum's drive system is stressed and the amps shoot up. At the same time, the drive system on the drag is also stressed, the amps increase dramatically, and a lot of material coming from the mixing chamber is not coated and is dumped into the pit.

"But with the Maxam AQUABlack system, as soon as we start running the liquid asphalt, we start the foaming system," he continues. "Everything is coated immediately. It is very rare that we have to open up the drag to drop any finished product into the pit. And when the finished product goes out to the paving crews, they never see uncoated material anymore."

How foaming solved the problem

According to Maxam engineers, the lower amperage, improved coating, and better workability can be attributed to the high-pressure water system (up to 1,000 psi) that creates micro-bubbles which serve to improve the film thickness on the aggregate. This allows the foam to last longer than it does with conventional low-pressure foaming systems.

"This system really solved some major problems for us," said Marks. "I think we cut our pit material by about 70%. The Maxam system probably paid for itself in the first season with what we saved on that scrap material alone."

When asked if they were running WMA in the system, Marks explained that they foamed every day, but they didn't run a true warm mix very often because of some local restrictions.

"Because warm mix is a rather new technology, it is taking a bit longer to catch on here in Eastern Pennsylvania," he explains. "Usually, work performed on township roads and under PennDOT contracts require a special waiver by the township or PennDOT if you are going to run warm mix. What we have been doing instead is running a low-temperature (from 285°F to 290°F) hot mix with foaming. That is all we had to do to solve the over-amping problem.

"But this year, we plan to run a lot more true warm mix - at 250°F," Marks continues. "The positive benefits are obvious: less drum amps, less drag amps, more evenly coated aggregate, and very good workability. We didn't have one instance last year where the drum shut off because of amperage."

Marks described EJB's use of reclaimed asphalt pavement (RAP) last year. "2010 was our first season with the Maxam foaming system," he says. "For some time, we had wanted to start using more RAP in our mixes. By using the foamer, we went from an average of 15% to 18 % to an average of 23%. This season, we intend to increase that percentage some more - probably to 28% on jobs that are not PennDOT projects."

EJB management is convinced that WMA is the product of the future. Why? "Mainly because of its two main features: it helps save money and the end-product is good," says Marks. "For example, we shipped our mixes on a lot of long-distance hauls to paving sites last year. The only time we ran into a problem was in November when the temperature outside was 30°F and we were shipping it 50 miles to the paving site. I don't care what you're using in those conditions, it is going to be a little tough on any mix."

With a new paving season underway, Marks is looking forward to a year that is free from over-amping problems. "As far as our company is concerned, we will foam our product every possible day that we can this year."

Gary Gulick is a writer and graphic artist in Kearney, MO. He has worked for more than 25 years writing about the road-construction industry. He can be reached at: gulick@wordsmithpublishing.com