Realizing the value of RAP 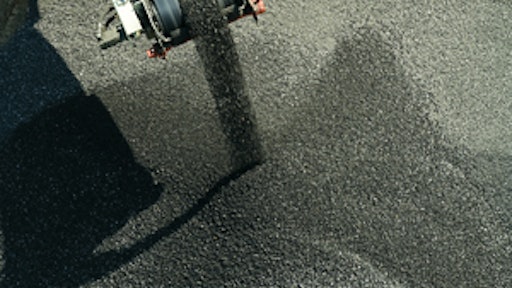 Anyone who is considering the potential value of using reclaimed asphalt pavement (RAP) in their hot-mix asphalt (HMA) mixes should factor in this common-sense point: It's not a matter of if - or even when - RAP will become a key part of everyday hot-mix production. The move toward using RAP is underway right now.

It was that common-sense point that prompted C.R. Jackson, Inc., an asphalt producer headquartered in Columbia, SC, to add a new piece of equipment to their growing array of production tools. Clarke DeHart, vice president at C.R. Jackson, recently voiced his opinion about RAP by saying the use of RAP in HMA mixes was considered to be an added benefit by some producers in the past, but it will soon become an economic necessity for almost all producers.

"As prices increase in the asphalt industry, the use of RAP is going to move from the back burner to the front burner," says DeHart.

The C.R. Jackson company has been in business since 1972 when its founder, Richard Jackson, began offering grading, clearing, and utility work to homebuilders in the Columbia area. In 1989, the company purchased its first HMA plant, thereby establishing itself as a full-service site contractor.

Today, the company operates two HMA facilities: an Astec Double Barrel dryer/mixer plant located in Columbia, and a Cedarapids plant in Richburg, SC. A major part of the firm's business involves highway paving projects, so when its state department of transportation started allowing higher percentages of RAP in the mixes, the management of C.R. Jackson immediately welcomed the opportunity to expand their RAP-handling capabilities.

"The percentages of RAP allowed on state jobs are different for every mix," says Dehart. "But we're usually able to run as high as 15 or 20 percent. That's the main reason we bought the Fold 'n Go screening plant; so we would be able to put that higher percentage of RAP in there."

All of the vibrators have five force-amplitude settings on adjustable slip counterweights and hydraulic controls for variable angle operation. The plant can produce up to 300 tph or more.

At the C.R. Jackson facility, the Fold 'n Go plant is placed behind a Telsmith crusher. This is because the company's RAP comes from various sources: some of it is milled material, some of it is in chunks, and some of it is plant waste. As a result, the size of the RAP can be unpredictable.

"We originally tried running only straight millings through the Fold 'n Go unit without any prep. But if anything was in there other than straight millings, we ended up with a good bit of oversized material," says DeHart. "We found that it was better to prep the material by running it through the Telsmith crusher. Our overs have gone to virtually nothing at all."

Two sizes of RAP are produced using the screening plant: minus 4 and plus 4/minus 0.5. These two sizes can then be fed into the Astec HMA plant's multiple RAP bins, allowing the company to achieve higher-quality mixes with larger RAP percentages.

"When we made the move from running virgin mixes to mixes with RAP in them, our quality did not suffer at all. It just was not an issue," says DeHart. "There are a lot of people who think that when you start putting unprocessed material in there, you will see a value decline. But we treat it just like virgin aggregate and put the same amount of value on it. In doing that, we have been allowed to increase our percentages and run RAP in mixes that we hadn't been able to before. We are very happy with it."

In addition to fractionating RAP at the company's Columbia location, C.R. Jackson utilizes the Fold 'n Go plant's mobility to provide its screening features to its Richburg facility, as well as to Satterfield Construction, in Greenwood, SC.

"We've moved it four times in the six months that we've had the unit," says DeHart. "It's very easy to move. It only takes the operator one hour to fold it up and get it ready to go. Of course, then he has to clean it before we can take it out on the road. And then, once it's at the new site, it only takes about one other hour to set it up and get it running."

DeHart says the same operator is in charge of the Fold 'n Go mobile screening plant, no matter where it is doing the work.

"He does it all - everything that has to do with the screening plant - including running the loader," says DeHart. "He is assigned to that one machine. Wherever it goes, he goes. He stays with it, he operates it, and he maintains it."

The ease of use was a key point in the company's decision to buy this particular unit.

"The operator, Gary Gergen, thinks it's a neat machine. We used to have an old, off-brand screener that just would not do what he wanted it to do," DeHart says. "I kept telling him that we had a Fold 'n Go on order and that it was going to work much better. And within two days of delivery, he was very happy. He is very satisfied with his new equipment.

"We try to buy new equipment that our people will have confidence in, and that is easy to use," DeHart says. "And this equipment certainly meets those criteria."