Density problems can often be solved by looking at your paving operation. 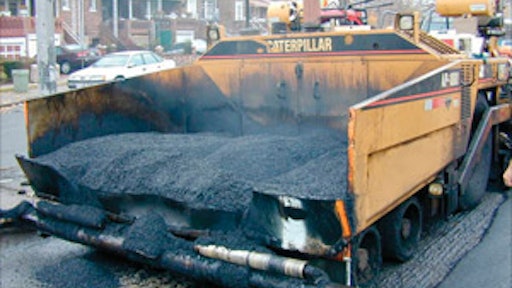 Smooth, dense and uniform - in the world of hot mix asphalt, these are words we live by. These three simple words precisely describe what makes a quality HMA pavement. Three characteristics that are so interlaced that it's virtually impossible to obtain one without the other.

We've known for decades about the benefits of density and its relationship to long-term performance of the HMA mat. Continuing studies are showing smoothness to be of almost equal importance, but what about uniformity?

Quality Assurance specifications go a long way to factor uniformity into the payment equation, but are the paving crews that are installing the HMA or the QA and QC inspectors getting the message? Do they understand the concept of things like hitting the target density consistently or are they satisfied with just falling between the upper and lower quality limits?

As a pavement engineering consultant, I'm frequently retained by industry and agency alike to address this very issue, although often times, the client isn't even aware what the issue is, they just know that are having a problem with obtaining specified requirements.

More often than not, the perceived issue is with density. A contractor will be working on a QA project and is experiencing difficulty with density that is resulting in payment penalties.

Convinced the problem is with the compaction effort, the client will ask me to work with the roller operators and establish a more effective rolling pattern or use additional rollers.

When I inquire about the operations of the paving crew, the client often replies the paving operation is working fine, it's density they are having a problem with because "no one has complained about the mat quality."

Well, here's the question ... Isn't density one of our three defining elements of mat quality?

With many pavers capable of placing a mat at about 85 percent of maximum density, the paver is giving us the most compaction in the whole process. Wouldn't the paver than be the most logical place to begin our quest for density?

In fact, it usually turns out the client isn't experiencing density problems at all, but that the issue is with consistency instead. If a contractor is getting good density, but the range of compaction is all over the place, the result is often payment penalties.

The roller pattern is sound, but the paver is not being run in a constant manner. It seems that it isn't common knowledge that the paving crew is equally responsible for density and even more responsible for uniformity than the rolling crew.

The basics
I know that every situation is a little different, but let's run through the basics of how to produce a mat that is smooth, dense and uniform.

Starting at the beginning, the contractor needs to look at the production, shipping, placement and rolling operation as a whole. The plant must be capable of producing the required number of tons per hour, and there must be enough trucks to ship the mix to the job to meet placement demands.

The paver needs to be moving at a pace not to exceed the delivery rate, nor should it be moving so slow that trucks bunch up on site.

In addition, enough rollers will be required to keep up with the paver speed and still obtain required density. In basic terms, it's a great big balancing act with the center point being the paver.

The goal is to keep the paver moving at all times, or as close to it as possible. If the paver stops for any length of time, mix in, under and behind the paver is cooling.

By the time this mix is placed, it has cooled to temperatures significantly lower than that placed directly following delivery.

Material transfer vehicles will assist with consistent paver speed, but are not required. Much cheaper solutions can be found by using good planning tools like equations that factor how many trucks should be needed and calculating paver speed based on the rate of delivery, mat density, width and thickness.

Paver operation
Proper operation of the paver while it's moving is also critical. It's not enough to get mix to the paver; it has to be done constantly as well. The hopper needs to be loaded in a metered manner, not too full, not too empty.

Hopper levels should be kept around 50 percent, no less than 25 percent - the drag slats should never be exposed.

By maintaining consistent hopper levels, it makes it possible to maintain a consistent head of material in front of the screed. This is where everything comes together.

The screed gives us shape, thickness and density. Without a consistent head of material, the mat will not be placed uniformly. The automated feed control system should be employed to help out.

Augers are most effective when they are turning as close to 100 percent of the time, no less than 85 percent. By doing this, the screed will be able to maintain depth and help the material to be spread uniformly across the mat.

Paver maintenance
Maintaining the paver is also important. Making sure the augers are in good condition, not worn. Keep the augers all in the same condition, replace all augers at the same time to insure uniform placement.

Strike-off plates need to be in good condition (no dents) and adjusted to the proper height. Screed extensions are another place to look for potential problems. They should be set to match the main screed elevation and angle. If the extensions are open beyond 18 inches, auger extensions should also be used to insure that the proper amount of material gets the outside of the mat.

These and many other seemingly minor and often overlooked items can add up to big problems come payday. Taking steps to insure the paver is operating in a consistent manner will help insure uniform placement and compaction of the HMA.

So, the next time you're having "density issues," take a look at the placement operation and make sure everything is in order before you start blaming the rolling operation. And if you're taking steps to insure uniformity and density, smoothness will follow all by itself.

Matt LaChance, VHBinc., can be reached at .