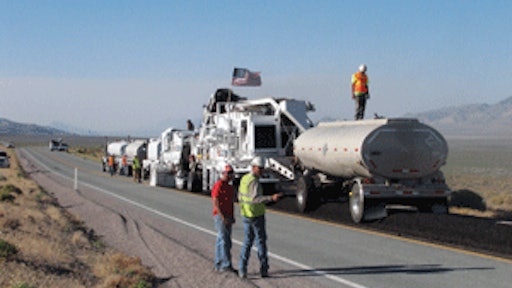 With highways and paved roads around the world exhibiting surface defects in need of repair, utilizing an innovative road reconstruction process such as cold-in-place recycling (CIR) is a cost-effective and environmentally friendly alternative to more conventional methods of rebuilding asphalt roadways.

The subbase created in this way has the ability to keep underlying base cracks from migrating to the surface. A final overlay of traditional hot mix was then applied after a curing period of approximately two weeks. The four Nevada sites were located on U.S. 93, S.R. 447, S.R.757, and U.S. 50.

In Coughlin's CIR train, a Roadtec 950-hp RX-900 cold planer provided the train's propulsion, towing a RT-500 cold recycler and a nurse tank for the emulsions. It also pushed a water truck and a slurry tanker that are always with the train.

The RX-900 also pushed another emulsion tanker and slurry tank when present to replenish the tankers hooked to the train. Those two replenishing tankers are attached to the train just long enough to pump off their products and then go to a staging area where they are refilled to return to the train.

Darren Coughlin says the refilling typically took place five to eight times in a workday. Careful planning and timing of these material transports has a positive impact on the productivity of the train.

A 12-foot 6-inch-wide cutter drum was used on Coughlin's RX-900 in this train and operated in the downcut mode. Coughlin preferred the gradation produced with the downcutting process. The RX-900 is also capable of upcutting in this same rear-loading configuration. Bi-directional milling capability is a unique feature of Roadtec cold planers.

MOBA brand sonar grade and slope controls were used with the RX-900 milling machine to cut the surface to the required profile. The pavers that followed also used automated grade and slope devices to hold spec.

Maximum width that can be handled in one path with this process depends on the amount of material put through the RT-500, which is designed for maximum throughput of about 600 tons per hour; as well as the paver production rate. A practical maximum width estimate would be 20 feet. A 13-foot 4-inch-wide cut was made on the Hwy. 93 portion of the project.

Coughlin "precut" a narrow path using a Roadtec RX-60 cold planer and had it deposit the material to one side. The RX-900 in the CIR train then walked over that material and incorporated it into the final milling pass.

Compaction specs are among the variables that influence the depth of cut. A typical depth of cut would be between 2 and 5 inches. Coughlin cut 3 inches deep on this project. The resultant 3-inch thickness of the CIR base layer provided sufficient stress-absorbing characteristics to keep any underlying reflective cracking from coming through to the top layer of HMA, according to Coughlin.

Following behind the cold planer was the Roadtec RT-500 cold recycler. The unit, which Roadtec says was being used on the job as part of the machine's prototyping program, can handle up to 600 tph of material. The RT-500 cold recycler is designed to crush and screen the RAP produced by the RX-900, while its pugmill mixes the emulsion with the recycled materials.

The RT-500's JCI brand double-deck screen received the milled material from the RX-900 conveyor. Any oversized material went through the RT-500's Telsmith 3048 impact crusher and back to the screen via a two-conveyor return circuit.

The conveyors were outfitted with cleated belts for maximum production. A water spray system prevented dust buildup on rollers and the conveyors were covered for safety and to prevent roll off

Material that passed the screen dropped onto a 48-inch weigh belt. The belt's electronic scale, accurate to +/- 1 percent, communicated with the blending computer, which in turn adjusted the flow of additives that went into the RT-500's JCI/KPI Model 52 pugmill mixer. This twin shaft mixer had a capacity of 600 tph.

After a thorough mixing in the pugmill, the material was discharged in a windrow onto the roadway. The whole RT-500 system was run by electric motors powered by a Caterpillar C-9 generator set.

A windrow loader followed behind to pick up the material and feed it to a conventional paver. A heavy pneumatic, vibratory roller was used to compact the material to the required density.

Couglin recycled 100 percent of the existing material to construct the crack barrier. Mix designs could be as varied as conditions require.

For this project Coughlin added 2.5 percent PASS emulsion supplied by Western Emulsions; and 1.5 percent lime slurry (by weight) was injected as well. The slurry was approximately 35 percent solids to water by weight and prepared by a nearby slaking plant.

Calibration routines for the Roadtec RT-500 cold recycler were worked out by Roadtec to achieve correct proportions of liquids and solids per specification. A BearCat brand 1,000 gallon liquid calibration trailer was used to help with the calibration of the RT-500's emulsion pump.

After an approximate two-week curing period, Frehner Construction placed a 3-in. hot-mix overlay on top of the 3-in CIR base.

The cost-effective benefits of CIR are clear, according to Coughlin. First, the process saves time. With a single train of equipment, the reconstruction is done in several hours versus several days. Secondly, the process generates substantial savings in the cost of raw materials, manpower and energy. And finally, the recycling process extends the service life of roads, which is important to road agencies and taxpayers.

The CIR process preserves natural resources by reusing 100 percent of the old HMA layer. This also alleviates trips to a landfill, thereby reducing transportation costs and fuel emissions. With a train of equipment moving in sync to reconstruct the roadway, the overall emissions are reduced due to decreased trips to and from the construction zone.

A rating system called "greenroads" is used to award credits for new, reconstructed, and rehabilitated roads based on sustainable practices. For more information on greenroads, visit www.greenroads.us.