Nevada has successfully maintained its road system with cold in-place recycling over the past decade, but the Golconda I-80 was its first interstate CIR. 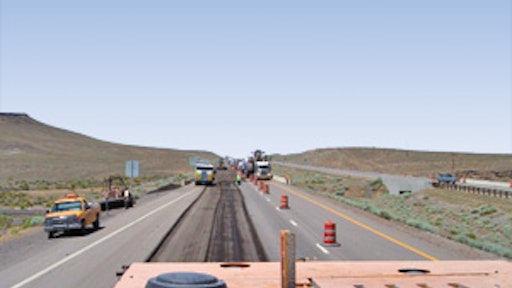 The Nevada Department of Transportation (NDOT) has been successfully performing cold in-place recycling (CIR) since the mid 1990s, and this past summer it decided to put the process to the test on Interstate 80 west of Elko. The Humboldt County project, between MP 29.38 and 42.19 was probably not the easiest debut of NDOT's interstate CIR attempt, due largely to the heavy traffic volume and steep grade required to traverse the Golconda Summit, but the resulting success proved it to be a most viable approach to rehabilitating the state's main east/west corridor.

The construction strategy consisted of CIR three inches of the existing asphalt surface and then placing four inches of NDOT's specified Plant-mix Bituminous Surface overlay (a dense-graded mix) followed by a ¾ inch of open-graded wearing course. Based on the existing condition of this portion of I-80, NDOT believed this rehabilitation strategy would be the most cost-effective approach; however, since it was the first interstate recycling project in the history of NDOT, there was a lot of anxiety leading up to construction.

The amount of traffic that I-80 carries was of primary concern in the planning and safe execution of the recycling project. The Annual Average Daily Traffic (AADT) at the time of recycling was 6,620, with approximately 50 percent of that volume being truck traffic. Based on the AADT, percentage of trucks, truck equivalency factor, and the projected growth rate of vehicle usage, the 20-year Equivalent Single Axle Loads (ESALs) was calculated to 14,988,198. To protect the recycled mat from a high percentage of truck traffic, public traffic was not allowed to run on the recycled surface for a minimum of three days. Once the first two-inch lift of dense graded hot mix was placed, public traffic was allowed to travel on the surface for a maximum of 14 days before the second lift had to be placed.

Another factor that posed an added challenge was whether or not the CIR train could traverse the steep incline over Golconda Summit (a six percent grade). Normally, the recycling train would travel downhill due to the weight of the equipment. However with safety concerns over the recycling train traveling against the flow of traffic, NDOT requested that construction activities flow with traffic. As a contingency to assist the train up the steep grade, a Cat 988 loader was attached to the front of the train and used several times to help pull the recycling train up the steepest portion of the grade.

The final concern in executing a recycling project on this major interstate was completing the work to protect the CIR mat from the harsh winter weather conditions the Golconda Summit endures. Timing was critical and NDOT wanted the recycled mat covered with the new hot mix overlays to prevent any weather-related damage to the recycled material. But the timing and coordination between the recycling contractor, Valentine Surfacing, and the paving contractor, Frehner Construction, allowed the work to begin in March and to be completed in September. NDOT allowed 220 working days for the project, which was finished in only 140 working days. For NDOT, the project was hailed as a complete success.

Vancouver, WA-based Valentine Surfacing performed the CIR of the existing asphalt roadway, milling 563,000 square yards at a depth of three inches of the old pavement surface on the 13-mile-long project.

To minimize traffic disruptions, the interstate project was divided into approximate six-mile segments in east and westbound directions, allowing milling and paving to be conducted simultaneously throughout the duration of the work. Working with general contractor, Frehner Construction, a paving contractor based in Las Vegas, Valentine milled the inside 12-foot-wide travel lane along with the inside 4-foot-wide shoulder using a CMI Roto-Mill, which conveyed the millings to a screen and crusher (specifications required that all milled material had to be sized at minus 1-1/4 inches), which then transferred the processed millings to a pugmill where the cationic medium set (CMS-2S) emulsion was added. The recycled asphalt was then deposited in a windrow behind the CIR train for laydown and compaction.

The same process was followed on the outside 12-foot travel lane, and again on the 10-foot-wide outside shoulder, according to Chuck Valentine, owner of Valentine Surfacing.

"Each CIR project is a little different, and on this one Nevada specified the emulsion we used as well as adding a lime slurry during the milling process," Valentine says. "The lime slurry acts as an anti-stripping agent, and helps cure and strengthen the recycled asphalt."

The end result of the CIR process is a treated base course, after it has several days to cure, ready for a new hot mix overlay.

Ready for the hot mix

With the concern NDOT expressed about leaving the recycled mat unprotected over the winter, Frehner established an aggressive paving schedule to complete the project in one construction season. Frehner outfitted two paving crews, one to place the recycled cold mix and one to place the hot mix.

According to Gary Isaman, Frehner's Elko, NV area manager, about the only difference in placing the cold mix versus the hot mix was the lag time between placement and compaction.

"We had to wait a half hour to 45 minutes after the paver laid the cold mat before we could begin our rolling pattern, because it took that time for the lime to begin setting the emulsion," Isaman says. "Once we could get on it, we were able to achieve 90 to 92 percent density."

Project specifications required up to 10 days for moisture content in the recycled mat to drop to 2 percent before Frehner could begin placing the hot mix, but due to weather conditions, the curing process took only three to five days.

"We used pneumatic rollers on the cold mix, finishing with a steel-drum roller, and steel and pneumatic rollers on the hot mix," Isaman say. "We achieved are required 92 percent density on the 2C (hot mix) and the only time we operated our rollers in a vibratory mode was when we did a re-roll of the cold mat prior to placing the hot mix. NDOT specified the re-roll for additional compaction density before placing the new asphalt. We also achieved the required Type A smoothness spec required by NDOT, which meant we didn't have any grinds to correct any detected surface deviations. (NDOT's Type A smoothness index allows 5 inches of ¼-inch deviations per lane mile).

As Nevada continues to use CIR as a cost-effective maintenance approach, its past success supports the efforts to expand its use on interstate road projects.

"For the past 15 years, Nevada has been successful in cold recycling low-volume (traffic) roads, and I knew they could be successful in cold recycling an interstate road," Valentine says. "A lot of the restrictions concerning traffic and preventing traffic on the recycled mat until it could be covered with new asphalt had to do with NDOT's desire to make this first interstate cold recycling project successful. But as the project moved along, we were able to convince them (NDOT) that they could allow traffic on the recycle mat and not worry about damaging it before the new asphalt was placed."

The CIR process saved a considerable amount of time and money compared to Nevada's conventional Road Bed Modification rehabilitation, where 8 to 10 inches of road surface is pulverized and 2 percent cement slurry is added to stabilize and strengthen the pulverized base before a 4-inch hot mix overlay is placed.

"They realized that by being able to improve more miles with the same dollars they were spending on their old rehabilitation approach, they would be able to raise the overall quality of their road system," he continues. "In fact, Nevada's road quality rating has gone from a #30 to a #4 during the time the state has been using CIR as a preferred rehabilitation approach.

"Most states using CIR report a life cycle from seven to eight years up to 12 to 15 years," Valentine adds. "Nevada's pavement management analysis is telling them that they're getting 10 to 12 years of additional service life out of a
road by using the CIR approach, and as the technology (the emulsions in particular) improves, CIR is producing performance characteristics similar to hot mix."